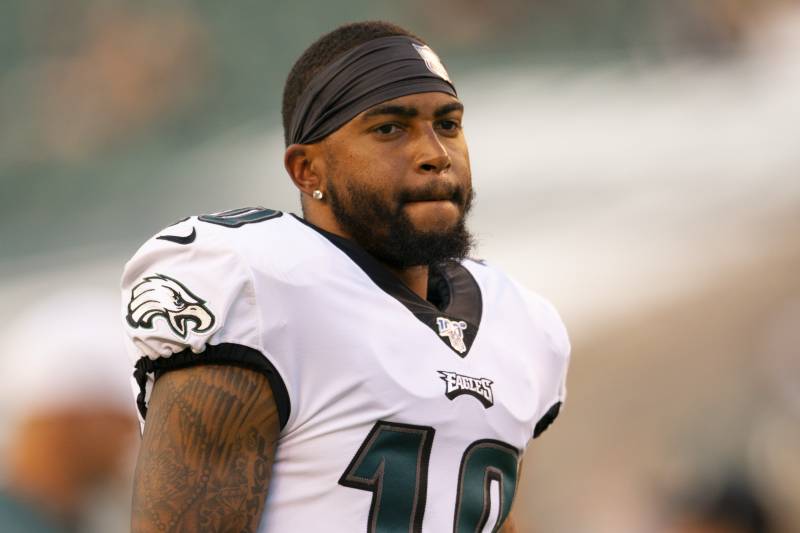 The past couple of months have been extremely rough for America. The death of George Floyd and Breonna Taylor sparked the Black Lives Matter movement to become the most influential movement of the 21st Century.

They have been doing this to fight the hate that African Americans have been facing, and have been gaining a lot of attention for it.

They have made it clear that hate against African Americans is despicable, and it is. It is absolutely despicable.

Hate should never be directed at anyone for the color of their skin.

Unfortunately, for most of these athletes, it seems that it stops only at skin color.

Philadelphia Eagles Wide Receiver DeSean Jackson posted a quote said by Adolf Hitler saying the Jewish people “will blackmail America. [They] will extort America, their plan for world domination won’t work if the Negroes know who they were.”

After this clearly anti-semitic post saying that the Jewish people were planning world domination by agreeing with the man who murdered 6 million of them and that they will extort America for personal gain, you’d expect that people would call him out on a hateful message, right?

I mean, after all, Drew Brees had to issue a formal apology for saying that he disagrees with those who disrespect the American flag and LeBron James himself made a long tweet calling Brees out on his ignorance saying:

“WOW man. Is it still surprising at this point? Sure isn’t. You literally still don’t understand why Kap was kneeling on one knee?? Has absolute nothing to do with the disrespect of (flag emoji) and our soldiers (men and women) who keep our land free. My father-in-law was one of those men who fought as well for this country. I asked him question about it and thank him all the time for his commitement. He never found Kap peaceful protest offensive because he and I both know what’s right is right and what’s wrong is wrong! God bless you.”

Several NFL players have also stated that they do not forgive Drew for his remarks.

So if something like disagreeing with kneeling for the flag can stir up this controversy, it’s fair to expect the same for quoting Adolf Hitler and agreeing that the Jewish people are power-hungry monsters should be called out too, right?

Aside from Julian Edelman and Mitchell Shwartz, both of whom are Jewish, no one has.

LeBron James is being called in particular because of how loud he is on eliminating hate and fighting for Social Justice.

LeBron’s political views in particular may not be as great as they seem.

Remember when the NBA was calling out China for how horribly they’ve been treating Hong Kong? LeBron was one of the few players to not say anything about that either.

It appears LeBron only cares about hate when it’s directed at his people, meaning he’s more just pro-black than anti-hate.

He literally said “If YOU ain’t wit US, WE ain’t wit Y’ALL!”

So I believe the quote should be changed to: “If YOU ain’t LOOK LIKE US, WE ain’t wit Y’ALL!”

That more accurately describes the situation as he has proven time and time again that he only speaks out for his own people and not hate everywhere.

He isn’t the only one guilty of it, though.

Stephen A Smith, the most famous sports analyzer, was very slow to talk about DeSean Jackson’s tweet, and when he did, he was mainly talking about his annoyance that they will no longer be focusing on Black Lives Matter as much instead of talking about how wrong what Jackson posted was.

Dozens of players such as Damian Lillard, Jaylen Brown, Trae Young, and more have all expressed that hate has no place and that Black Lives Matter but were also silent when Jackson’s tweet occurred.

It makes you wonder, are they truly anti-hate? It seems they only care when their people are affected.

Of course Black Lives matter, we all agree, but so many have made a point of emphasizing that when they say that, they know other lives matter too, but they have yet to start showing it.