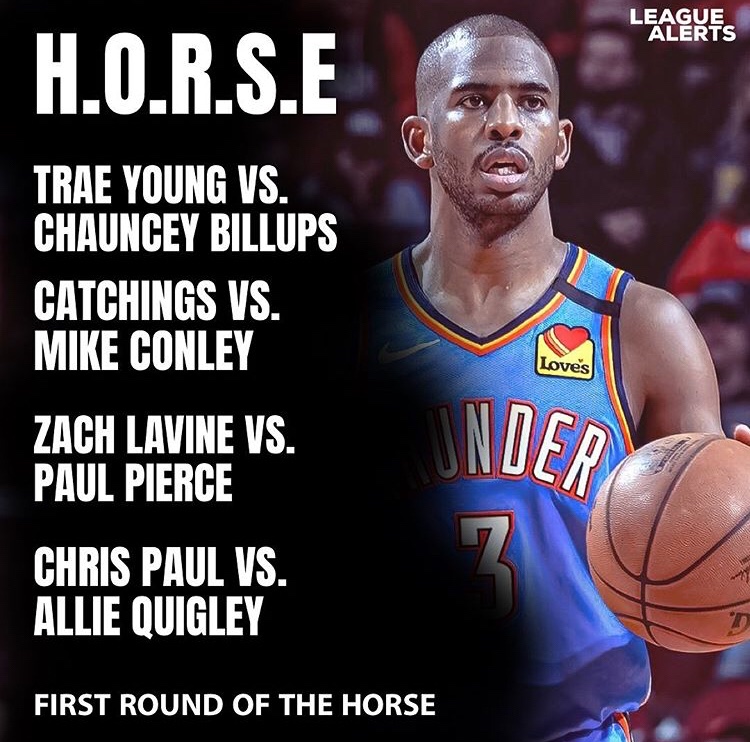 The four matchups for the NBA’s Horse tournament were recently announced, featuring NBA players, NBA legends, and WNBA players. The competition will be held at the respective players’ homes, on indoor and outdoor courts.

With no professional sports right now, this may be the best entertainment we can ask for. In the spirit of the NBA organizing the competition, here’s a little preview of each matchup.

One of the NBA’s best young stars and shooters takes on one of the better guards of the 2000s in Billups. Trae has already proven he has insane range on his jump shot, and can hit shots on the move. Chauncey hit his fair share of tough shots and clutch shots, so both players will be able to be creative here.

A recent WNBA hall of fame inductee, takes on a current NBA star in Mike Conley. Both have been in countless big games throughout their careers, and are both very crafty players. Mike will have to be on his best game to ensure he advances in this matchup. Either would likely have trouble answering Trae Young’s shots should he also advance.

It is difficult to think of two more different NBA playing styles. Zach, a high-flying, dunk contest champion, and Paul, a clutch shooter who mastered the mid range and step back in his NBA career. Let’s just hope Lavine keeps the 360 free throw line dunks until Paul is at HORS. The most interesting prediction will be who Paul Pierce likes in this matchup.

A matchup between an NBA legend and future hall of famer, and a rising star in the WNBA. This matchup seems straightforward, as Chris Paul is one of the most creative shot makers and point guards of the 2000s. Again, it seems unlikely either competitor could realistically compete with Zach Lavine, if he is permitted to dunk in the competition.

Basketball fans can rejoice, as there is finally some sort of competition for us to watch and enjoy. And we can anxiously wait for the likely championship matchup between Trae and Lavine, potentially a top 3 shooter against a top 3 dunker in the NBA.

Here is a classic matchup between Rajon Rondo and Kevin Durant in 2010.