The Deshaun Watson case: A timeline of events thus far 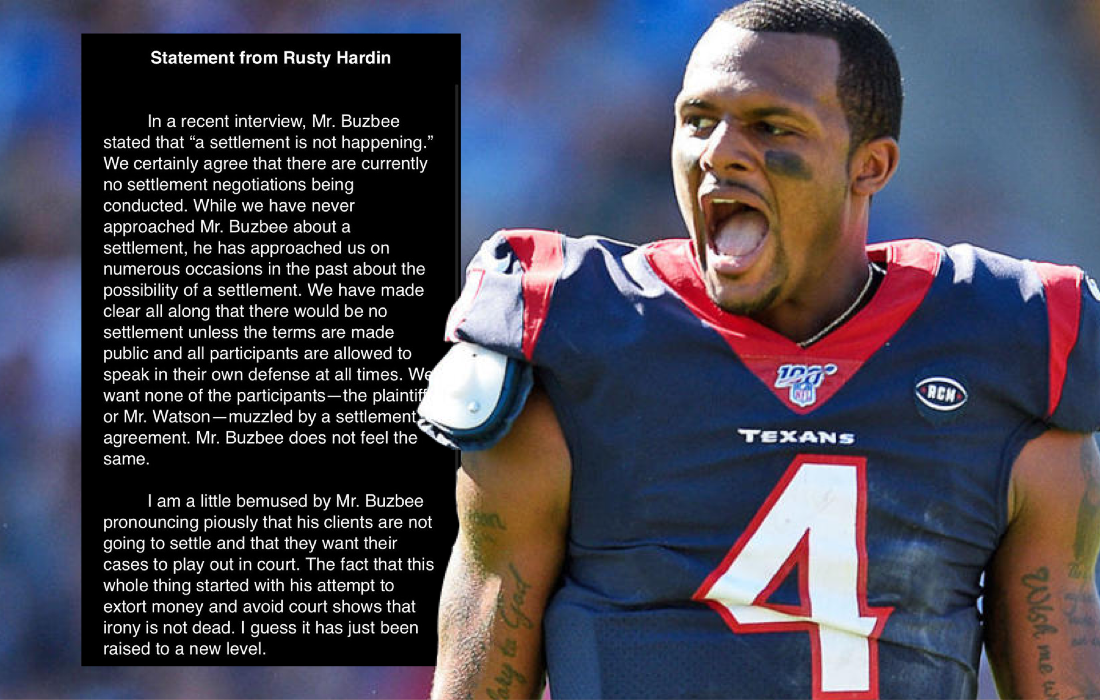 In January of 2021, star quarterback Deshaun Watson requested a trade. The team was struggling and showing no signs of improving long-term, and so Watson decided to make a change. There was a lot of speculation that teams such as Denver, Carolina, or New England could make a move for the star quarterback, but in March a huge roadblock was hit in regards to the Deshaun Watson Trade saga.

Lawyer Tony Buzbee went to instagram on March 16th to announce that he was working with victims of sexual abuse to file civil suits against the Houston Texans star.

To summarize his post, he claims that he’s taking this case to fight against a powerful and famous individual who was leveraging his fame and notoriety to silence these women. He feels that all people deserve a voice and that we can’t allow ourselves to put those with fame and power on a pedestal, and that your average person likely has more dignity and respect than those people that we idolize. He claims that he’s not intimidated in regards to this case, likely meaning he knows that he’ll be perceived as the “villain” when it comes to this upcoming legal trial.

The Houston Texans signed veteran quarterback Tyrod Taylor, showing that they may be worried about whether or not the NFL will allow Deshaun Watson.

A day later on March 17th, two additional cases were filed against Watson, taking the total number of suites to three.

Deshaun Watson’s lawyer, Rusty Hardin came out and stated that Tony Buzbee defending these women without revealing their identities was getting in the way of defending his client from the impending investigation.

Three more suits were filed against Watson, raising the total to nineteen. Buzbee filed a complaint against Watson claiming he was deleting Instagram messages, which was disputed by Rusty Hardin. He claims that Watson hadn’t deleted any messages since March 15th, one day before the original suites were filed. Buzbee also claimed that Watson was messaging his former masseuses in an attempt to settle, which was also disputed by Hardin.

Rusty Hardin released the names of 18 massage therapists who have worked with Watson, who all claimed that Watson maintained professional conduct while working with them. Hardin stated that these 18 women “worked with Deshaun more than 130 times over the past five years.”

The Police opened a criminal investigation on Watson. Watson and Hardin welcomed this investigation as they believe it will slowly reveal the identities of the accusers, which will help Watson prove his innocence.

The total number of lawsuits filed by Tony Buzbee rises to twenty-one.

Tony Buzbee files an additional lawsuit against Watson, raising the total to twenty-two.

Ashley Solis and Laura Baxley publicly come forward against Watson. Both women claim that in early to mid 2020, while providing Watson with their services as massage therapists, that he exposed himself and touched them with his penis.

Rusty Hardin later stated that Tony Buzbee and Ashely Solis was attempting to get a $100,000 settlement out of Watson, but after that was denied they filed a civil suit.

Rusty Hardin filed a motion for the women involved in this case to reveal themselves publicly. He feels as if their anonymity is impeding the police investigation, which would prove the innocence of Watson.

It was ruled that 13 out of the 22 accusers must publicly reveal themselves. Two more women who were not ordered to come out publicly, chose to do so anyways, meaning 15 of the accusers were now public, and only 7 were still anonymous.

Twenty-one women identified themselves in court, after refiling their suits with their names attached. There is now only one of the original accusers who still doesn’t have their name released publicly.

The 22nd accuser publicly attaches her name to her suit, meaning every single accuser against Deshaun Watson is now doing so publicly.

Rusty Hardin and Deshaun Watson filed a 7-page legal response, questioning the credibility of the accusers. Here are some of the claims being made by Hardin.

Roger Goodell came out and discussed how concerning these allegations are. Goodell said “We’re obviously following that and looking at that ourselves, independently, there are important steps that we will be taking as part of our personal conduct policy. When we get to that point, we will certainly make a decision.”

The Houston Texans draft Stanford quarterback, Davis Mills in the third-round of the NFL draft. This may further be cementing Watson as a former Texans quarterback.

Tony Buzbee states that he was never approached by Watson or Hardin in regards to a settlement, making it seem like he and his clients would be open to going that route if approached.

With this situation still ongoing, we don’t have all the information as of now, but we will continue to update you all on this situation as the story unfolds.