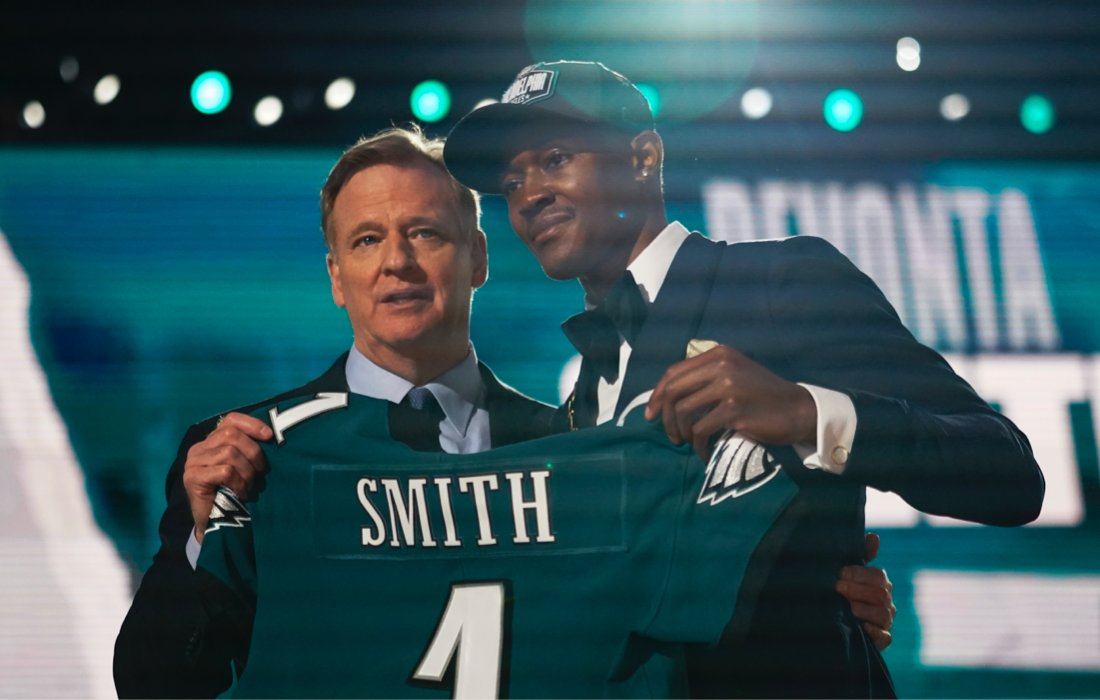 The NFL Draft has concluded and most NFL rosters are beginning to shape up for the preseason.

Some believe the Jaguars are the clear winner just based off the generational talent now at QB in Trevor Lawrence, but their needs still are there on defense, but round one has such a talented slate of players, there are just some you cannot pass up.

Let’s take a deeper look at all 16 NFC teams and their selections, and slab on a grade on if they hit, miss, reached, etc.

Aaron Rodgers wants out and it’s not good to see a corner be the first-round selection knowing some solid WRs are on the board still. Amari Rodgers was snagged up in later rounds but Terrace Marshall, Rondale Moore, and Dyami Brown were all a better fit than Stokes. A 4.28 40-yard dash shouldn’t give Stokes the benefit of the doubt over a talented receiver for the reigning MVP.

This is a home run pick, especially with JaMarr Chase and Jaylen Waddle off the board. Devonta Smith would’ve been a good pick, but knowing Dan Campbell and his grit, selecting the top tackle in the draft in Penei Sewell was perfect. Justin Fields and Mac Jones were on the board who both could win a job over Jared Goff, but it looks like Detroit has a process and plan set in place for Goff and the team.

The Vikings were confirmed to be taking Justin Fields at pick 14, before the Chicago Bears jumped up and snagged the 11th overall pick from the Giants to take Fields. Then, Minnesota thought it was best to trade back and add to the offensive line with Darrisaw out of Virginia Tech. Overall, a great pick value wise, but they should have been more aggressive if they wanted a successor to Kirk Cousins.

This was a grand-slam pick from Chicago. In dire need of a franchise QB, the Bears go aggressive and take QB Justin Fields to be the QB of the future. Although the Bears signed Andy Dalton, QB was still much a need in Chicago.

Collins must’ve stood out a ton to Arizona, as there were a couple better players on the board. The defense continues to grow in Arizona with the addition of JJ Watt.

Trey Lance is a great talent, but a lot of scouts believe he isn’t ready for a week one start. Fortunately, this is why the 49ers are holding onto Jimmy Garoppolo. If Jimmy G gets hurt or isn’t performing well, Kyle Shanahan won’t have any issue throwing a rookie QB into the fire and developing him as soon as possible.

Kyle Pitts is a generational talent that will be explosive with Julio Jones and Calvin Ridley striving for 1000-yard seasons for years to come. As great as that sounds, Atlanta still has no answer defensively for really anyone. A trade back would’ve been probably the best scenario but Atlanta really wanted Pitts according to sources. Losing two starting safeties and taking a TE at pick four is kind of shaky but it will make them more competitive against a strong defensive division with the Buccaneers, Saints, and Panthers.

I personally would have selected Patrick Surtain if Carolina wanted a corner, but Horn is still a great talent in this injury-riddled cornerback class. Horn will be a starter on the outside most likely in a Carolina secondary that lost some guys and needs some help.

The Buccaneers roster is already looking solid after bringing back the band for true Super Bowl defense. Adding any young player to the star studded roster can help in a couple ways whether it’s in a rotation or a starting role.

This was most likely the biggest reach in the draft at pick 28. There was rumblings with the Saints about a trade that could bring them to the top ten in the draft, but they decided to sit back and chill at 28. Turner can be a good player in New Orleans, but he is not a day-one talent.

The Philadelphia Eagles have missed out on a ton of talent because of their weak drafting skills, but in 2021, Howie Roseman and the front office hammered down on their commitment to QB Jalen Hurts by adding former Alabama teammate, Devonta Smith. The only question mark on Smith is the weight, which most scouts don’t believe will be a huge problem in the NFL. The Eagles could have had Penei Sewell, Jaylen Waddle, or even one of the top corners in this class if they did not trade out of the top ten, but they did acquire a 2022 1st-round pick in the deal. Smith can be a star in Philadelphia without a doubt.

The Cowboys could’ve really put the greatest show on turf with the selection of Devonta Smith, but they deferred to a trade with the Eagles, and still add a defensive piece that could patch up some run issues that were evident in 2020. With Patrick Surtain and Jaycee Horn off the board, it seemed almost as if there was no option but to take Parsons at 12. Some could argue Caleb Farley could’ve went to Dallas, but ultimately the Cowboys and Jerry Jones leaned towards the top linebacker in the draft.

The Giants were left with a decision after the Eagles snagged Devonta Smith in a deal with no other than division rival, Dallas Cowboys. The Giants decided trading back would be the best option and even snagged a 2022 first-round selection from the Chicago Bears who selected Justin Fields at 11. New York obviously wanted to add a WR after missing out on Smith, and Toney is the next best thing that was close to a Devonta Smith blueprint. Agile, shifty, and speedy is a great translation in today’s NFL, and it’s now up to Joe Judge and Daniel Jones to do the heavy lifting.

Jamin Davis was an intriguing prospect coming out of college, and ending up as a first round talent via Washington. He started as a “day-two guy” according to several scouts, but slowly climbed the ladder on most teams boards, especially the Football Team and Ron Rivera’s staff. Davis is a “culture guy,” per Rivera, and that’s the reason they went out and grabbed another defensive piece. With no QBs worth taking in round one, this pick made sense, but you would’ve loved to see Washington address the offensive line with grabbing Christian Darrisaw or Tevin Jenkins.