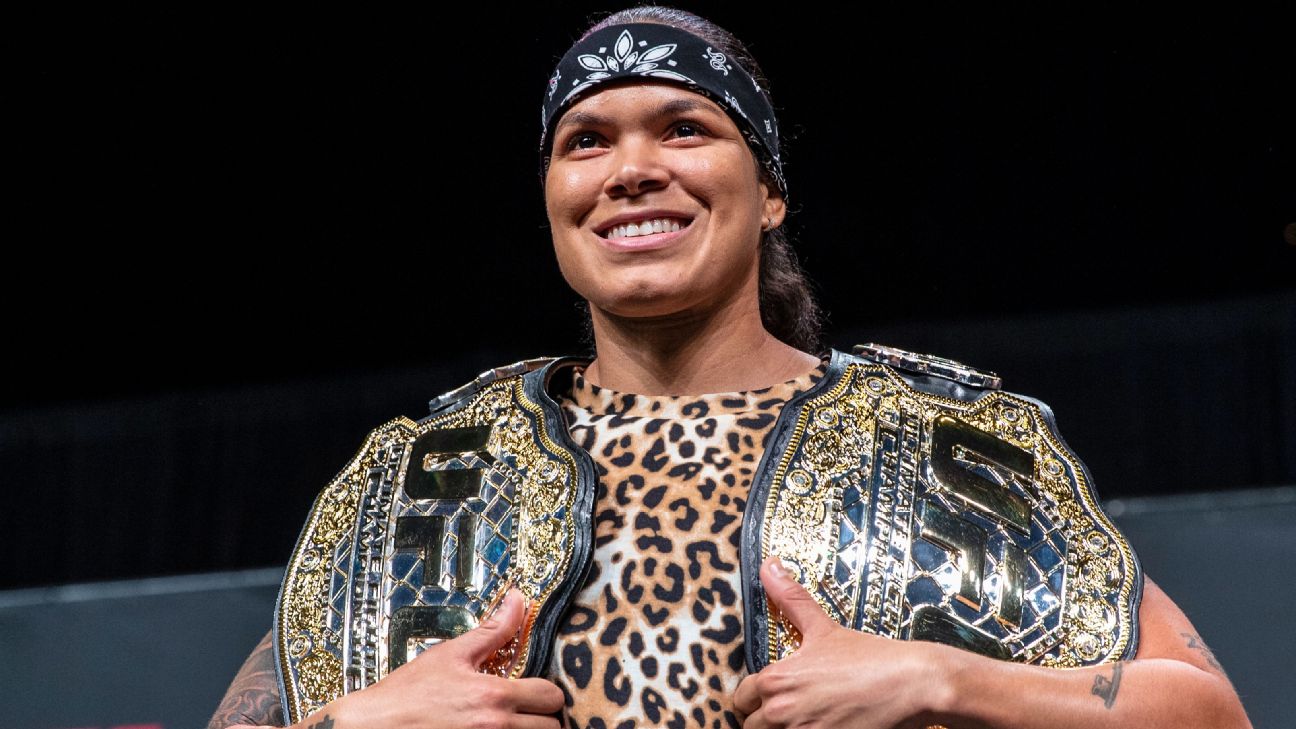 UFC 259 is set to happen this Saturday and is easily one of the most stacked cards the UFC has ever seen. The prelims may as well be its own Fight Night with non stop exciting fights there, to a Main Card destined for UFC glory with 5 incredible fights, 3 of which being a title fight. UFC 259 is going to be non-stop excitement with a main card that will for sure be worth the money you have to spend to watch it.

The Main Card is set from start to finish with absolute fire fights starting with what is set to be a legendary striking match between Thiago Santos and Aleksander Rakic in the Light Heavyweight divison. Going to a Lightweight Veteran Showdown between Grappler Islam Makhachev and Striker Drew Dober. Then the first title fight in the Bantamweight Divison between a master striker is current champ Petr Yan and a Jiu-Jitsu artist in Aljamain Sterling. The co-main event is a Women’s Featherweight Title showdown between 2 very well rounded fighters in Amanda Nunes and Megan Anderson. Finally we end the night off with a banger in the Light Heavyweight Division between the 2 beasts Jan Blachowicz the LHW Belt holder and Israel Adesanya the Middleweight belt holder fighting to become to 5th ever to hold 2 belts simultaneously.

#2 Thiago Santos vs Aleksander Rakic #4: This High Ranked Light Heavyweight is the perfect entrance for the stacked card and this alone has some incredible potential for some fireworks. Thiago “Marreta” Santos is coming off of back to back losses by the hands of Jon Jones and Glovier Teixeira and it is obviously crucial for him to get a win here. Outside of those losses his UFC resume is filled with KO win after KO win. He has 10 KO wins out of his 13 wins including wins over Notable fighters such as Kevin Holland, Jack Hermansson, and current champ Jan Blachowicz. Of course he gets to go against another Striking professor in the Austrian Aleksander Rakic. Rakic hasn’t been in the UFC nearly as long as Santos has but in his short time he’s been nothing short of great holding a 5-1 record with 2 Round 1 KO’s. Outside of the UFC Rakic has 7 other wins by KO. To say this entrance to the main card shouldn’t be an awesome striking match would be dumb to say, both these men have some thunder fists and it should be a very close fight as they are pretty equal in skill.

#14 Islam Makhachev vs Drew Dober #15: This Lightweight battle should be another very good fight as its a Grappler vs Striker match. This fight was originally supposed to happen all the way back in 2016 but Makhachev tested positive for an illegal substance at weigh-in’s. Islam Makhachev hasn’t fought since September of 2019 where he got a win against Davi Ramos. He had 3 different fights cancelled in 2020 including 2 against Rafael Dos Anjos, 1 where Dos Anjos tested positive for Covid-19 and one where Makhachev had to drop out due to injury (Paul Felder ended up replacing him 3 days before the fight where RDA ended up taking the win). Outside of his unluckiness with bouts getting cancelled he has only lost once in the UFC and that was all the way back in 2015. Currently riding a 6 fight win streak with two finishes, one by KO, one by Armbar he’s definitely going to be fresh in this fight. While Islam is a very good grappler averaging over 3 takedowns per fight you cannot rule out his striking ability as he goes against the Muay Thai master Drew Dober. Dober has been fighting since 2014 holding a record in the UFC of 9-4 with 1 NC. But what’s notable here is the fact hes finished 6 of his 9 wins and has won 6 out of his last 7 fight. This is another extremely even matchup in what should be a very good fight leading into the title fights.

C Petr Yan vs Aljamain Sterling #1: This Bantamweight battle is the first of 3 amazing title fights and will most likely be determined by whether the fight stays on the feet or goes on the ground. This fight was originally supposed to be the Co-Main event of UFC 256 in December but Yan dropped out due to Personal Reasons. Petr “No Mercy” Yan embodies his nickname pretty well, he shows No Mercy in the Octagon. Fighting in the UFC since 2018 he holds a record of 7-0. His only professional loss was back in 2016 when he was fighting in Russia against Magomed Magomedov (Who currently fights in Bellator now) where he lost by Split Decision which a lot of MMA fans consider it to be his win (Including me), a year later he goes against Magomed in a event perfectly named Payback where they once again go to decision, this time with Yan getting the win and securing the Absolute Championship Bekrut Bantamweight title. Yan is currently riding 10 in a row Pro wins with 4 of them being by finish. On the other hand we got the Challenger Aljamain “Funk Master” Sterling. Sterling is a Jiu-Jitsu master that isn’t afraid to strike averaging 4.82 Significant Strikes per minute. Sterling has been around much longer fighting since 2014, holding a UFC record of 11-3. He has 5 Finishes, 4 being by submission and 1 being by punches. Sterling last fought in June at UFC 250 getting a Rear Naked Choke win on Cory Sandhagen in under a minute and a half. If this fight stays on the feet its most likely Yan’s fight as he is the superior striker but Sterling has made it clear in interviews his goal is to take it to the ground where he is vastly superior. This is a very hard fight to guess as Yan has been able to defend 87% of takedowns attempted against him so he isn’t stranger to Takedown Defense. Should be interesting to see what happens in this one.

C Amanda Nunes vs Megan Anderson #3: This feels like an extreme trick fight for guessing who wins. Going off Vegas odds they have Amanda Nunes favored by -1250 with Megan Anderson being a +750 Underdog. But for the sake of being fair to Megan and I genuinely think this, there is no way you can count her out the fight. But you also still have to remember Amanda Nunes is still Amanda Nunes. This fight was also meant to happen at UFC 256 but was Cancelled because Nunes withdrew. Amanda “The Lioness” Nunes is a legend and quite possibly the GOAT, there isn’t much more you can say about her. Holding a UFC record of 13-1 with wins over Valentina Shevchenko (Twice), Holly Holm, Cris Cyborg, and Ronda Rousey, She has shown nothing short of dominance in Women’s MMA. She is no doubt the best striker in Women’s MMA history holding 7 KO wins while still having ground dominance having 2 submission wins, Megan Anderson sure as hell has her work cut out for her. While this definitely isn’t the most even fight of the night you can not count out Megan Anderson, Recently Megan has shown some massive glimpses of strength and in general has a pretty similar skill set as Nunes. Holding a UFC record of 3-2 with all 3 wins being by finish, 1 by breaking Cat Zingano’s eye (Cat who beat Nunes), 1 win by Triangle Choke, and 1 win by a deadly Right cross. Also notably all 3 of those wins were in the 1st round which to me is why you can’t count out Megan. She is a massive being at 6 foot tall and holding a 3 inch reach advantage over Nunes so she definitely has the size advantage. Even with that she is still facing the goat but this for sure has the potential to be an incredible fight.

C Jan Blachowicz vs Israel Adesanya C: As one of the most hyped up (and for good reason) main events in recent memory, this Light Heavyweight Title Bout will no doubt in my mind be anything short of a classic and legendary fight. As the defending LHW champion Jan Blachowicz is going to have the test of his career, winning 8 out of his last 9 fights with 5 of those being by some sort of finish, Jan is a very balanced and technical fighter who’s not only a beast at Striking but also very good on the ground and in the clinch. The ground game of Jan is definitely the biggest advantage he has in this main event as Izzy doesn’t even have a Takedown landed in his career. Another advantage Jan will have is the weight, while Izzy does have the height and reach advantage he has already said there’s a very good chance he weighs in at 193 LB (The LHW limit is 205 LB) so that makes Jan’s Ground advantage even more of an issue for Izzy as Jan is incredibly strong. Israel “The Last Stylebender” Adesanya is looking to become the 5th ever to hold 2 belts simultaneously as he goes into the toughest battle of his career. Izzy holds a 20-0 Perfect Professional record with a 9-0 UFC record. The striking is easily his best advantage going into the fight as he is a proven Kickboxer and an absolute menace with the increasingly popular and ridiculous Calf Kick. If I had to guess what weapon he uses the most it’s definitely that as in his previous fight he used it almost non stop on Paulo Costa. To me this is an unpredictable fight, very evenly matched with very different advantages on both sides of the table which makes it perfectly understandable why it’s being so hyped up.

With one of the most stacked cards in UFC history this Saturday night is destined to be absolutely legendary. Its good fight after good fight with pretty much none of them being incredibly one sided. It’s going to be awesome!