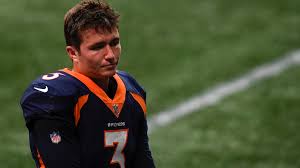 Denver Broncos quarterback Drew Lock was taken in the second round of the 2019 draft and has shown several flashes of a potential franchise QB.

Lock has plenty of reasons for his struggles and successes so far in his career.

Denver’s offensive line has been hit hard by injuries and COVID-19 this season and best weapon, Courtland Sutton, is out for the year with an ACL injury.

Even with a mediocre offensive line, Denver expects Lock be able to post better numbers than he has through the first 12 games with the Broncos.

Despite being surrounded by young talent, Lock has only completed 58.63 percent of his passes with 14 passing touchdowns and 13 interceptions in his 12 career games with the Broncos.

Lock does have several weapons including the Pro Bowl running back duo of Phillip Lindsay and Melvin Gordon for a consistent and fresh rotation.

The Broncos offense has additional targets in tight end Noah Fant, rookie receivers Jerry Jeudy and KJ Hamler, plus an up and coming receiver in Tim Patrick.

Lock who is only in his second NFL season is averaging merely over one touchdown pass and just over one interception per contest.

Good quarterbacks make the players around them better. Great quarterbacks overcome poor offense line play by getting the ball out quicker.

Most mediocre QBs are posting positive numbers in today’s pass-happy league, especially when they have young talented RBs, WRs and TEs to work with.

Lock is not necessarily the sole reason behind Denver’s negative record, but he needs to prove he can be part of the solution.

Lock has also struggled to stay healthy as he has missed a total of 20 games.

The NFL draft will come fast, and if the Broncos QB continues his struggles or cannot stay healthy, he could ultimately be replaced by incoming QBs.

An incoming QB-friendly draft could push the Denver front office to bring in a guy to either compete with Lock, or entirely take the starting job.