Trials and Tribulations: The Importance of LeBron’s 4th Ring 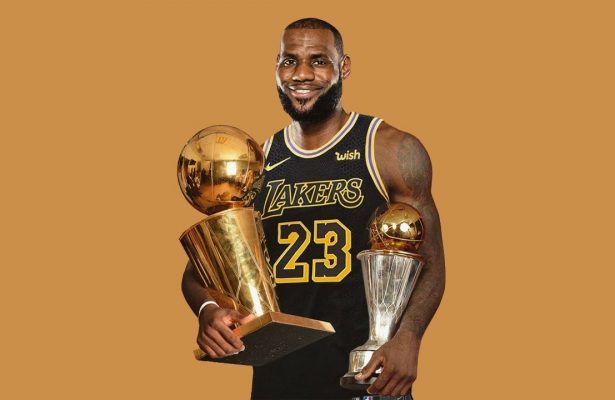 LeBron James. The name that ushers both unrelenting praise and critique when spoken.

The King, King James, LBJ, the Chosen One. All these terms are synonymous for a kid who has had the pressure of being a legend, all while still being a teenager.

The cameras followed him all through high school, nonstop press covering his entire life pre-draft, and even gracing the cover of Sports Illustrated at the age of 18.

Each era in history is subjective when when defining criteria for world events and social trends, but there is a bulletproof case to be made that LeBron James, the kid raised by a single mom in the small town of Akron has faced more pressure than almost anyone in the world.

Lebron’s reign as the NBA’s best has not always ended in the promise land and he will never have the perfect career that Jordan had, but LeBron has still, in his own way, exceeded all expectations and placed himself in the conversation of the greatest ever.Even with a 4-6 finals record, his performance against Dallas in the finals, his role in what some call “politicizing” the NBA, he still has surmounted his name to be in the discussion.

With all those perceived lows and still being able to contend for the elusive title of GOAT, it raises the question, how good are his highs?

The King has 4 titles, 4 finals MVP’s, 4 regular season MVP’s, 16 All-NBA honors, 13 All-NBA first team selections, 6 All-Defensive team honors, a scoring title, and an assist title to his name while also being on pace to finish his career as tbe highest scoring player of all time.

These accomplishments are just scratching the surface of his resume. The countless playoff game winners and clutch shots, the sheer basketball IQ, the outstanding finals performances, being the only non point guard to be in the top 10 for all-time assists.

There is no denying Jordan had a greater career. Jordan was 6-0 in the finals and won more MVP’s than Lebron but when looking at the context of the eras through the rules, competition faced, skill of the league and impact on the court, there is room for debate.

If it was not such a close battle between the legends then there would be no need for the feuds on social media and on daily sports shows debating a topic that has been done to death.

That’s why LeBron’s 4th ring is as valuable as ever in cementing his case. His 3-6 finals record prior to the bubble dissuaded many fans as it was a representation of rewarding people for losing. Why should LeBron be considered the greatest if he can only win once every 3 times?

Not only did Lebron capture his 4th ring and finals MVP to go along with it, he did so in a fashion like no other in the bubble. The players were separated from their families, and all energy was focused on basketball. Some may say it is an asterisk but there is no doubt that the bubble was one of the mentally toughest title runs in NBA history.

With Anthony Davis by his side and likely to stay after tasting greatness for the first time since his NCAA days, it would not be far fetched if they shot for another title next season. Being able to win 1 more chip will bring him 1 away from Jordan which although took more tries, it would be astoundingly impressive to make 11 appearances on the biggest stage.

Whether or not you like LeBron, there is no denying that he has impacted the game by globalizing it through his popularity. Lebron changed the game forever.