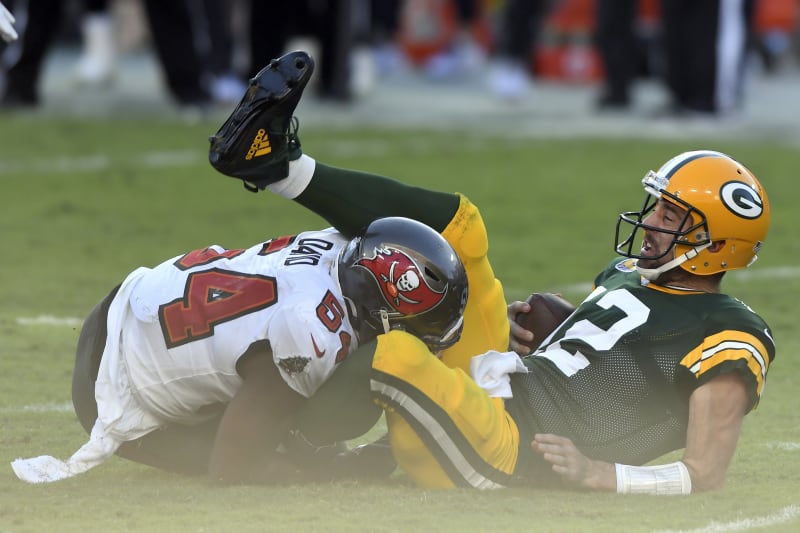 Sunday’s clash featuring the Packers and the Buccaneers was headlined by two of the games all-time greats going head-to-head; Aaron Rodgers against Tom Brady

It was expected to be an intense matchup for all 60 minutes on the field but what happened was a monstrous blowout for Tampa Bay that saw Rodgers get stumped by a stellar defensive Bucs’ squad.

How bad was Aaron?

Green Bay opened up the game strong scoring 10 points in the first quarter while holding Tampa Bay scoreless. Things were holding up in the 2nd quarter when Rodgers pass intended for Davante Adams was picked off by Buccaneers corner Jamal Dean.

Tom Brady showed glimpses of his old form with the Patriots, throwing 2 touchdowns with no interceptions to go along with a quiet 62.9% pass completion rate.

After that the life was drained from the Packers as they allowed Tampa Bay to score 28 points in the 2nd, 10 in 3rd and preventing Green Bay from scoring the rest of the game.

The Packers who were 4-0 were seen as NFC championship favourites. Aaron Rodgers himself was in neck and neck with Russell Wilson for MVP. The Packers not only have lost credibility as contenders for representing the NFC, the Bears have taken the division lead from them. Russell Wilson has a stronghold on the MVP trophy while also on pace to break Rodgers single-season passer rating record.

Green Bay is now looking to redeem themselves against an underwhelming Texans team while Tampa Bay is hoping to continue extend their hot streak from 3-1 upwards as they play a strong Raiders squads.