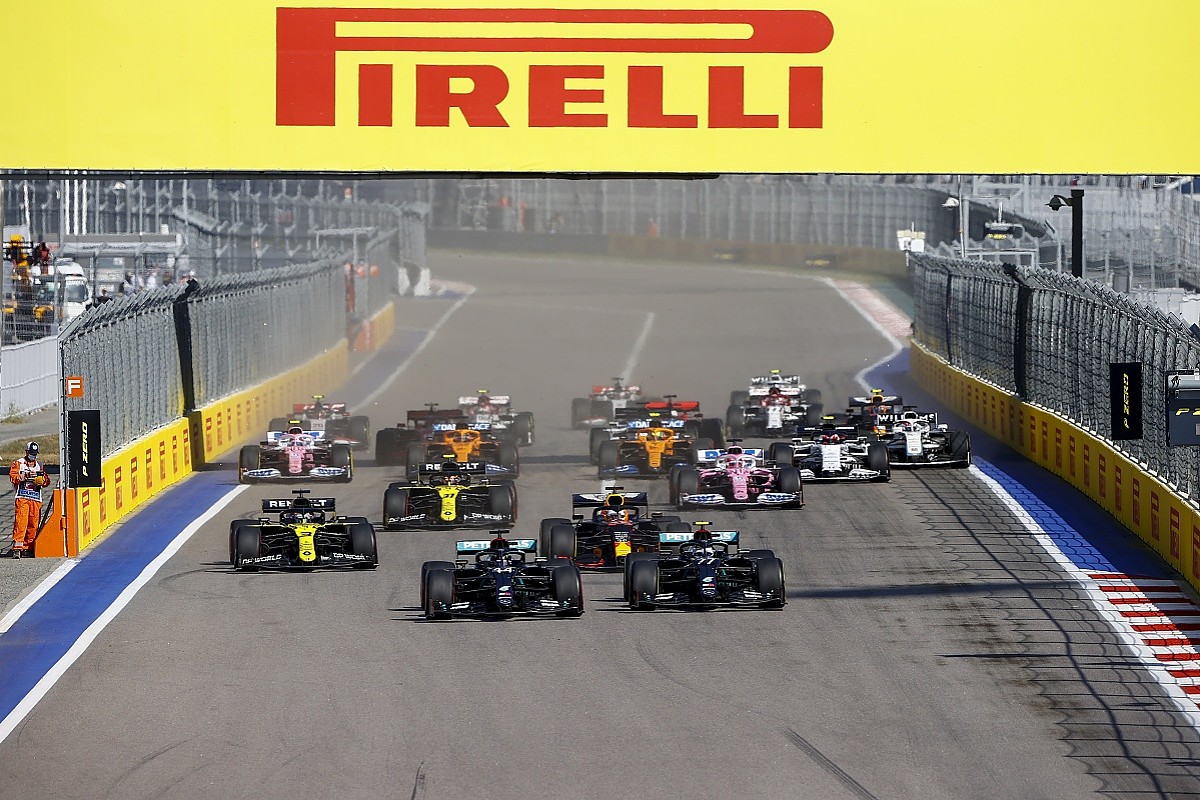 Sunday was the Russian Grand Prix. It was an interesting race with some retirements and some time penalties and fortunately no red flags on Sunday.

Before the 5 red lights went out to start the race, Lewis Hamilton was under investigation for doing two practice starts in the wrong place.

Alexander Albon received a 5 place grid penalty for changing the gearbox in his car. This forced him to start 15th.

Kimi Räikkönen equalled Rubens Barichello’s record for most race starts with 322. It is likely that Räikkönen will pass that record in Germany on October 11th.

Lap 1 of the race came with chaos and retirements. The McLaren of Carlos Sainz crashed after misjudging the space he had going around the bollards. He spun into the track and teammate Lando Norris had to slow down and dropped to last on the grid to ensure avoiding his teammate.

A moment to forget for Carlos Sainz – as an error of judgement ends his race just seconds into the opening lap 💥#RussianGP 🇷🇺 #F1 pic.twitter.com/OxZcdsvoWC

A little further down the track came another incident when Charles Leclerc clipped the rear tyre of Lance Stroll and sent him into the wall, ending his race. The safety car was then called out.

The safety car was out until lap 6 and the Hamilton was off, followed closely by Bottas.

Soon after that, the penalties for Hamilton came in. He received two 5 second penalties, one for each practice start in the wrong place. He was also given two points on his super license taking his total up to 10, if he gets to 12 before the Turkish Grand Prix he gets an automatic race ban.

At the back of the grid, Lando Norris and Alex Albon were duelling for 17th position. Soon after, they catch up to George Russell and it was a battle for 16th to 18th.

On lap 17, Hamilton pitted and served his 10 second penalty before getting his tyres changed and coming back out. He came out in 11th position.

Valtteri Bottas took the lead from Hamilton and set a new fastest lap, increasing the gap between himself and Max Verstappen.

Bottas pitted on lap 27 and came out still in the lead, just in front of Verstappen.

Daniel Ricciardo overtook his teammate Esteban Ocon but locked up and went off track briefly before coming back on. The stewards decided to investigate him for not following the race directors instructions. On lap 28 a 5 second penalty came in for Ricciardo.

On lap 43 the virtual safety car was called out and AlphaTauri called Pierre Gasly into the pits just as the VSC ended.

Lando Norris and Alex Albon were able to climb back up into positions 8 and 9 respectively.

On lap 48, Albon finally overtook Norris and Norris pitted and fell down the grid.

Mercedes driver, Valtteri Bottas was the first to cross the line on lap 53, giving him another Formula 1 win, his 2nd this season. Max Verstappen came in 2nd followed by Lewis Hamilton.

Verstappen was voted driver of the day and Bottas was able to slightly close the gap in the championship standings between himself and Hamilton.

A few hours after the race was over, the stewards looked at what happened with Lewis Hamilton and his race starts in the wrong place and it turned out that the team told him to practice there. Due to this, they decided it was not Hamilton’s fault. They rescinded the 2 points on his license, taking his total back down to 8.