The Atlanta Braves Score 29 Runs Against the Miami Marlins Falling 1 Short of the MLB record. 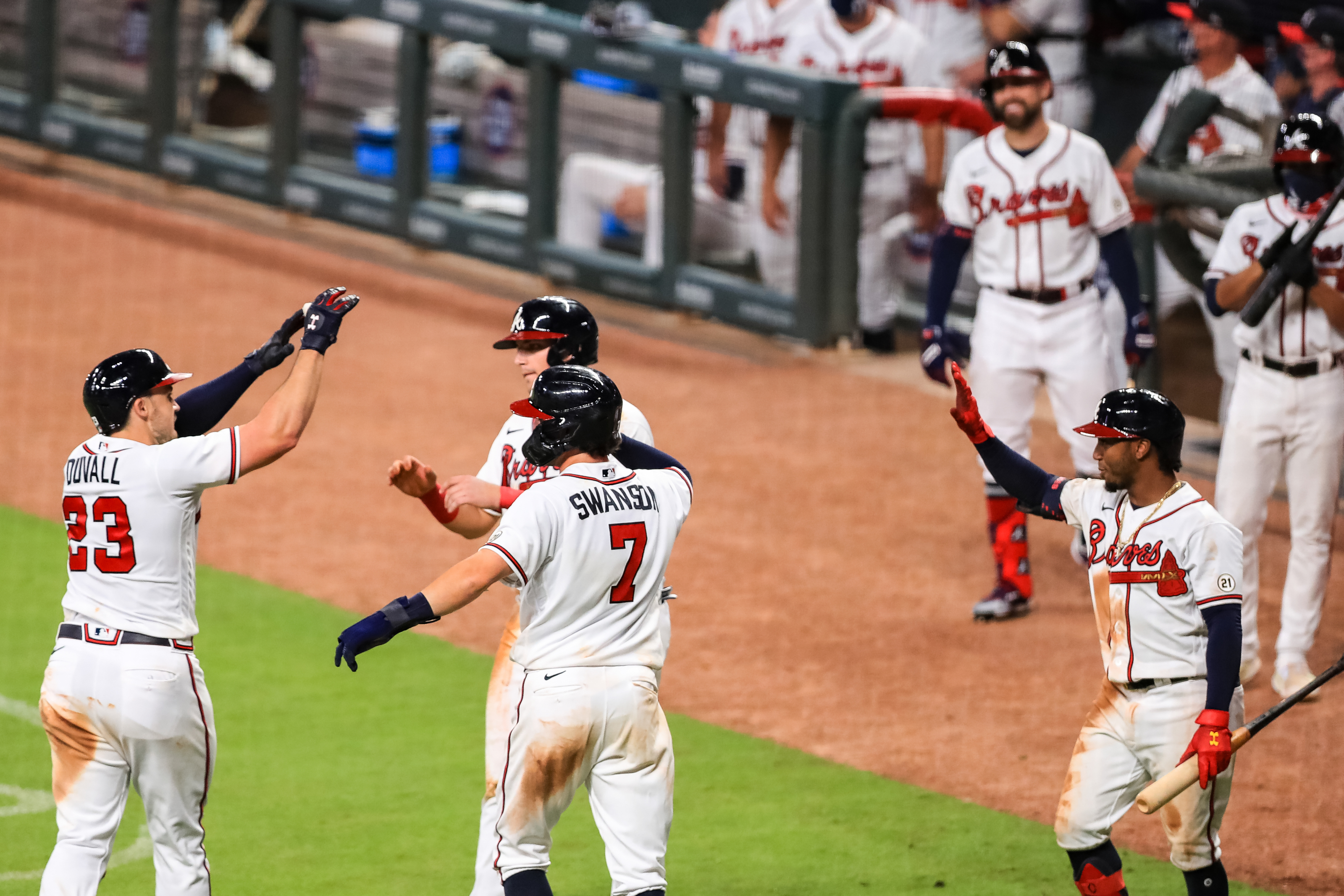 The Braves looked to avoid being swept by the Miami Marlins for the first time since 2015. Little did either team know, the Braves would get their victory, but not in the way anyone imagined. The game was set to be a pitching matchup between Miami’s ,Pablo Lopez, and Atlanta’s, Tommy Milone. The game would go scoreless in the 1st inning, and the second is when things really picked up. The Marlins kicked it off in the top of the 2nd, with C , Jorge Alfaro, hitting an RBI single to score 1B, Garrett Cooper, and then 2B, Jazz Chisolm, tripled to score Alfaro. The Braves came up to bat down 2, ready to do what they could to break the deficit.

SS Dansby Swanson led off with a single, followed by 3B, Austin Riley, and LF, Adam Duvall, who walked back-to-back to load the bases. 2B Ozzie, Albies, (in his first game back from injury) grounded out to first base, which scored Swanson getting the Braves on the board and moving up Duvall and Riley to 2nd and 3rd respectively. CF, Ender Inciarte, hit a sacrifice fly to score Riley and move Duvall to third base, tying the game at 2. RF Ronald Acuña Jr. walked, then 1B, Freddie Freeman, singled, scoring Duvall and moving Acuña from 1st to 3rd base making the score 3-2. DH/OF, Marcel Ozuna, singled scoring Acuña and moving Freeman to 3rd base to increase the score to 4-2, and then C, Travis D’arnaud, hit a 3-run home run to clear the bases and increase the score to 7-2. After the homer, the Marlins changed pitchers swapping Pablo Lopez for Jordan Yamamoto. The Braves had now batted around the order and Swanson was back up to bat. Swanson singled, stole second base, then scored on a single by Riley (8-2). The inning was capped off when Duvall and Albies hit back-to-back home runs (11-2). Inciarte finally ended the inning with a ground out.

Heading into the third inning, the Marlins weren’t just going to back down. The Braves had nearly blew a 10 run inning earlier in the year, so the Marlins knew they still had a shot. OF, Lewis Brinson, hit a 3-run home run to close in the score to 11-5. In the bottom of the inning, the Braves quickly answered with a 2-run home run from Freddie Freeman to increase the score to 13-5 (it was also Freeman’s 1500th career hit). In the top of the 4th inning, Marlins’ 2B, Jazz Chisolm, hit his first MLB home run to make it 13-6. The Braves would change pitchers and Grant Dayton took the mound. Dayton gave up an RBI double to 1B/DH, Jesus Aguilar, and a sacrifice fly to 3B, Brian Anderson. The score was now 13-8. With the Marlins scoring 3 in the top of the 4th, the Braves scored 3 in the bottom of the 4th. Adam Duvall walked, Ozzie Albies singled, and Ronald Acuña Jr. also walked to load the bases for Freddie Freeman. Freeman hit a bases-clearing double to score all 3 runners. The Marlins would not score in the top of the 5th. The game was now halfway done, and the score was 16-8 Atlanta.

In the bottom of the fifth inning, Dansby Swanson chalked up another single, Austin Riley reached on an error by Marlins 3B, Brian Anderson, and then Adam Duvall hit his second home run, this time a 3-run home run. The score was now upped to 19-8. After an Ozzie Albies single, Alex Vesia was the new pitcher for the Marlins. Ender Inciarte singled and Ronald Acuña Jr. hit a monster 3-run home run to dead center field to increase the score to 22-8.

Swanson and Riley led off the bottom of the 6th with back-to-back walks, followed by Duvall, and Albies with back-to-back strikeouts, and then Inciarte reached first on a single to load the bases. The Marlins changed pitchers to bring Josh Smith to the mound to face Acuña. Acuña responded accordingly by hitting another bases-clearing double to extend the lead to 25-8.

After a much needed 7th inning stretch, the Braves were back at it again, but not after the Marlins scored their 9th run on an RBI single by C, (now in right field) Jorge Alfaro, to score 1B/DH, Jesus Aguilar. The Braves would get 3 consecutive runners on base with Travis D’arnaud getting a single, Dansby Swanson being hit by a pitch, and Austin Riley also hitting a single. Adam Duvall, who already had 2 home runs, then hit a monster grand slam making the score a whopping 29-9. The Braves would not score in the bottom of the eighth, and with the lead at home, there was no need for a bottom of the ninth. The Marlins tried making a comeback with back-to-back singles to start the ninth inning, but they were unable to score as Bryse Wilson pitched the final 4 innings for the Braves and closed out the game to set a final score of 29-9 and somehow recording a save.

The Brave 29 runs set a new NL record for most runs in a single game and is one short of the all-time MLB record for runs in a game which was set when the Texas Rangers scored 30 runs against the Baltimore Orioles in 2007. season. Adam Duvall’s 3 home runs mark the second time this season that Duvall has accomplished the feat, with his first coming only a week earlier in Boston against the Red Sox. He is the second player in MLB history to hit both of his 3 Home Run games with 10 days of each other with the last time it happened being Johnny Mize of the St. Louis Cardinals in 1938. Duvall is also the first player to ever hit a 2-run, 3-run, and Grand Slam home run in that order in the same game, and was a solo home run short of hitting the first-ever Home Run cycle in MLB history. (Duvall had the chance to hit a solo home run in the 4th inning.) The only time a Home Run cycle has ever been hit was when Tyrone Horne did it for the AA minor league team Arkansas Travelers in 1998 and again in 2019 by sophomore Danielle Gibson in an NCAA Softball game for Arkansas.