Ryan Shazier Retires – His Life Story and What the Future Holds 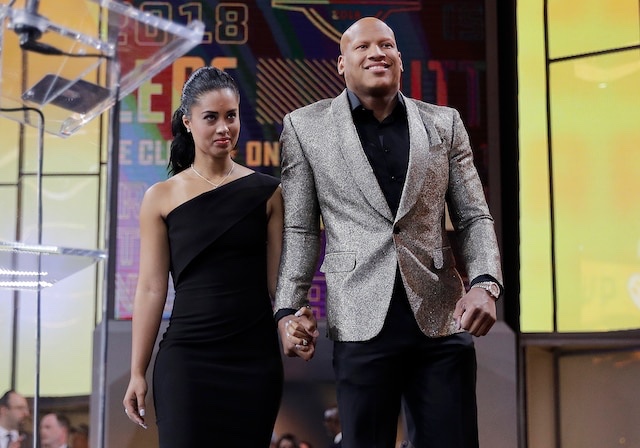 Every football player’s worst nightmare is hitting your head in the wrong spot. It can happen for a variety of reasons, some due to form, some just pure unluckiness. For Ryan Shazier, that nightmare came true on Monday December 4th, 2017. The play was a routine tackle for a linebacker, short drag over the middle 95% of times the linebacker makes a tackle for a short gain and goes onto the next play. For Shazier, however, he was the 5%. He hit his head just so causing a spinal contusion changing his career and life forever. We aren’t here today to talk about the bad, on the day of his retirement we’re gonna talk about his past and what’s in store down the line for the former Buckeye and Steeler.

Ryan Shazier was born in Lauderdale Lakes, Florida to mother Shawn and father, Pastor Vernon Shazier. Vernon instilled faith into his son at a young age and his faith is what kept him strong as a kid. Ryan was diagnosed with Alopecia at age 5, and often dealt with bullying as Alopecia takes away any hair growth in your body. Shazier was quoted in an interview with HisHairclinic.com: “It bothered me more when I was younger, being the only bald kid in kindergarten.” Having this kind of disease does a lot to the morale of anybody, let alone a little kid who couldn’t understand why this happened to him. According to an interview done with Northeast Ohio Media group, his father preached to him “Always act like a champion.”

Shazier took that advice to heart, and with it he became one of the best football players in Plantation High School history. Going back to his high school days, Shazier was described as having great hip form as a tackler and was overall just very explosive, this is what you typically hear about linebackers who are going to make noise at the next level. Shazier ended up being ranked the 106th best player in the nation, 7th best linebacker, and 22nd best player in the state of Florida. Those were major accomplishments for the kid who was called Cueball and Patch as a kid, an accomplishment that wouldn’t have been possible without the motivation of his father.

Ryan eventually committed to the University of Florida under coach Urban Meyer but, after Meyer resigned he quickly committed to Ohio State where coincidentally enough, Meyer was hired a few months later. Shazier made impacts at Ohio State as a true freshman recording 57 tackles, 5 tackles for loss, 3 sacks and 2 forced fumbles, recording 15 tackles alone in his first start against Penn State. Ryan built upon his freshman year success, with an even better sophomore season leading the Big Ten with 17 tackles for loss and second in the nation with 115 tackles. Junior season was his best yet, this time leading the Big Ten in tackles with 143 and recording 20 tackles in a single game vs Indiana, showing truly how dominating he was. Shazier forgoed his senior season and finished with 14.5 total sacks, 315 tackles, and 9 forced fumbles, some madden esque college numbers.

The Pittsburgh Steelers rewarded Shazier for his hard work by selecting him 15th overall in the 2014 draft, and signed him to a 4 year deal with 9 million guaranteed. Shazier didn’t put up as gaudy numbers as he did in college through his first season, but put up a respectable 34 tackles (24 solo) and a pass deflection in five starts and eight total games. His second year was where he became elite, making big plays throughout the season especially in the playoffs forcing a game clinching fumble in the wildcard round vs Cincinnati. He finished his second season with 87 tackles 3 ½ sacks and an interception in 12 games. Shaziers 3rd season was just as good as the last, collecting a career high for tackles in a game with 12, and making play after play especially in the playoffs where he collected 6 tackles and an interception in a wildcard round win vs Miami. Shazier finished his final “full” season with 87 tackles, 9 Pass breakups, 3 ½ sacks, and 3 interceptions over 13 games. Shazier began what would be his last season off to quite a good start, collecting 11 tackles and 2 forced fumbles in an early season matchup with the Browns. However this good start was put to an end, as he suffered a devastating spinal contusion in a mid season matchup with the Bengals. His plan was never to retire, as still to this day he is pushing himself to become stronger, but his injury is far too risky to ever play football again. His playing career was officially ended on March 17th, 2020 as he was placed on the reserve/retired list.

On September 9th, 2020 Shazier announced his retirement from the NFL, something we all expected, but still so devastating to see happen. Shaizer never once let himself get taken down by anything in life, as a kid it was alopecia and bullying that came with it that he used his faith to fight through. Shaziers battle back from his spinal injury, had that same faith mixed with support from about everybody you can imagine. Shaizer has grinded extremely hard and is still working everyday to get his strength back to 100%. Ryan knows he will never play football again, but with a wife and 2 sons, he has a support system that will stick with him no matter what. Coaching isn’t out of the cards either, as he has been very active in a volunteer coaching role with the Steelers. Whatever path Ryan chooses to go on, it should be pretty clear that he has the strength and fortitude to accomplish whatever he sets his mind to.