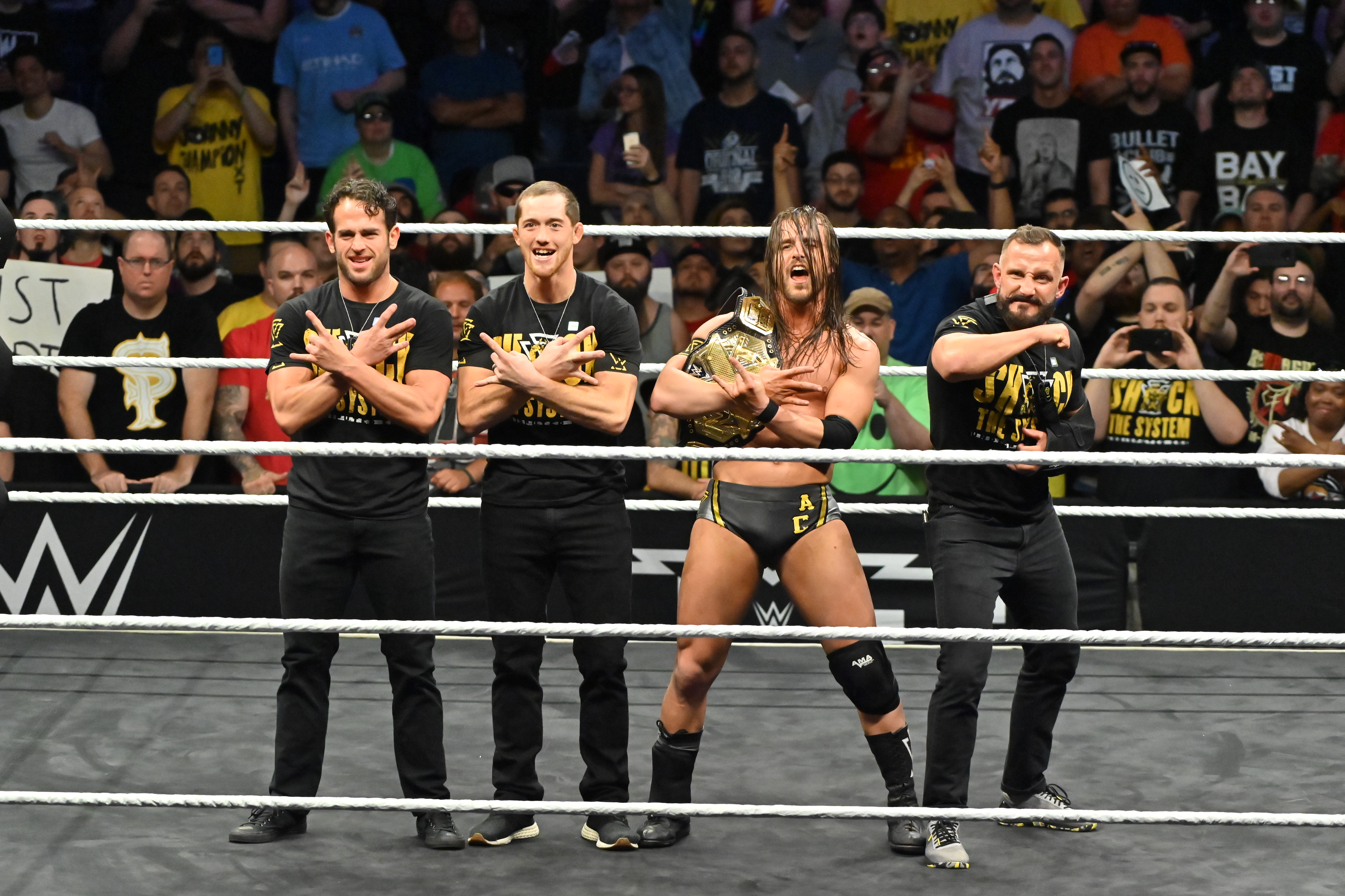 The match didn’t even begin before the action started. Breezango attacked the NXT tag team champions to take the upperhand in the beginning of the matchup. The match goes back and forth with both teams taking blows from one another. Eventually, Fabian Aichner, of Imperium, hit Fandango with a butterfly suplex. He went for the cover but Fandango kicked out at two. Tyler Breeze then gets into the action and both teams, once again go back and forth, exchanging blows. Later on, Breeze finds an opening and superkicks both members of Imperium. He tags in Fandango, and he hits a diving leg drop from the top rope. He hits both of members of Imperium, and goes for the cover over Aichner. One, two, three, Fandango pins Aichner for the win. This is Breezango’s first championship win ever in the WWE. Breezango wins via. pinfall to become the new NXT Tag Team Champions – Grade B

This match was short and quick. Ciampa destroys Atlas in the corner with a bunch of stomps to the head. Ciampa then hits the Widow’s Bell DDT for the win. After the match, Ciampa turns heal and takes out Atlas, throwing him everywhere outside of the ring. Tommaso Ciampa wins via. pinfall – Grade C+

The two women go at it exchanging shots to each other. Yim finds a way to hit a hurricanrana. Both women then attempt to roll one another, but they both kick out multiple times. Yim tries to put Blackheart away but is not successful. Blackheart hits a slingblade, a discus forearm, and a side suplex. She goes for the cover, but Yim kicks out. Yim then lands a butterfly suplex. She tries to secure the win, but Blackheart has other ideas. She connects with an elbow drop, and then a senton from the top rope. Blackheart goes for the cover and finally secures the win. Shotzi Blackheart wins via. pinfall – C+

William Regal, the general manager of NXT, announces that a 4-Way 60 minute Iron Man Match will take place next week on NXT. This match will feature arguably the best NXT wrestlers of all time. It will consist of Johnny Gargano, Tommaso Ciampa, Adam Cole, and Finn Balor.

Both wrestlers go at each other throughout the championship match. However, then two men end up outside of the ring, and Escobar throws Scott around. The two men then end up back in the ring. The match then takes a turn. Breezango takes out Mendoza and Wilde, who are at ringside. Scott uses the distraction to land a running kick and the German suplex. He goes for the pin, but the champ kicks out. Escobar then puts on a luchador mask and headbutts Scott. Scott is out cold, and Escobar pins him for the win. Santos Escobar wins via. pinfall to retain the NXT Cruiserweight Championship – Grade B

Drake Maverick starts off fast landing a bunch of strikes. O’Reilly ends up outside of the ring and Maverick heads to the top rope. He takes out both Roderick Strong and Bobby Fish, two of the other three members of the Undisputed Era. O’Reilly and Maverick are back in the ring, but the Undisputed Era member is in control. He hits a couple of palm strikes and a kick, but Maverick counters with a snapmare. Maverick is now on a role, he hits a bulldog and lands a senton. O’Reilly tries to stop the momentum of Maverick, but is hit with an enziguri. However, O’Reilly is able to lock in the knee bar and Maverick is forced to tap out. Kyle O’Reilly wins via. submission – Grade C

Kai and Ripley go at. Ripley throws around Kai, but Gonzalez tags in. Ripley and Gonzalez push each other around, until Shirai tags herself in. Shirai goes 1 on 1 with Gonzalez. Despite the height advantage, Shirai stays in it and eventually squares off with Kai. Shirai hits a drop kick and goes for the cover, but Kai kicks out. Both women go at it for a while, until Gonzalez ends up back in the mix. She goes for the cover but the champ gets her shoulders up. Shirai finds and opening and tags in Ripley, but the referee didn’t see. Shirai now has to stay in the match. Kai and Gonzalez begin to tee off on the champion until she finds a way to, finally, tag in Ripley. However, Gonzalez slams Ripley into the mat and pins her for the win. Dakota Kai and Raquel Gonzalez win via. pinfall – Grade B-

The next time NXT will take place will be next Tuesday, well as William Regal called it “Super Tuesday.” It will be different since NXT normally airs on Wednesdays. Look out for an amazing show.