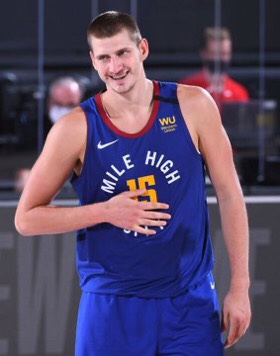 This may have been the best game of the NBA restart. There have been a ton of close games in the bubble, but none quite like this one.

The Denver Nuggets managed to overcome an 18-point deficit in regulation to battle it out with the Jazz in two overtimes.

Nikola Jokic was absolutely fantastic in this game. He scored 30 points on 11-21 shooting while pulling in 11 rebounds, dishing out 7 assists, and grabbing 3 steals. He was an all-out beast on both ends of the court and nailed the crucial lay-up to tie the game at the end of regulation.

Although, the end of regulation was a bit hectic. Whoever was in charge of the clock deserves to be fired as that person not only forgot to start the clock when Jokic had the ball with 3.4 seconds left, but then started the clock too early on the next play!

Despite that, the game was incredible and the Nuggets managed to prevail.

Jamal Murray also played a huge part in his first game back. He scored 23 points on 10-25 shooting and also pulled in 12 rebounds and dished out 8 assists.

As for the Jazz, it was a valiant effort. Donovan Mitchell was the star of the show for the team as he scored 35 points, dished out 8 assists, and pulled in 6 rebounds. He was unbelievably clutch at the end of regulation, scoring 5 HUGE points to force overtime and then also shouldered the load to force double-overtime.

It was an absolutely fantastic game that will hopefully be seen again in the playoffs. The Jazz fell down to the #6 seed after this game while the Nuggets hold their #3 seed, meaning we could be seeing a rematch sooner rather than later.

The Nuggets next play the Lakers a 6:00 on Monday

The Jazz next play the Mavericks at 3:00 on Monday