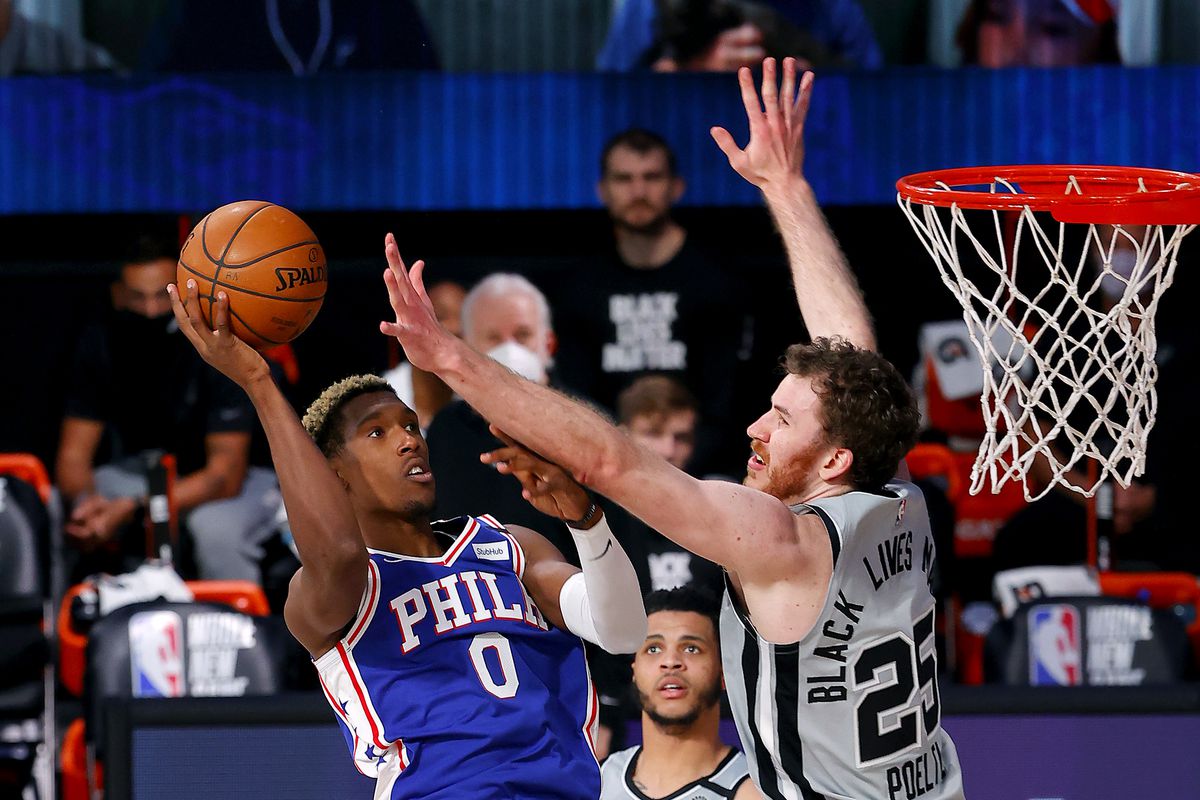 In what became a thrilling game near the end, the Sixers were able to hold on and defeat the Spurs 132-130. The Spurs, who have been very impressive since the restart, were able to pitch a big of a comeback, as they were behind most of the game. Going into the 4th quarter down 14, the Spurs were able ti tie the game late, and even take a 2 point lead, before Shake Milton hit what would eventually be the game winning 3.

There was one concern going into this game for San Antonio, and it was their lack of frontcourt depth. Philly with Embiid, Simmons, Harris and Horford were able to outmatch the Spurs inside, who only had 3 true bigs play, one being Tyler Zeller who played 4 minutes. Poeltl is a much improved player this season, but was in foul trouble all night, making it even more difficult to deal with the size of the 76ers.

Philadelphia once again played Simmons at the 4, but he played limited minutes down the stretch. Instead, Horford was in to close the game out on both offense and defense, and they were able to create a good shot for Milton, before stopping Derozan on the other end to seal the W. It will be very interesting to see how this Philly team chooses to finish games as we creep closer to the start of the playoffs.

The Spurs once again thrived by playing their young guys, and by playing small ball. Demar, starting at power forward, had another big game with 30, and Derrick White dropped 20 for the Spurs. Rudy Gay, another guy who was improved in the bubble, had 24 off the bench. The 76ers were led by Embiid, who had 27 and 9 against the undermanned frontcourt, and Harris chipped in 25, something they will need from him if Simmons is not contributing as much late in the game.

The Refs have had their fair share of criticism so far in the NBA restart, and there were a few calls that Spurs fans will be upset about. The first being Embiid’s putback to end the 3rd quarter, which should have been a shot clock violation. There was also a block/charge call involving him and Poeltl at the end of the game, but it did seem like Poeltl was still moving slightly when the contact occured.

The Spurs lose a tough one, as the Pelicans leapfrog them for the 9th seed in the West. They have looked good in all 3 games in Orlando though, and can definitely respond. The 76ers get their first win in the bubble, and look to build on it and climb a spot or 2 in the standings before the playoffs.