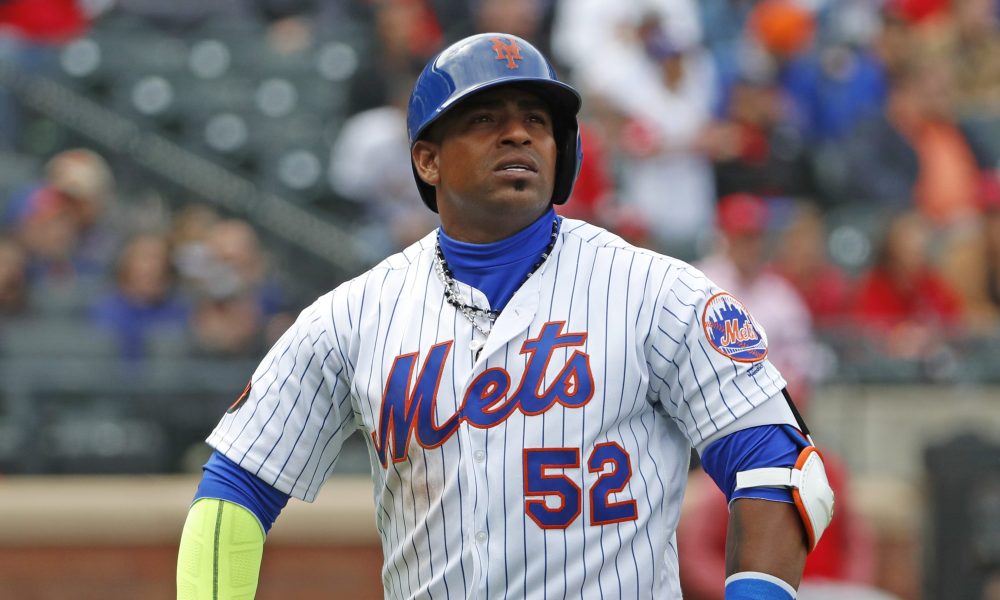 On August 2nd, New York Mets slugger Yoenis Cespedes, chose to opt of the 2020 MLB Season. 2020 was Cespedes’ final season in his 4 year deal that he signed with the Mets prior to the 2017 season, bringing an end to a contract full of injuries and pain for the 2x All Star.

Cespedes previously was a 2x Home Run Derby Champion and All Star (2013-2014) for the Oakland Athletics. He was traded by the A’s to the Boston Red Sox at the 2014 trade deadline. The Red Sox then flipped Cespedes to the Detroit Tigers in the 2014-2015 offseason and was then sent to the Mets during the 2015 trade deadline. Cespedes helped carry the Mets to capture the 2015 NL East Division, and all the way to the 2015 World Series. His most memorable moment being his iconic 3-run home run in game 3 of the NLDS vs the Dodgers, all capped off with an epic bat flip.

After the Mets lost the 2015 World Series in 5 games to the Royals, Cespedes resigned with the Mets for 3 years, 75 Million dollars for 2016-2018. Cespedes injured his quad in the summer of 2016 and was removed from the All-Star team that year because of his injury. Cespedes finished the year with a .280 Batting Average, 31 Home Runs, 86 RBIs, and an .886 OPS. He finished 8th in the MVP Voting and won the Silver Slugger award. The Mets would make it to and host the NL Wild Card game that year and would lose 3-0 after a ninth inning home run by Connor Gillespie.

After the Mets were eliminated, Cespedes opted out of his contract and then resigned with the Mets for 4 years, 110 Million Dollars, with a full no trade clause. Cespedes was going to be a Met until 2020. The signing of this contract was the beginning of a long 4 years for Cespedes and the Mets. Cespedes played as advertised to start the year, hitting 3 home runs vs the Phillies on April 11th. Unfortunately, Cespedes pulled his left hamstring on April 27th in a game vs the Atlanta Braves. He would be put on the 10 Day Injured List (Disabled List at the time) and would return later that year.

Unfortunately for Cespedes, his return would not last as long as he hoped. On August 25th against the Washington Nationals, Cespedes pulled his other hamstring and would miss the rest of the year. He finished the 2017 season with .292 Batting Average, 19 Home Runs, 42 RBIS, and .892 OPS. Heading into 2018, Cespedes was very optimistic about the Mets that year heading into Spring Training, and the Mets started the season 11-1. His biggest moment that year came when he hit a grand slam vs the Nationals on April 18th to cap a nine run inning.

Once again unfortunately, injury struck Cespedes. This time, he needed surgery on both of his heels and would be out for 8-10 months. The Mets failed to make the playoffs and finished the season 77-85 in 4th place in the division.

The hope for the Mets and Cespdes was that he would be back midway through the 2019 season. As the 2019 season went on, the Mets were in the hunt for a wild card spot, and even possibly the division. As the Atlanta Braves took a long leap into first place, the hope for the Mets was that they could take a wild card spot instead. Unfortunately, the Mets received some more bad news. On May 20th it was announced that Cespedes had fallen on his ranch and fractured his ankle, thus causing him to miss the entirety of the 2019 season. The Mets would finish 2019 with a record of 85-77 and 4 games back of the Milwaukee Brewers for that spot. To add insult to injury (no pun intended), the Mets’ division rival Washington Nationals held one of the wild card spots the Mets were desperately fighting for and would go on to win the World Series that year.

After a somewhat successful year in 2019, the Mets were hoping to be back and better with Cespdes back after missing all of 2019. However, MLB operations had to be shut down due to the Coronavirus Pandemic, suspending all forms of play. This ended up being a blessing in disguise for the Mets as it gave more time for Cespedes to fully recover from his injury. MLB Summer Camp kicked off in early July and the Mets were able to see Yoenis Cespedes back and fully healthy. Cespedes was back in the lineup as the Mets’ opening day Designated Hitter, as the DH would now be universal as a rule for the shortened 60 game season. Opening day was a pitcher’s duel between the Mets’ back-to-back Cy Young award winner Jacob deGrom, and Atlanta Braves’ ace Mike Soroka. In the 7th inning, Cespedes stepped up to the plate. He launched an 0-1 fastball from Chris Martin deep into the left field seats in Citi Field in New York. Cespedes was back.

The Mets would go on to win that game 1-0 with Cespedes’ homer being the only run scored the entire game. The Mets would drop the next 2 to Atlanta, win the next 2 against the Red Sox in Boston, and then lose the next 2 against the Red Sox but this time back in New York. After two tough loses to the Red Sox, the Mets went down to Atlanta for a 4 game set with the Braves. The Mets held an 8-2 lead in the 5th inning and the lead was then shortened to 10-6 entering the bottom of the 8th. The Braves, led by former Met Travis D’Arnaud, made the epic comeback and defeated the Mets 11-10. The Mets then lost the next game to the Braves 7-1.

The next morning, the Mets were set to play the Braves for the third game of the 4 game set. As players were reporting to Truist Park, one player was noticeably absent, Cespedes. The team tried contacting him but all attempts to reach him had failed. His hotel room was checked but all of his stuff was gone. Fans on social media were speculating what had happened and some were fearing the worst. Cespedes had disappeared from the Mets and baseball entirely without any tracks. It wasn’t until Mets’ General Manager Brodie Van Wagenen announced later in the day that Yoenis Cespedes had opted out of the 2020 season due to Coronavirus concerns. Cespedes had straight up packed his stuff and left the team. Cespedes’ long 4 years with the Mets had come to an end.

Heading into the next offseason, Cespedes is an unrestricted free agent. Whether or not a team might pick him up, it’s important to learn from a cautionary tale like this, before making the decision.