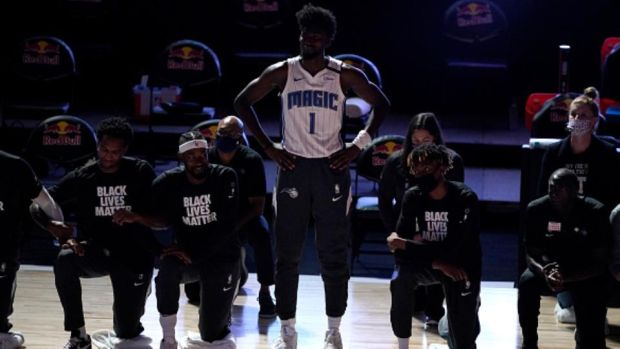 The NBA has done everything they can to appease the players who want to stand up for social justice.

Although a lot of the country and the league is very happy that the NBA is going fully into social justice, one player stood against all the changes.

Orlando Magic Small Forward Jonathan Isaac decided that he would not wear the ‘Black Lives Matter’ shirt or kneel for the National Anthem and instead chose to proudly stand.

“I do believe that Black lives matter, I just felt like it was a decision I had to make, and I didn’t feel like putting that shirt on and kneeling went hand in hand with supporting Black lives.” Isaac said after the game.

After standing for the anthem, however, he caught the attention of the other half of America.

Although kneeling was once a brave act, it is now normal and it made Isaac look brave in the eyes of many people who did not support kneeling.

Because of this, Isaac’s jerseys began being sold in the masses. Every size except for small has been sold out and it’s likely that those will be gone soon as well.

Only Lebron kept him from being the #1 in jersey sales.

Isaac’s standing for the anthem inspired a lot of people and with the Magic having their fist nationally televised game later today, expect a major bump in views as people tune in to show their support of Jonathan.