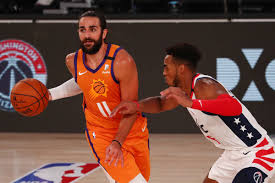 In both teams’ first game of the restart, the Suns were able to handily defeat the undermanned Wizards 125-112 in Orlando. With both teams in a battle for a potential 8th seed, the Suns took care of business in a game they really had to win. On the other hand, the Wizards struggled mightily without their top players, and need to try and rebound immediately for any chance at a playoff spot, with only 7 games left to make up the ground.

We got a glimpse of the elite offense that we saw at some points during this season from Phoenix in this game. The Suns got a strong performance from many players, led by their star duo. Booker and Ayton had 27 and 25 respectively, with the big man adding 12 rebounds as well. They both showed up, as did role players like Saric and Rubio. If the Suns continue to get good performances from these 4 specifically, they can be a very dangerous threat on the offensive side.

Despite going on a few runs in an offensive oriented game, the Wizards never really seemed to be in the game. They were able to get hot a few times due to the Suns losing their defensive intensity, but still didn’t get a foothold in the game. They struggle to create while undermanned, as Beal and Bertans value showed throughout. They were effective in the open court, but besides that were not able to punish any of Phoenix’s defensive mishaps.

A few players stepped up to keep Washington in the game, and they will need to continue to do that. Hachimura had 21 and 8 to lead the team, while Jerome Robinson, who got the start, had 20. They will need these types of performances from these guys and others to stand a chance in any of their games. They are relying on traditional bench players to carry the load, and it is tough to see them being very competitive for the next few weeks.

From a Suns outlook, this is a great start to the restart. Their best players stepped up, and they won a game they had to win. They are now just 5 games out of 8th, and only 2.5 back of the all important 9th seed. Although most fans are talking about Memphis, Portland and New Orleans battling for the 8th seed, the Suns have a great chance to surprise some people in Orlando.