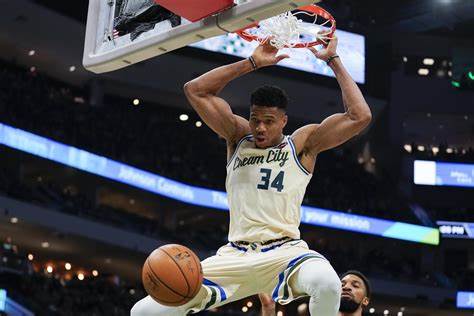 The NBA has announced that all of it’s regular season awards will be decided based on performance pre-dating the Disney World bubble. However, the season stats leaders will include the 8 regular season seeding games. This is our take on who deserves each award and why.

The NBA MVP award is as clear and obvious as it has been since the unanimous 2016 MVP Steph Curry. Giannis has scored more points, secured more rebounds, been more efficient and led his team to more wins than likely MVP runner-up Lebron James. Despite the insistence of LeBron centric members of the NBA media, the MVP is not a lifetime achievement award and should not be treated as such.

Giannis Antetokounmpo has been as dominant during the regular season as any basketball player ever has. Giannis has increased his scoring and rebounding, whilst keeping his assist numbers nearly identical, despite playing 2 minutes less per game. The Bucks have been similarly dominant throughout the season, beating opponents by a historic 11.3 points per game, which is good for 5th all time. The dominance of both Giannis and the Bucks leaves the MVP in very little doubt.

The Most improved player of the year award should be a two horse race. As amazing as it has been to see Devontae Graham flourish for the Hornets, the most improved award should not be awarded to players that make the jump in their second season in the NBA. Therefore, the Most Improved Player award is between Brandon Ingram and Bam Adebayo.

Brandon Ingram has been so good this season that the Pelicans did not lose a trade when they traded away Anthony Davies. Obviously, the other assets helped but Brandon Ingram has been nothing short of a walking bucket this season. This season Ingram increased his efficiency despite taking 4 more shots per game, as the first option (without Zion) for the New Orleans Pelicans. At times this season, BI was keeping New Orleans in the playoff picture simply by a sheer force of will. Zion will get all the adulation and applause in the Orlando bubble, just don’t forget who dragged them there.

The other true contender for this award is Bam Adebayo. Bam has become the beating heart of a very competitive, scrappy and talented Miami Heat team. In terms of statistics Bam has improved much more drastically than Ingram, his scoring nearly doubled, he gets 3 more rebounds a game and his assists have more than doubled. However, this award should not be given out to players on the virtue that they had greater opportunities than they have had in previous seasons.

All things considered, Ingram should win the Most Improved player award, it is rare that a player increases both his points scoring and his efficiency as the first option on a ‘playoff bubble’ team.

Defensive player of the year is one of the hardest awards to judge. Where does the line between defensive stats and defensive impact blur? At what point do you decide team defensive stats matter more than individual stats. This year is no different.

Giannis has been spectacular on defence, and has helped anchor the best defensive team in the NBA. He has averaged 1 blocks, 1 steal and, a league leading, 11.5 defensive rebounds per game. Antetokounmpo also excels in individual defensive matchups. When being guarded by the Greek Freak opposing players shoot 9.7% below their regular field goal percentage. This rises to a nearly incomprehensible 19.5% when within 6 feet of the rim.

The other candidate is the Los Angeles Lakers’ Anthony Davis. Anthony Davis has completely revolutionised the defence of the Lakers. The difference in performance defensively between the 18-19 Lakers and the 19-20 is near indescribable. Since the off-season acquisition of AD they have gone from the thirteenth to the third best defence in the league. In terms of individual stats, Davis has been similarly impressive. He is third in the NBA in blocks per game, fifteenth in defensive rebounds and has forced opposing players to shoot over 8% worse from the field.

Anthony Davis should win Defensive Player of The Year on the basis of transforming the Lakers defence since his arrival. The impact that he has had on the LA defence can not be overstated, without him they are middle of the pack, with him they are a championship defence.

Zion Williamson has been absolutely spectacular since his NBA debut on January the 22nd. Averaging 24/7/2 in just 30 minutes per game. After playing just 19 games he has a highlight reel like an all time great, from electric fastbreaks, to swatting the ball into the 20th row. However, as impressive as he has been over those 19 games, the problem is that it has been just 19 games, and no player has ever won Rookie of the Year playing less than 50 games.

Ja Morant has looked like a star from the moment he stepped foot into the league. The combination of Ja Morant, Jaren Jackson and a medley of young role players have made the Grizzlies have one of the fastest rebuilding processes the league has seen. Statistically Ja Morant has been near All-Star level with 17 points per game along with 4 rebounds and 7 assists. More important than his statistical impact is his impact in the win loss column. Even with the loss of Mike Conley this offseason, the Memphis Grizzlies have increased their WIN% by 9. Without him they almost certainly would not be heading to Orlando, let alone the 8 seed.

Ja is very clearly the Rookie Of The Year. Whilst it’s fairly clear that Zion is the better player, Morant has brought his team to the playoffs and only missed 6 games this season.