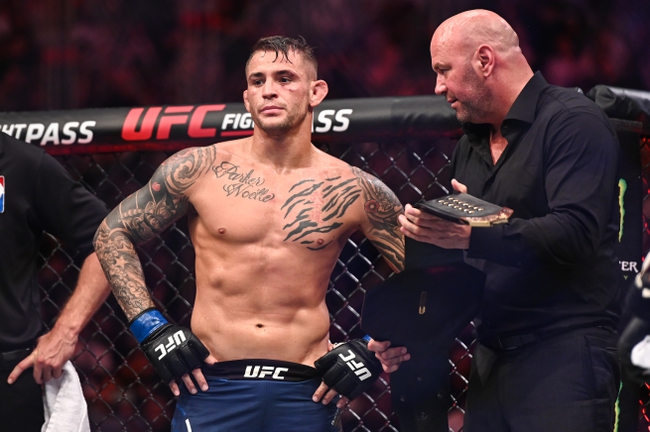 Tonight at UFC Vegas 4 at the Apex, we saw two exhilarating fights. We saw “Platinum” Mike Perry take on rising star Mickey Gall in the Co-Main event and saw a potential fight of the year candidate in a lightweight contender showdown in Main event between #3 LW Dustin “The Diamond” Poirier and #5 LW, Dan “Hangman” Hooker.

(UR) Mike Perry VS (UR) Mickey Gall

In a tune-up Co-Main event showdown, we saw a different mike Perry. In this fight, he came out with no corner-men, but rather his girlfriend. He said advice that his trainers would give him was useless and more distracting than anything.

Perry came into this fight as a big favorite with betting odds of -340. He is the far more experienced fighter, and many predicted that his striking would be too much for the young Gall to handle. Turns out, those folks were correct.

Perry humiliated Gall on the feet in the later rounds, and surprisingly landed some impressive ground and pound on Gall, an area where everyone thought Gall would have the advantage. He won the fight by a unanimous decision.

What’s Next For Platinum Mike?

Jon Anik noted in the post-fight interview that it would now make sense for Perry to get a fight with a top 15 fighter in the welterweight division.

Fighters to keep an eye on:

In the main event we saw two lightweight contenders go at it in a fight that determined who the fourth major contender is at 155 pounds aside from (Gaethje, McGregor, Ferguson)

Many are saying that the fight could contend for fight of the year. It was a slug fest on the feet, each fighter had their moments, but the diamond came up big to keep himself in title shot contention.

Poirier is a former interim champion however as we know, he failed to unify that title against lightweight champion Khabib Nurmagomedov. He pushed Khabib, but his defense off the back wasn’t enough to stop the brutal ground and pound from the Eagle. However, the Diamond said he is not done and would love another shot at the title.

Although he would love another shot, he just isn’t ready to bounce back and get that immediate rematch after such a devastating loss, especially in this stacked of a division.

Fighters to keep an eye on: