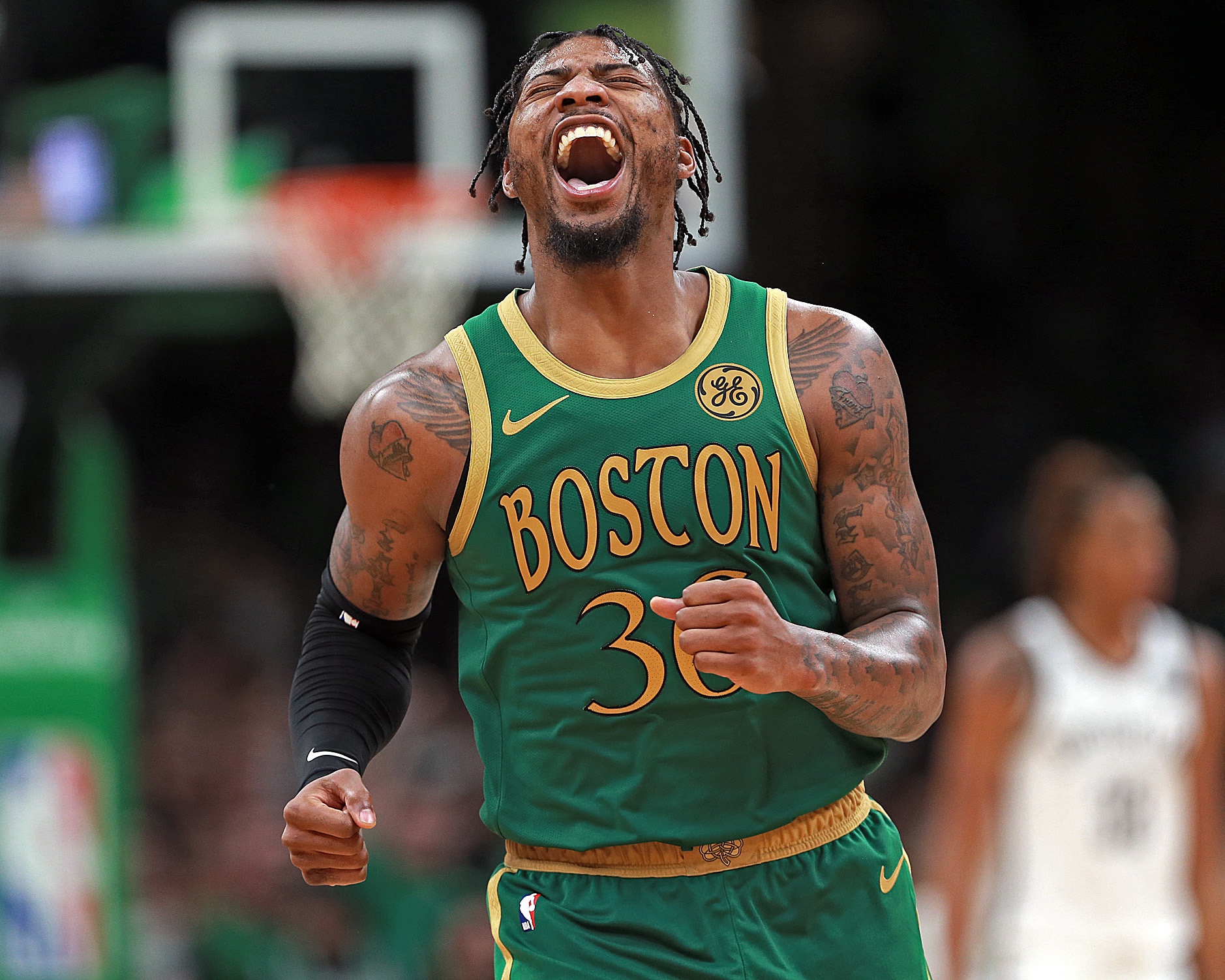 Defensively, Marcus Smart is truly one of a kind. Never in NBA history has a 6’3 player excelled in guarding big men to the same level as Smart. When defending Centers, Smart forces the opposing player to shoot a meagre 41% from 2-point range and has forced 4 turnovers in 27 minutes.

Smart relies on excellent tendency recognition to mitigate advantages that taller players have against him.  Marcus regularly identifies the moment that the opponents are at their most vulnerable, such as on the gather, to strip the ball from them or contest their shot effectively. Reaching for the ball at the lowest point, or gather, forces the offensive player to readjust their body on the shot. Smart’s perfectly timed contest makes a shot practiced a thousand times a first time experience even for an elite offensive talent.

Marcus Smart boasts an phenomenal understanding of the Celtic’s defensive strategy. Defensively Boston relies on elite perimeter defence to deny the middle, due to a lack of rim protection. The Celtic’s deploy Smart in a variety of defensive roles; whether it is chasing Redick around screens or defending Giannis on a drive, it appears that he is the best option that they have. Marcus is essential to how the Celtic’s defend off-the-ball. When shooters on the opposing team use off-ball screens Boston leaves the screener’s man near the rim to protect against the drive, relying on the player matched up with the shooter to remain with their man. This was especially prevalent in the 2017-18 playoff matchup with the 76ers. Over the course of this series Smart guarded J.J. Redick for 25 minutes and forced him into shooting 4.5% lower from behind the arc than his season average.

Smart’s most critical attribute is his will to win. Every game Celtic’s fans know he is going to leave his heart on the court. His highlight reel consists of him diving on the floor for loose balls, taking a charge or placing his body on the line to block a seven-footer at the rim. The two offensive fouls drawn against James Harden on the back end of a 26-point comeback have reached, what can only be described as, cult status among Boston fans. Harden can rest assured he is not the lone superstar that has fallen to the defensive intensity of Smart.

When defending reigning Finals MVP, Kawhi Leonard, Smart has had near unparalleled success. He has forced Leonard into shooting a massive 27% lower from the field off of 14 shots. Marcus has had completely different but just as effective success when guarding last season’s MVP, the 7-foot tall, Giannis Antetokounmpo. In nearly 8 minutes of defensive match-ups he forced four turnovers (for context, Antetokounmpo normally averages 3.7 turnovers per game). Across the board Smart regularly presents All-Stars with problems on offence; Doncic shoots just 20% against Marcus, Simmons shoots a similarly abysmal 25% and Trae Young shoots 38.5%.

Smart will never be a player that puts up flashy statlines, however, he is truly the heart and soul of a Celtics team that is going to be vying for a place in the NBA Finals for years to come. Danny Ainge has proven he’s never too loyal to a player that he won’t engage in a trade to improve his team, however Smart is about as untouchable as it gets for Boston. As an undersized guard, Smart will never get the recognition he deserves. As Dwyane Wade has said, Smart deserves Defensive Player of The Year consideration, unfortunately in this era the votes are unlikely to come his way.