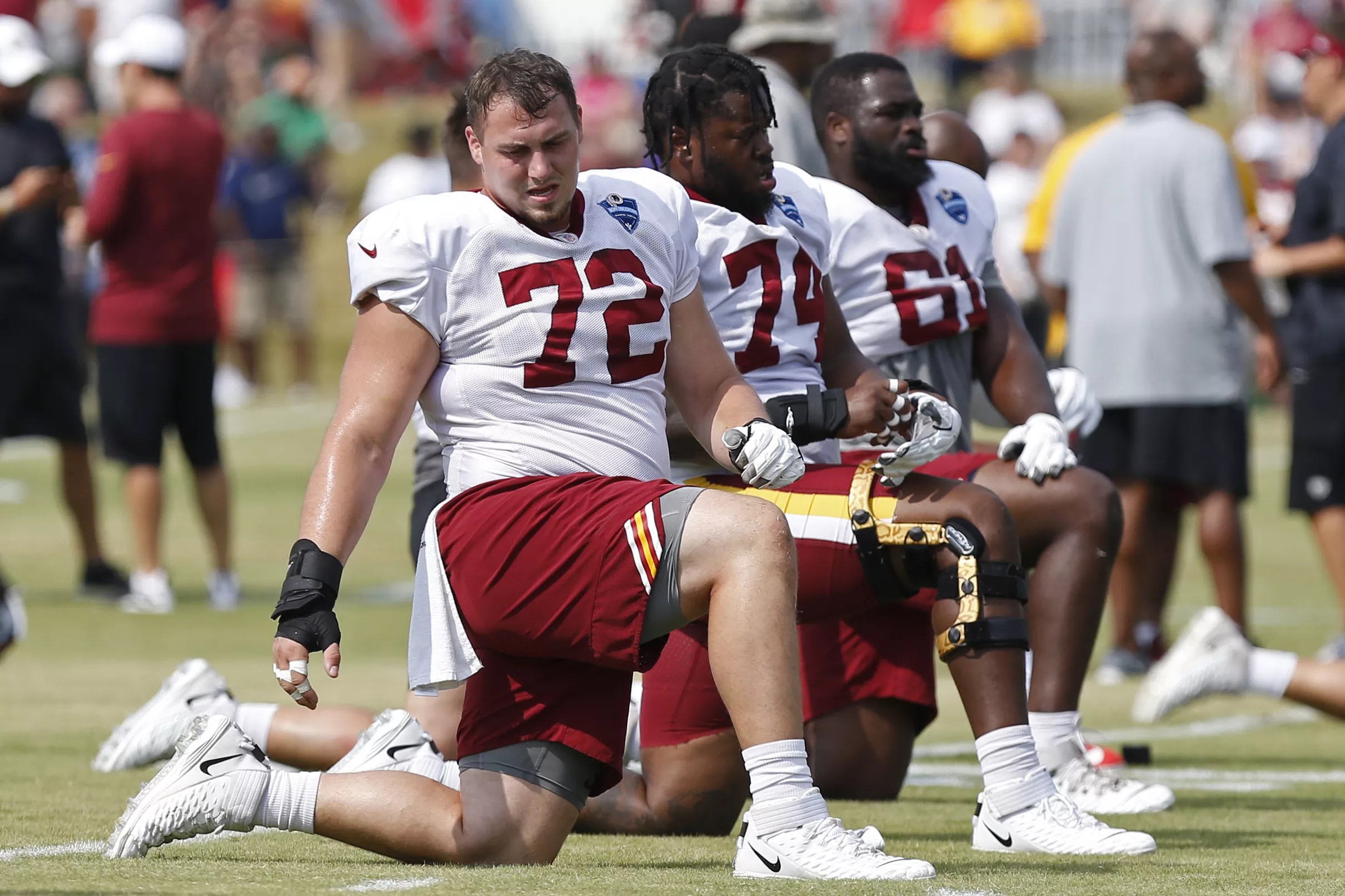 The NFC East is the only division in the league where a team can go 9-7 and still manage to take home the division. If you were to add up all the records from the four teams in the NFC East you would get a record of 24-40 the worst in the NFL. For the Eagles, they head into a season where they added help on defense along with a quarterback they took in the second round. The Cowboys will head in the season with more offensive power and an ongoing battle with their quarterback. The Giants will go through their first full season without Eli Manning on the roster since 2004 and have a running back Saquon Barkley to lead the future. The Redskins will see if Dwayne Haskins can be a full-time starter and lead the offense to the playoffs along with help on defense in second overall pick Chase Young to lead the defensive side. With that being said here is a preview for each team along with a prediction on who will win the division.

The Cowboys had three of their best players enter free agency quarterback Dak Prescott, wide receiver Amari Cooper, and cornerback Byron Jones. Knowing all three wanted big-time contracts Dallas knew they would not be able to retain all three and had to depart with one. In order to keep their offense that was ranked the best total offense by ESPN, they brought back Cooper on a 5-year $100 million and handed Prescott an exclusive franchise tag. The Cowboys added more star power to their offense as they picked wideout CeeDee Lamb with the 17th overall pick in the draft. Although there was no question the Cowboys would pick Lamb after he abruptly fell in the draft and right into owner Jerry Jones’s hands this was primarily a luxury pick for Dallas. The Cowboys could have addressed another position such as cornerback after they lost their best corner to Miami or could have picked up a pass-rusher. Dallas made up for passing on a cornerback in the first round as they went out and picked up corner Trevon Diggs in the second round a solid pickup for a corner-needy team.

The Cowboys now head into the season stronger on offense but around in an ongoing contract dispute surrounding Prescot. The latest news on Prescott receiving a new deal was he was offered a 5-year $175 million deal that would make him not only the highest-paid QB ever but also $35 million annually. Prescott declined the offer and reportedly wants north of $45 million in his final year of the contract. The Cowboys also brought in former Bengals QB starter Andy Dalton who will likely serve as the backup but you never know what if this was a precautionary step in case Prescott decides to sit out until a new deal. Dallas brought in some reinforcements for their defensive line as they went out and picked up defensive end Gerald McCoy, and defensive tackle Dontari Poe, both solid veterans. The Cowboys also brought in some young legs as they picked up defensive tackle Neville Gallimore in the third round and defensive end Bradlee Anae in the fifth round. Dallas did lose some notable players in free agency as they lost defensive end Robert Quinn (2019 sack leader), longtime tight end Jason Witten(getting up there in age), wideout Randall Cobb (solid slot receiver), and cornerback Byron Jones (best corner on the team). The Cowboys have a good chance to win the division as their only big concern is the Philadelphia Eagles.

The Eagles won the 2019 division with an outstanding 9-7 record, a thing no other division can do. The biggest surprise was how good they were despite not having a true No.1 receiver and the number of injuries the team dealt with especially on defense. The Eagles’ biggest need this off-season was getting Carson Wentz a quarterback to throw to and they did just that as they waited until the draft to strike. Philly picked speed-demon Jalen Reagor with the 21st overall pick, a questionable pick for some but they could have done worse, overall the Eagles now have themselves a target to throw deep to. Things got controversial for the Eagles in the second round as they picked up quarterback Jalen Hurts which was a major head starter since Wentz has led them to the playoffs three out of the four years he has been there. The only real reason why Philly would make this pick was due to the fact of Wentz not being able to stay healthy as he either gets hurt before the playoffs or during the playoffs. Philly took Hurts to take a young QB who is capable of being a starter if needed rather than going out and signing a veteran such as Cam Newton who will want a decent amount of money.

The Eagles had one of the biggest trades in the off-season as they went out and got 3x Pro Bowler cornerback Darius Slay from Detroit. Slay has played some of his best defense in the last three years as he’s recorded 13 interceptions, 56 pass deflections, and was a First-Team All-Pro in 2017. Philly also brought in cornerback Nickell Robey-Coleman aka the guy who didn’t get called for defensive pass interference in the Rams-Saints game. Just when we thought the Eagles were done with their wide receivers they went out and traded for wideout Marquise Goodwin who is also a notable speedster himself. The Eagles did lose some noticeable players like safety Malcolm Jenkins (reunited with the Saints), wide receiver Nelson Aghlor (known for dropped passes), and look to be moving on from left tackle Jason Peter (longtime Eagle). The Eagles now have a pretty impressive team and head into the 2020 season with a healthy roster and solid receiving core. If the team can stay healthy there is a good chance Philly will wake home the NFC East for the second consecutive year.

The Giants will be without quarterback Eli Manning who has been the starter for 15 years (16 years as Giant). Danny Dimes aka Daniel Jones is now trying to take New York to the playoffs in the future along with the help of running back Saquon Barkley, the face of the franchise. The Giants had the fourth overall pick in the draft and had the opportunity to add a great player to any position they needed. The Giants took the best approach they could and that’s picking up offensive tackle Andrew Thomas to boost up their offensive line and finally have begun building solid passing protection. New York wasn’t done there as they took three players to help their offensive line within the five rounds as they took Thomas in the first, offensive tackle Matt Peart in the third round, and guard Shane Lemieux in the fifth round. The Giants also took safety Xavier McKinney in the second round which has the potential to be the steal of the draft as he now joins strong safety Jabrill Peppers and cornerback James Bradberry in the secondary.

The Giants’ biggest signing in free agency was signing one of the top corners available in cornerback James Bradberry who signed a 3-year $43.5 million contract. Bradberry will make a huge impact in the Giants secondary as they were one of the worst secondaries in the league last season. The Giants also brought in running back Dion Lewis on a prove-it contract as they gave him a 1-year $1.5 million deal. Lewis will likely be the No.2 running back for the Giants giving them a solid backup and someone who will take some of the workload off Barkley. Jones will be playing in his second season where he will start the whole season after Manning was benched early into the 2019 season. Week 5-10 will be a crucial part of the Giants schedule as five of six of those games will be divisional matchups and if New York can go 3-2 during that span that will be good insurance towards the end of the season.

The Redskins had the second overall pick in the draft and were reportedly not trading it away and were locked in on drafting pass rusher Chase Young. That’s exactly what the Redskins did and took Young to improve their young defense that recorded 2.9 sacks per game which were tied for the seventh most. Washington now has the best pass-rusher from the draft to pair up with Johnathan Allen, Montez Sweat, and Daron Payne all of which are younger than 26 years old. With their young defensive line it may be the only exciting part of the team for a while as they didn’t do much on offense in the off-season. The Redskins took in running back Antonio Gibson in the second round who will likely be the starter for the future with Adrian Peterson getting older and with the departure of Chris Thompson. The Redskins took a big loss when they traded away left tackle Trent Williams to the 49ers who was probably their best player on offense as he was a 9x pro-bowler with Washington.

The Redskins decided to go out and trade for quarterback Kyle Allen who led the Panthers to a 5-7 record as the starter last season. Head coach Ron Rivera now reunites with Allen as they were both members of the Panthers at one point and this trade leaves the question of who will be the starting QB. Haskins and Allen will most definitely go at it during training camp but Rivera believes Haskins doesn’t have what it takes to be a backup and will his past relationship with Allen play a factor in the decision. Both quarterbacks are still very young despite Allen having a better record as a starter than Haskins. Allen was handed a better offense so we may not have seen enough of Haskins to determine if he can be a starter as we have only seen him start in seven games to Allen’s 12 stars. Washington’s season will depend on how far that defense can take them more than how their offense works with the little star power added to it.

The Eagles have the best chance to win the division as they are back healthier and finally have weapons for Wentz. The key thing for Philly to win is they must stay healthy in order to make a deep playoff run and could possibly be a dark horse for a run at the Superbowl. The Cowboys have a chance to win the division but will they finally get over their mediocre 8-8 record that they are portrayed as. The Boyz will need to prove it or they will continue to be the most over-hyped team in the league with potentially one of the best offenses in the league. The Giants had a good draft and could put up a run but they are just a young team with no experience lead by a quarterback going into his second year. That’s not to say Danny Dimes won’t be good it just he won’t be on Wentz level good to lead the team. Washington will have a tough decision on deciding who will start at quarterback week 1 but the front runner looks like Allen simply because of his relationship with head coach Rivera. The Redskins’ best chance to make the playoffs will be how much can their defense especially the defensive line carry them throughout the season.