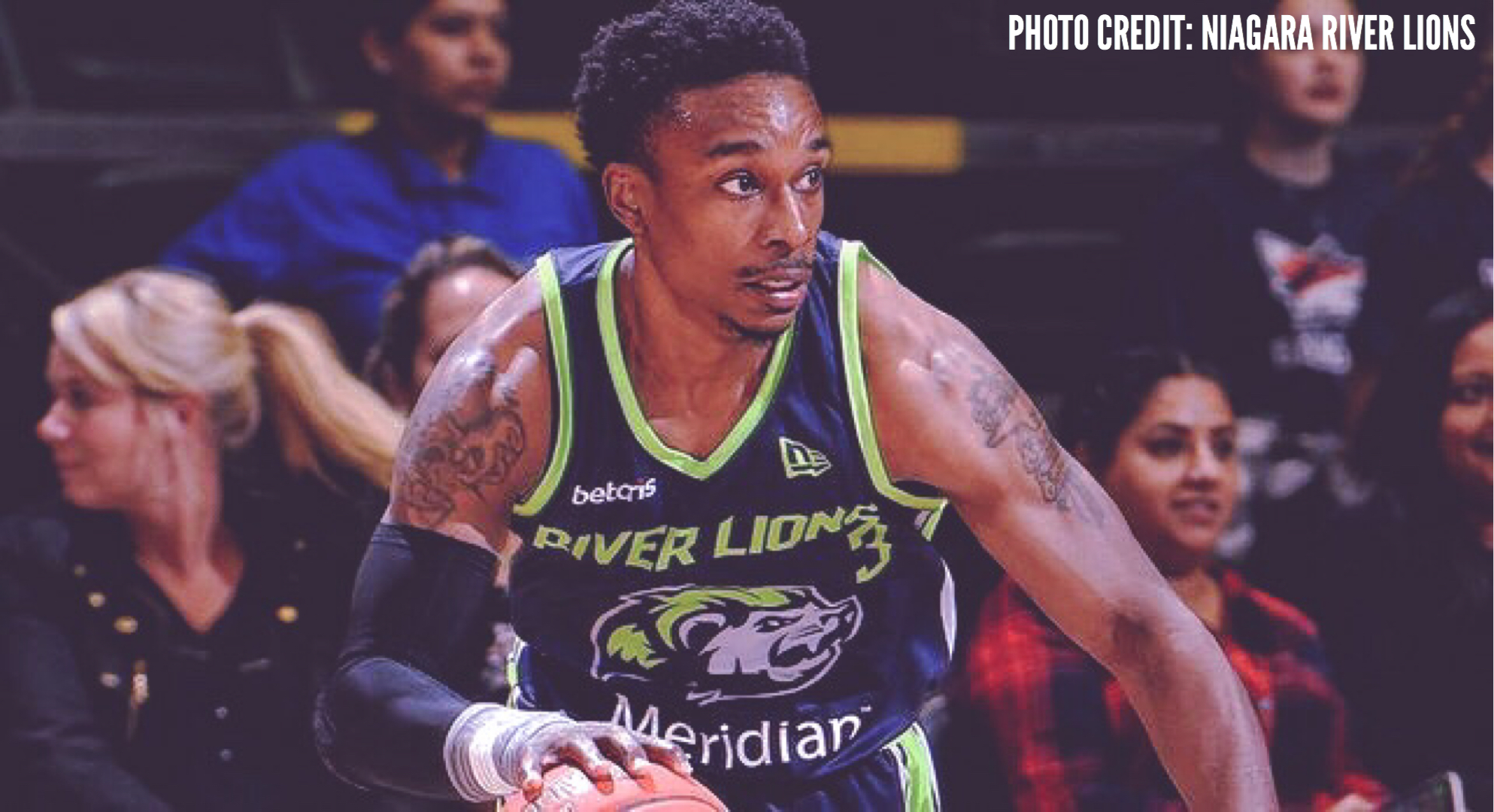 For those of you not aware, the Niagara River Lions are a professional basketball team in the Canadian Elite Basketball League, Canada’s premier basketball league. The CEBL is entering it’s second season.

The Niagara River Lions fell victim to an upset last year in the CEBL semi finals. Despite finishing with the top seed in the league, the River Lions lost to the underdog Hamilton Honey Badgers by a very small margin. Niagara immediately looked to the future, resigning a large portion of their players. The River Lions were one of the most consistent teams in the league, holding onto just a handful of players for the entire season. Most teams in the CEBL took some time to find their group of guys, as was expected in the inaugural season. The River Lions really stuck with their group of guys, and it worked for them.

Following suit, the River Lions brought back almost their entire roster this year, with over 50% of their roster returning. The River Lions tallied at 7 returning players, 2 players from other CEBL teams, and 4 brand new players to the CEBL. We’ll take a look at all these players at depth.

First off, the Niagara River Lions almost immediately insured that Coach of the Year Victor Raso was brought back. Raso did an incredible job coaching the River Lions to the best record in the league, and meshing the players really well together. This came as no surprise, Raso is the most accomplished coach in the CEBL, and there was really no reason to not bring him back.

The River Lions got their player signings rolling by signing Canadian of the Year Guillaume Boucard. Boucard was an incredible presence for the River Lions. He played pretty much every minute for the River Lions, and was definitely their best player. Boucard could score in volumes, and was extremely clutch for the River Lions last year. River Lions and Stingers fans might remember when Boucard hit a buzzer-beater in a highly anticipated game between the two teams. Initially, it was believed to be the game-winner, but was ruled the game-tying shot to send the game to overtime. Nonetheless, Boucard proved that he’s an incredible scorer, and a strong shooter down the stretch in that game and many others. Boucard also showed off his versatility in his ability to play strong defense and get rebounds.

Defensive player of the year Sam Muldrow also found himself back on the River Lions, following an impressive stint with the team last year. Muldrow famously recorded a league high 8 blocks in a game against the Fraser Valley Bandits. Muldrow is the last person you want to meet in the paint. Muldrow led the league in blocks per game, and made his presence felt each and every night. Muldrow isn’t as effective on offence, but he does have a decent shot. Muldrow took a few threes last year and converted on about 38% of them, which isn’t terrible for a big man, who’s the defensive player of the year.

Dorian Pinson was another returning player for the River Lions. Pinson was one of the most well rounded players for the River Lions last year, he isn’t really bad at anything. As one of the best two way players in the league, Pinson found himself in the top 10 in multiple major statistical categories, including steals, rebounds and points (qualified). Pinson is a hyper-versatile forward who can fit to play well with any combination of players. When you have a player who can do everything on the court, you’re so much better. Pinson made the River Lions so much better, and is highly respected around the league for his hustle, and intensity.

Alex Johnson is yet another returning player for the River Lions. Nicknamed Superman, Johnson is an absolute sniper, and much like Trae Bell Haynes, a phenomenal ball handler. Johnson is extremely well rounded offensively. He can pull up from anywhere on the floor, and is a strong slasher and finisher. He is a little bit rough on the defensive end, mostly due to his 6′ height, but Niagara always finds a good matchup for him. Johnson is a very reliable player, he’ll bring the ball up past half court, and always look to make the right play, and despite his nickname, doesn’t play hero ball.

Kassius Robertson returns to the River Lions after just playing a few games to start the season with Niagara. Robertson left the team to play for the Charlotte Hornets Summer League roster. Robertson didn’t make the Hornets, however just getting a chance to play in an NBA summer league makes him one of the best players in the CEBL. Last year we didn’t see enough of Robertson to really make a strong review of him, but based on his scouting reports, and highlights against the Hornets, it’s safe to say Robertson is a strong scorer, and tough defensive assignment. He could be really good for Niagara this year, or could get buried in the deep roster the River Lions are carrying.

The final returning player for the River Lions is Ryan Anderson. Anderson is a 6’5 guard out of Seattle who will score A LOT of threes. Anderson led the league in three pointers attempted, and three pointers made per game. Despite shooting over 8 threes per game, Anderson is ranked within the top 8 in the CEBL in three point percentage. This makes Anderson likely the best shooter in the CEBL. To have someone who can shoot 8 threes a game, and make 40% of them, adds such a deadly weapon to your roster. Anderson likely won’t be taking that many threes anymore, but he could, he’s proven he can make them. To put it into perspective, Anderson is playing just 22 minutes per game, in the NBA Ben McLemore is the only player shooting more than 5 threes per game in less than 23 minutes per game. The River Lions trust Anderson to take almost exclusively three pointers. (79% of Anderson’s shot come from the three point line).

Niagara drafted 3 players in the CEBL Usports Draft, where university players have a chance to play pro ball in the university off season. The River Lions selected Emmanuel Owootoah, Daniel Cayer and Kascius Small-Martin. When Niagara released their training camp roster, only Owootoah remained on the squad. It’s likely that Niagara either cut or will keep the other two players on the practice roster. Owootoah likely won’t see too much court time but could see time in garbage minutes.

Niagara’s first non-resigning player was Ryan Ejim, who played with both the Saskatchewan Rattlers and Hamilton Honey Badgers last year. Ejim continues his tour of the league now stopping off in Niagara. Ejim is a phenomenal big man, he ranked third in the CEBL in rebounds per game last year, and finished with averages of 12 points and 8 rebounds per game. Ejim is also the only player in the CEBL to average at least 1 block and 1 steal per game. Ejim is one of four players in the CEBL who average at least 1 block per game, and is the only of those four players to average double digits in points per game. This makes Ejim the most skilled, and also most underrated big man in the CEBL. Ejim will be a phenomenal big man presence for Niagara, and will continue to cause major problems for opposing players on both ends of the floor.

Niagara’s other non-resigning player was Abednego Lufile, who played for the Guelph Nighthawks last season. Lufile was one of four brothers playing for the Nighthawks at some point last season. Abednego didn’t see much court time, but is a promising young player that could stick around the CEBL for years to come. We can’t really say much for Lufile, except that he’s a player Niagara could look to use more than Guelph did, and it could pay off.

One of the new River Lions signings was 6’2 SG Daniel Mullings. Mullings is a Canadian who has lots of experience playing pro basketball overseas. Mullings played a long stint in Finland, and has played for teams in Israel and Germany. This will be Mullings first time being able to play basketball in Canada, as he grew up in Toronto, but would go off to New Mexico for college.

The River Lions signed another New Mexico product in Tyrone Watson. Watson is a 6’5 forward who has spent some quality time in the NBLC (National Basketball League of Canada) with multiple teams. Watson has also represented team Canada at various showcase events. Watson has had his share of controversy in Canada. Watson was one of 11 players fined and suspended by the NBLC for a pre game brawl before game 7 of the NBLC Finals. Watson’s team left the arena and refused to play that night, resulting in the forfeiture of the game.

The final player on the River Lions roster is Jake Babic. Based on my research, Babic is playing his first pro ball since graduating from Texas A&M. Babic averaged 5 points per game, and was a fringe starter for the team.

The River Lions have an insanely deep team, it’ll be interesting to see how they match up against the other top teams in the league. Niagara has shooters everywhere, lockdown defenders everywhere, slashers, playmakers and the Coach of the Year on the sidelines. There’s no reason to believe this team will fall short of a playoff berth, and perhaps championship.