Could Allen Iverson have had a carrer in the NFL? 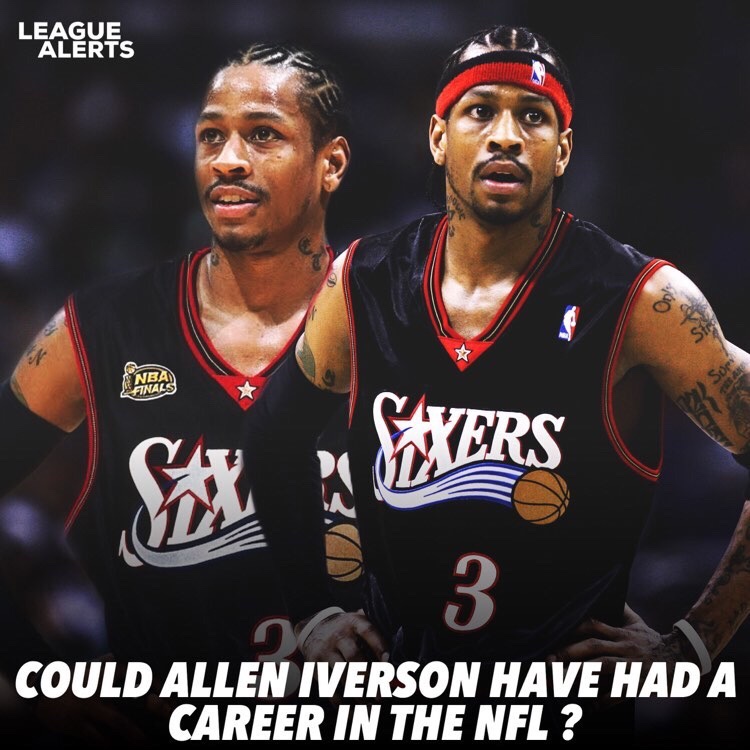 Allen Iverson is one of the best point guards to play in the NBA and will go down as one of the best players to step foot on the hardwood. Before becoming an NBA legend Iverson was an impressive football player in high school making some wonder what if he played in the NFL?

While Iverson was in high school he attended Bethel High School where he was a star on both the basketball and football teams. Iverson was the starting quarterback along with playing defensive back, kick returner and running back there wasn’t a position Iverson couldn’t play as he was very fast and shifty. During Iverson’s junior year in high school, he recorded 14 passing touchdowns, 7 rushing touchdowns, threw for 2,204 yards, and 13 interceptions along with leading Bethel to the Virginia State Championship.

With Iverson leading the basketball and football team to the State Championship he was named the Associated Press High School Player of the Year for both sports. As a defensive back, Iverson was just as good as he was at quarterback tieing a Virginia record with 5 interceptions in one game. During a semi-final game Bethel was down 16-0 in the fourth quarter Iverson would go on to throw for 2 touchdowns and complete a pair of 2-point conversions to force overtime. During overtime, Iverson would go on to rush for a touchdown and lead Bethel to a 22-16 win.

One day while Iverson and a few friends were at a bowling alley where they were supposed to have a good time, they quickly turned in the wrong direction. Iverson and his friends were involved in a brawl with another group of kids were some racial slurs were the start of a huge brawl. Iverson was convicted of three felonies and sentenced to five years in prison but after four months governor, Doug Wilder granted him conditional clemency. A part of the deal was Iverson would be allowed to finish high school but was not allowed to participate in high school sports due to this and his past crime many colleges looked away from Iverson except for Georgetown. Iverson would go on to attend Georgetown where he would play basketball and leave his football career behind him.

During an interview with Slam Magazine in 2012 Iverson revealed during his freshman year he told John Thompson who was the head coach of Georgetown basketball about playing football for Georgetown.

“He said, ‘I’ll tell you what I think about you playing football. If you don’t get your skinny black ass the eff out of my face…you better,'” Iverson told Slam. “Just like that. I never thought about playing football again after that. I mean, he made it clear that this is not why I was here.”

Thompson would ultimately tell Iverson to stick to basketball and it turned out because Iverson became a 2001 MVP, 11x All-Star, and Hall of Famer. Iverson was one of the greatest point guards the NBA has seen in recent history. But Iverson has come out to say during a 2016 interview that he still thinks of what would have happened if he played football.

“Football is always going to be my No. 1 sport,” Iverson told Doug Gottlieb of CBS Sports last May. “It was my first love. Obviously if things went another way, I probably would have ended up playing football instead of basketball, but God got his way of doing things.”

With that being said Iverson leaves all thinking what if he had gone on to play in the NFL? Would he have had the same impact in the NFL as he had in the NBA, would he go down as one of the greatest to play the game? Lastly, the biggest what if would be if Iverson stepped on the gridiron would he have won a ring during his NFL career, something he failed to do in the NBA.