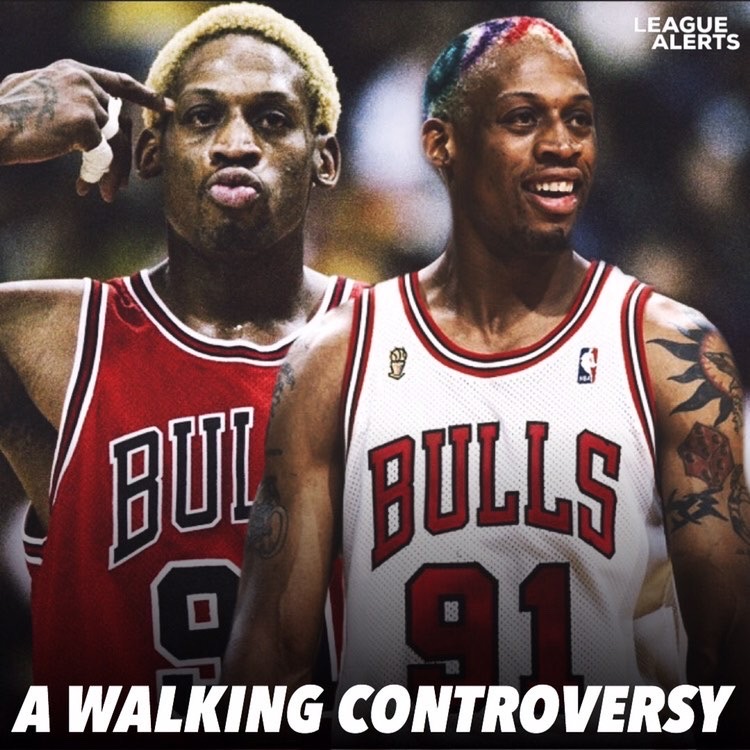 Basketball fans all over the world seem to be hooked to the new Netflix series “The Last Dance”, which focuses on the 1997-98 Chicago Bulls team and how they got to the point they were at that same season. But there’s one figure in this team full of hard-workers and players who perfectly understood their roles, that stands out like a sore thumb and that is none other than Dennis Rodman. You can judge it by yourselves just by taking a quick look at that season’s team picture and see who sticks out the most out of all the players.

Almost right in the middle of the photo, right next to Jordan, is Rodman, characterized by his outlandish hair color, which he always kept on changing. And nothing describes the former Bulls player than this picture right here. In a league full of regular looking guys, he always stood out the most, whether it was his hair, his multiple piercings around his face or his extravagant clothes, Dennis always found a way to make himself noticed.
But leaving aside the obvious, let’s dive a little bit deeper into his story.

Dennis Keith Rodman was born on May 13, 1961, in Trenton, New Jersey, but was raised in Dallas, Texas by his mother and his two older sisters. During his high school basketball career, he wasn’t very successful and spent most of the time on the bench, when he wasn’t cut from the squad. Not only that, but to add insult to injury, his two sisters were extremely talented, even became All-Americans eventually, and made a laughing stock out of him. At the age of 19, he was kicked out of the house by his mother and was homeless for 6 months.

Dennis Rodman, during his years at Southeastern Oklahoma State University

But he overcame all these struggles and started playing basketball again after a sudden growth spurt. He played one semester for Cooke County College’s basketball team, averaging 17.6 points and 13.3 rebounds per game, and after that season he transferred to Southern State Oklahoma University, where he played for three seasons putting up 25.7 points and 15.7 rebounds per night.

He entered the NBA Draft in 1986 and was drafted by the Detroit Pistons with the 27th pick. He would become part of the ‘Bad Boys’, the late 80’s-early 90’s team famous for their aggressive style of play. Rodman fits in the team perfectly, as he has always been regarded as a tough defender by his teammates and his opponents and also a great rebounder. With the Pistons, Dennis won two NBA titles and also won back-to-back Defensive Player of the Year awards.

But after all these successes, came the darker times. From coach Daly’s death, whom Rodman regarded as a father figure to him, to the divorce from his first wife, Annie Bakes, the forward’s life seemed to be going on a downward spiral. This lead to what could have been a tragic event, as the player was found asleep in his car with a loaded rifle parked outside of The Palace. He, later on, he confessed in his book, As Bad As I Want to Be, that he was planning on committing suicide that day. Luckily, he didn’t do it, but after all of this, his career with the Pistons was pretty much over. He was traded to the Spurs and played alongside Hall of Famer David Robinson and it was around the same time as he started to act out, by changing his hairstyle, wearing extravagant pieces of clothing and, most importantly, clashed with the Spurs’ front office.

The Spurs eventually got tired of his behavior on and off the court and he was traded to Chicago in exchange for Will Perdue, to fill out the role that was empty after Horace Grant had left Illinois’ team. Under the orders of Phil Jackson and alongside Michael Jordan and Scottie Pippen, the Bulls managed to win the 1995 NBA title as well as set the former record for most wins during the regular season, winning 72 games.

From then on, Rodman became NBA champion two more times but not without some struggles along the way. One of the biggest obstacles that I feel that come to everyone’s minds is Scottie Pippen’s injury, as we have all seen it in ‘The Last Dance’. Michael felt like he was alone and in desperate need of some help to carry this team to some wins during the time that Scottie was out and it had to be Dennis. After getting ejected in one of the first games of the season, he realized that he was letting everybody down, especially Jordan. So, in Dennis Rodman’s way, he apologized to him and started to play the role he was meant to until Pippen was back. This season ended up being a successful one once again for Chicago, who completed their second three-peat by beating the Utah Jazz, whom they had beaten in the previous NBA finals.
After the end of this season, the team split up. Pippen was traded, Jordan retired for a second time and Rodman was released from the team in January 1999 and went on to play for the Lakers and the Mavericks before retiring from the NBA. But he continued to play in the ABA (American Basketball Association), the British Basketball League, and a few exhibition games over in the Philippines.

Dennis Rodman has been, without a shadow of a doubt, one of the most controversial players the league has ever seen, if not the most, but honestly, after watching the documentary I sort of miss players like this in the NBA as they made the game more fun and entertaining. You can also tell Rodman made a huge impact in the league with his style of play, especially in that era, as players as defensively tough and dedicated were more glorified than nowadays. His passion and his energy on the court, whenever he was motivated, were unparalleled and I would have loved to have him on my side if I was playing in the league. Despite all the noise and the drama surrounding him, you can tell that Dennis Rodman was a passionate student of the game who devoted his life to this beautiful sport and became one of the best rebounders and defenders in the history of the NBA, and for that, I salute him.