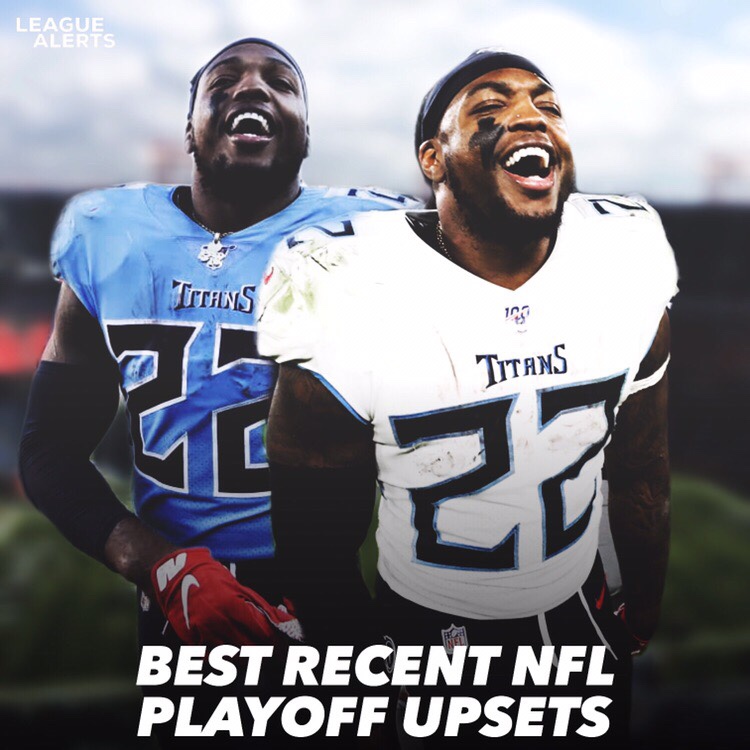 Going into the playoffs every year, there are dangerous wild card team or lower seeds, who many people boldly predict to upset higher seeds. However, most years we do see either 1 or 2 seeds make the Super Bowl, with minimal upsets. Here is a personal top 5 list of recent NFL Playoff Upsets.

Just this past season, we saw an impressive upset by the 6th seeded Tennessee Titans, who took down the New England Patriots and then the 14-2 Ravens. They had a resurgent second half of the year, led by a tough defense, MVP candidate Derrick Henry, and quarterback Ryan Tannehill. After making Tannehill their starter, the Titans took off, and they did not slow down in the playoffs. Many people had the Ravens in the Super Bowl, but the upstart Titans and King Henry had other ideas.

This 6 over 3 seed upset broke one trend and continued another. Kirk Cousins was finally able to win a big primetime game, and did it on the road. This left Saints fans devastated, as they lost in the playoffs for the third straight year, all on the last snap of the game. This upset was a huge one, as the Saints were only the 3 seed due to a tiebreaker, and were a very trendy Super Bowl pick. However, the Vikings rode a great game from Dalvin Cook and their defense to win it 26-20 in overtime.

An iconic Super Bowl, won by a backup quarterback, against one of the NFL’s most dominant dynasties ever, in the midst of their peak. There are so many reasons why the Philadelphia Eagles shocking Super Bowl win will be remembered for years to come. The Philly Special is one of the most iconic trick plays in NFL History, with Nick Foles catching a touchdown pass from tight end Trey Burton. The game was high scoring, with both teams making big play after big play. In a late game drive for New England, Brandon Graham sacked Tom Brady to seal the win for the Eagles, an pull off one of the biggest Super Bowl upsets ever.

The Jaguars 2017-18 run was extremely impressive, but not many thought they would advance to the AFC championship game. They had just beaten the Bills 10-3 the week before, who ended the game with Nate Peterman playing. Certainly not convincing. However, against the Steelers the Jags offense exploded, in a 45-42 upset. This was the peak of the triple B’s for the Steelers, and maybe their best chance to get to a super bowl with that core of players. However, the Jaguars did just enough, and in their first playoff season in years, were one play from the Super Bowl against the Patriots.

This game had so many story lines to it. If the Broncos win, we get another classic Brady and Manning matchup, with a trip to the big game on the line. There is also a matchup between Manning, the legendary former Colt, and Andrew Luck, his predecessor the Colts drafted as Peyton left for Denver. At the end of the day, the Colts prevailed, Luck slayed the dragon by getting a signature playoff win under his belt, and beat the legendary quarterback he replaced. Everyone was predicting another Broncos and Patriots conference Championship game, but the Colts hung in with good defense and big throws by Andrew Luck. Now that he is unfortunately retired, this can be looked at as Luck’s best and most signature win of his career.