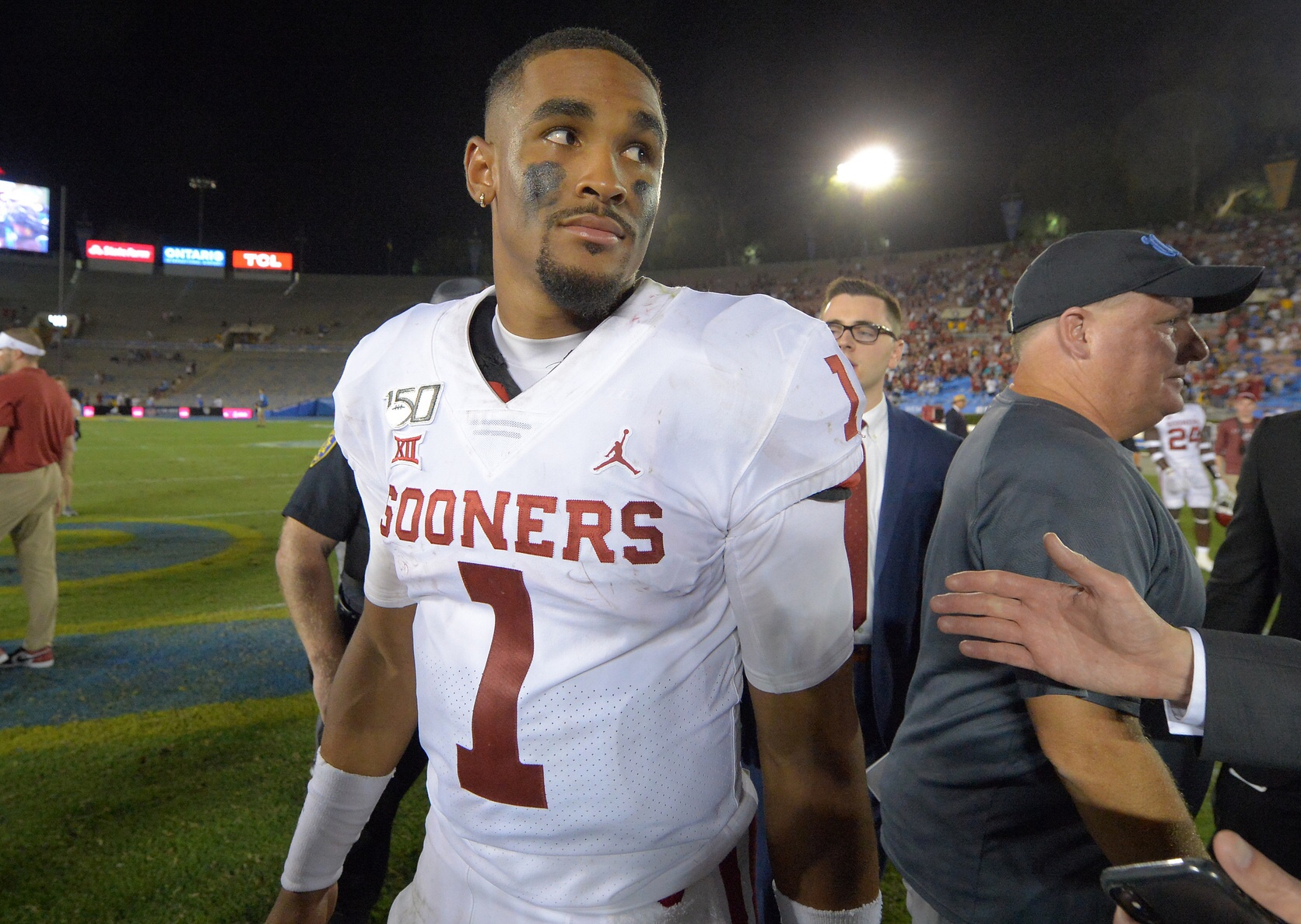 With the 2020 NFL Draft coming to an end, we saw pucks that came with no surprise – like Joe Burrow to Cincinnati. We saw some teams address positions of obvious need – like Jacksonville, who used both 1st-round picks on the defensive side of the football. Then, there were picks that made everyone scratch their head and ask; why would they pick that guy? How did he end up there? Here are five selections nobody saw coming during the draft.

McKinney was one of the top safeties in the 2020 draft, and could be argued as the best. Somehow, he fell out of the 1st round and then was immediately stolen by New York, in the 2nd-round. There were many teams that were in need of safety in the 1st-round, yet they passed on him rather than addressing a dire need. The positional value must’ve not been at safety, as Mckinney was the first true safety to be selected in the draft.

A steal for the Giants as they addressed their need at safety, and got one of the best available. McKinney was a projected 1st-round talent. Questionably, he fell to the early 2nd-round, which had analysts questioning their analysis. McKinney was regarded as the best all-around safeties, in the entire class. This was one of the best possible outcomes for New York, as they got a top tier offensive tackle in the 1st-round, and got a top tier safety in the 2nd-round. It patched up two spots that needed desperate help. Pairing him with Jabril Peppers, will make for one of the rangiest safety duos in the league.

#4: Ceedee Lamb to the Dallas Cowboys

Nobody saw Lamb falling down to the 17th pick, since many thought he was a certain top-12 pick. Teams like the Raiders, Cardinals, and the Broncos where seemingly destined to grab the Sooner alumni… Well, Lamb fell. When the Falcons were on the clock, 16th overall, they seemed hesitant to take Lamb; with an already stacked receiving core. When Roger Goodell announced Atlanta’s pick, cornerback A.J. Terrell, Cowboys owner Jerry Jones probably fell out of his chair in excitement. Jones had the opportunity to add more offensive firepower. For whatever reason, it made Dallas lose sight of their real need – defense.

The need for help on the defensive end, was greater than the need for another receiver. The Cowboys choose to pass on players like K’Lavon Chaisson, who could’ve brought some more pass to their defensive line. Dallas also missed on Jeff Gladney, who could have aided their secondary with the departure of Byron Jones. Lamb, seems like a luxury pick for the Cowboys. Rather than going for team needs, it went with the overall best player.

Maybe, this was a pick Jones wanted so quarterback Dak Prescott, who will be playing for new contract, with have no excuses. This may have been a smart move in Jones’ eye, so he can see if he needs to give Prescott the big check.

The Raiders addressed two of their biggest needs with their two 1st-round picks (12th and 19th). Like any other Jon Gruden – era draft, one was very questionable and had people scratching their heads. Las Vegas sent out a little shock wave when they selected Henry Ruggs II but what do you expect? The Raiders are known to be in love with fast receivers. They sent out an even larger shock when they selected cornerback Arnette; instead of going for a higher-end prospect like Jeff Gladney, Noah Igbinoghene, or Trevon Diggs.

Although Arnette was considered in the range of top-10 to top-5 corner, many analysts believe it was a reach to get him that early. Many expects sought him as a day two prospect. Raider fans were put in a familiar state of mind, as last year Oakland selected defensive end Clelin Ferrell with the 4th overall pick. Same as the Arnette pick, many people believed it was a questionable selection. Once again the Raiders decide to do it their way, adding the best player they feel will help their team.

The Raiders get their guy, who could very well be a good player for the team; but could they have traded back in the draft to get more picks, and still get Arnette? Probably. Like we previously mentioned, Arnette was likely a round two prospect. Reaching on him alone, could prove to be a massive miss… only time will tell.

#2: Jalen Hurts to the Philadelphia Eagles

This was quite a shocker for the entire league. In most minds, the Eagles would be the last team to select a quarterback in the 2nd-round. Perhaps, Eagles fans thought they would be getting a quarterback, but not that early in the draft. If it was a day three pick, we wouldn’t be here talking about it. Now obviously Carson Wentz, will remain the starter for the Eagles. The question is, why would they select a Hurts that high up in the draft, just to backup Wentz…?

What hurt Philadelphia’s playoff-run last year was injuries, and especially in the one to Wentz; who got injured on the first drive during the playoffs. In all fairness towards the Eagles, Wentz has had a woeful injury history. It’s possible the Eagles wanted a solid backup, to replicate what Nick Foles production the next time Wentz, goes down. There have been reports that believe Hurts, will play a role similar to Taysom Hill. Hills acts as New Orleans swish army knife. He plays some quarterback, running back, receiver, tight end… you see where this is going; literally every offensive position. It’s a possibility Hurts, will play that type of role for the Philly.With those reports coming out, we can expect to see Hurts and Wentz, on the field at the same time. The Eagle could create a rendition of the famous, “Philly special”.

There’s also speculation that Hurts was a selection to be the future starting quarterback. If Philly decides to move on from Wentz any time soon, it’d make sense since to draft Hurts.

Nobody saw this pick coming, not even an NFL analyst could see the Packers using their 1st-round pick to draft a quarterback. Rather than helping quarterback, Aaron Rodgers, they decided to draft his future replacement. Not only did the Packers draft Love but they traded up in order to pick him. Rodgers still has at least two more years left in Green Bay, with four years at max. Why did the Packers decide to plan for the future, rather than going for a need like a receiver that could make an instant impact. Rodgers, is still an elite, top-5 quarterback in the league as well. If they’d selected a wideout, it could’ve very well been the missing piece for another potential run at the Lombardi. Green Bay’s likely hoping Love will be taken under Rodgers wing, and turn him into a hall-of-fame caliber quarterback; similar to what Brett Favre did with Rodgers.

Although, Rodgers would not publicly state he does not like the selection, he should be a tad upset… The fact of the matter is, the Cheese-heads, have yet to draft a skilled player in the 1st-round during his entire 15 year career of being with the team. Why would the Packers choose not to give Davante Adams, some help. They know he can only do so much for the team, and they could really use a solid #2 receiver, considering Adams missed some time with injury.

Maybe this will work out for Green Bay. They are still one of most respectable franchise, with their success. While the draft choice was iffy, this could be a hint that Rodgers’s time is coming to an end in Green Bay, and the coaching staff felt very confident in Love leading the future. It might just be one of those dumb selections a franchise makes once in a while. This pick is expected to play a huge role during the Packers 2020 season. The relationship between the Packers and Rodgers, may have been stunted over this. Not only did the Packers pass on a wideout in the 1st-round, they passed on one for the entire draft. A total of 36 wide receivers were taken in the entire 2020 draft; Not a single one was picked up by the Packers…