John Collins: Is he the next AD? 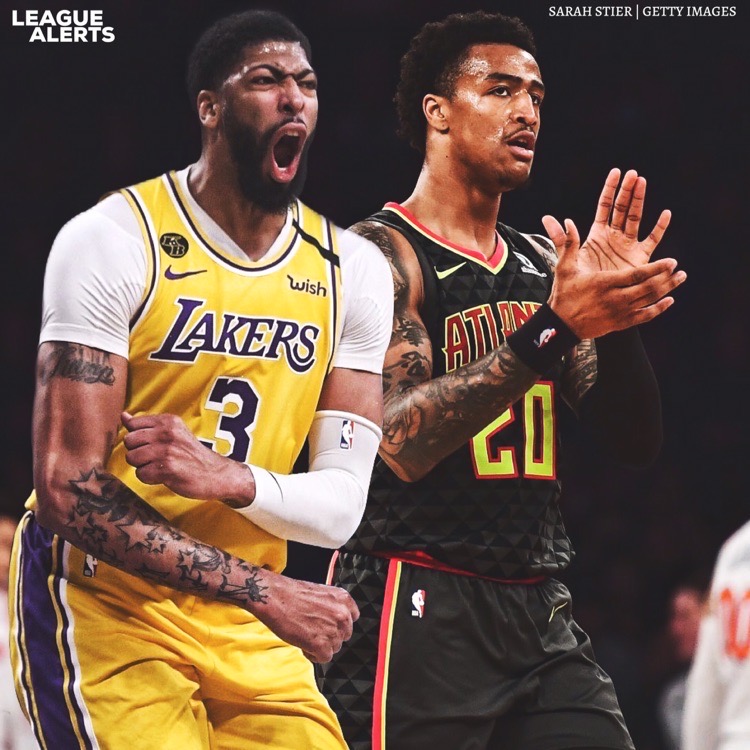 This year, the Atlanta Hawks have been one of the worst teams in the NBA and you can tell that just by looking at their record. It’s the fourth-worst, only beaten by the Golden State Warriors, the Cleveland Cavaliers and the Minnesota Timberwolves.

So, as you might expect, the fans have had few things to be happy about, but one of them has been John Collins. The 6’9” power forward out of Wake Forest has played lights out throughout this season and was averaging prior to the suspension 21 points and 10 rebounds a night, which is an improvement in both departments compared to his last season, which was already pretty good as well.

Not only has he scored more, but he has also done it in a more efficient way, shooting 58% from the field, 40% from three and 80% from the line. If that stat line didn’t sound great enough, we also have to add that his efficient field goal and true shooting percentages are up as well (63% and 65%, respectively).

To any person with any sort of knowledge on basketball, these numbers sound like music to their ears, but it gets better when you look at his stats during February and post All Star break.

During the second month of this year, he has averaged 25 and 10, shooting 63% from the field and well over 50% from deep. And, in the eleven games he played after All Star weekend, he was averaging 24 and 10 with 1.1 steals and 1.5 blocks a night to add to his stat line.

John Collins is your typical modern interior player. He gets most of his points from close range, but he can also score from beyond the line, knocking down over 40% of his shots from three.

Another aspect of his game that will make both the fans and the organization from Georgia happy is how seemingly perfect his connection with Trae Young is. Often in games, you can see these two connecting on multiple occasions, whether it’s Collins setting a screen for Young or the point guard finding the big man open, these guys seem to work well together and the stats back them up. John scores 57% of the shots that come from Trae’s assists as well as 47% of the threes. If I were an Atlanta fan, I would be really happy to hear this.

Collins compensates his average size and length for the power forward/center role that he plays with his athleticism and strength, which make him a threat near the rim and on the fast break. He can go up and down the field quicker than most of his opponents and defenders must always keep an eye out for him as he’s a constant lob threat.

He is a great pick and roll player and can drive to the basket with ease. He also doesn’t shy away from contact inside the paint, you might say that he even welcomes it, as he scores almost 53% of his shots that are very tightly contested and that number skyrockets to 64% if the player guarding him doesn’t defend him as tight as possible (meaning he is 2 to 4ft away from him).

When it comes to rebounding, his athleticism comes in handy once again, making him one of the best in the NBA. He is 14th in the league in rebounds per game and 16th in offensive rebounds per game.

But, a part of his game that is still doubtful is his defense and most importantly his defensive IQ. He is one of Atlanta’s worst defenders, allowing around 47% of his opponents’ shots to go in, although his numbers did improve after the All-Star Break. Still, all critics can agree that defense is a subject in which Collins must improve if he wants to become an elite player.

Adding to the negative aspects of his game is his mid-range shot, which is awful, to say the least, especially in catch and shoot situations, his offensive rating is down from last season (even though it improved after the All-Star weekend), his plus-minus is a -4, his pull up game is pretty much non-existent, he tends to foul quite a lot and his offensive game can become quite predictable at times, as the Hawks rely a lot on him setting a screen up top for Trae and then him dissing it off to Collins for the finish. But it must be said that it works and as the saying goes, if it ain’t broke don’t fix it.

So now, how could someone say that he could become the next Anthony Davis? Well, let’s look at both players’ numbers in their 3rd season.

You can see that AD was, and still is, a great defender but Collins has the tools and potential to become equally as great if he puts his mind to it and works hard towards it. You can also see that he is a more efficient scorer and even to this day has a better 3-point percentage than AD, with a similar number of attempts (40% vs 33.5%).

And you must also take into account that, while Anthony Davis was the primary option in that New Orleans team, John shares the floor with Trae Young, one of the league’s top scorers, which leads to him getting fewer touches, which means fewer opportunities to take a shot and a lower PIE. I’m not trying to say that he is going to be as great as Anthony Davis is, I’m just trying to argue that he isn’t as far away from his level of play as people might think and that Atlanta might have in Young and Collins a future superstar duo if the forward can take his game to the next level.