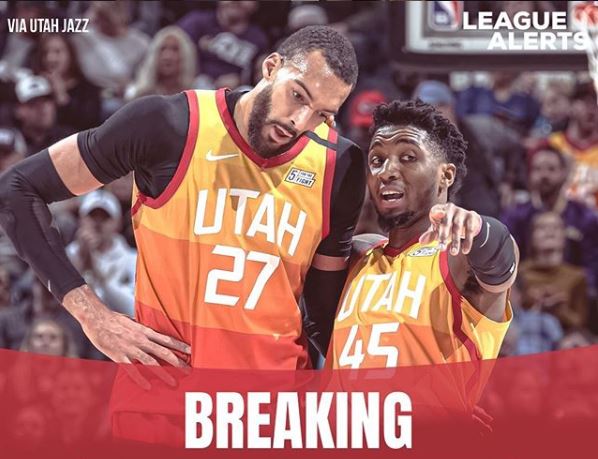 Despite the NBA season currently being suspended, there has still been lots of news about how the Coronavirus is affecting the NBA. There’s more news on the severity of the virus and several NBA players that have stepped up to help their communities and there’s more news of people contracting it.

The 2020 Tokyo Olympics ended up being postponed because of Covid-19. After last year’s FIBA disaster with the majority of America’s best players dropping out to prepare for the season, players like LeBron James and Joel Embiid were planning on making up for that this year. Well, that’s going to have to wait as the IOC has officially announced that the Olympics are going to be pushed back a year to stop the spread of the virus and ensure that everyone is safe.

The NBA has been suspended for about two weeks now, but the general census is that both NBA players and owners are planning for the season to start back up again. Many NBA players such as Christain Wood, Rudy Gobert, and Donovan Mitchell have all been confirmed to have recovered from Covid-19.

The risk of spreading the disease is still prevalent, though. An idea that has been circulating in the NBA is to hold the remaining NBA season in the Bahamas where there are reportedly only 10 cases as of this being written. Holding the remaining NBA season there with no fans seems like a great idea for the season to continue with very low risk to everyone involved.

Although many NBA players are recovering from the virus and none of them have experienced any scary symptoms, the cases continue to come in. Reports came in that Karl Anthony-Towns’s mother has tested positive for Covid-19. Another case is ESPN’s Doris Burke. Burke is one of the most phenomenal announcers that television has ever had and it is terrible to see her go down with it. It’s very sad, but at 54, she’s unlikely to experience any major symptoms.

As Coronavirus rages on, more players in the NBA and other sports continue to donate to help the cause. Joel Embiid donated $500K to help with Covid-19 relief and help the NBA workers get their salaries whilst being unemployed. Embiid also got the Sixers organization to ‘do a 180’ on their salary reduction plan and are going to continue paying their workers at full price.

Clippers owner, Steve Ballmer, also is helping the cause. He is donating $25 Million to help fight Coronavirus. Disgustingly, he and Marc Cuban are currently the only two owners to donate anything to the cause. The other billionaire owners decided that the thousands of people suffering, including in their organization are not worth a small fraction of their billions of dollars.

More sports players have also donated. Anthony Davis teamed up with Lineage Logistics and are donating $250K in meals for those who can’t afford it. Dennis Smith Jr bought 575 meal vouchers for the first responders in his hometown as well as 32 computers for students to be able to learn whilst schools are closed. Kyrie Irving is donating 200,000 burgers to the food bank to help feed the hungry. Danilo Gallinari is also donating 400 Covid-19 test kits as well as hospital supplies. It truly is a great showing by NBA players as so many of them are helping their communities both inside, and out of the NBA.

NFL players have also been donating to their communities. Drew Brees, Quarterback for the Saints, donated $5 Million to New Orleans to help all of those in need. Detroit Lions Quarterback Matthew Stafford is paying to feed and supply hospitals and students in Detroit, a multi-million dollar investment.

Although the cases worldwide continue to rise, it seems the NBA is almost through with this virus. The NBA season can’t start up again until June, and it’s looking like that may happen. This summer may be one of the most fun ever and, for all we know, the wait may be worth it. As long as no new cases occur for NBA players and the players that have it continue to heal, expect the NBA to return this summer.