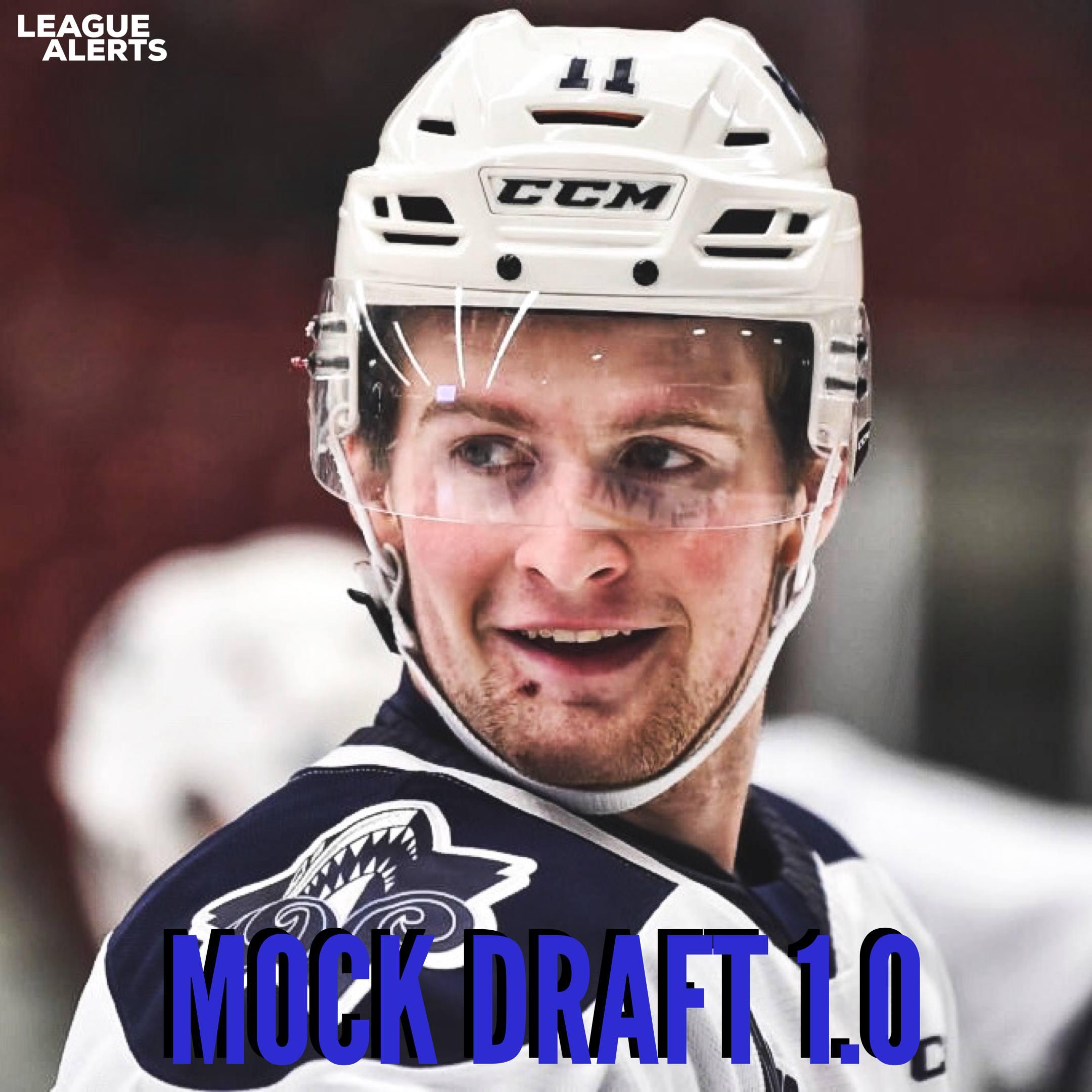 18-year old Alexis Lafreniere is the consensus by every NHL scout out there, as he draws comparisons to the likes of Mario Lemieux and Sidney Crosby due to his large scoring totals in the QMJHL, with a stat line of 35-77-112 in just 52 games this season, good for a point per game total of 2.15, and putting him in the top 10 highest point per game totals in draft year CHL history. Lafreniere uses his above-average size frame to get himself to the net, attacking the crease and using himself as a net-front presence. Despite being a star, Lafreniere uses a lot of grit and physicality to his game, as he isn’t afraid to get in his opponent’s face if he sees the situation fit. Lafreniere can often take control of games, and dominate the opponents. Lafreniere has the talent to make bad passes from his teammates into scoring chances and make split-second decisions that lead to a goal, as his hockey IQ is off the charts. Lafreniere has a PNHLe of 104, which means that he is projected to put up that point total in his prime in the NHL. Lafreniere has also amassed an outstanding 55% on the Rimouski Océanic points this season, showing what a dominant force he is and how important he is to the team. Despite all of that, Lafreniere isn’t only limited to an offensive game, as he also is very talented in his own end, as he’s relentless on the backcheck, works hard, and will grind in the corners to get the puck in battles.

Quinton Byfield is a whole year younger than Alexis Lafreniere, as he won’t turn 18 years old until after the draft. One thing that is rare for people Byfields size, that he possesses, is his monster size, standing at 6’4″ and 214 pounds, he’s bigger than most people who are already in the NHL, to begin with. Along with his size, many scouting reports show that Byfield is a tremendous skater, and extremely agile for a player of his frame. Byfield has a stat line of 32-44-76 in 42 games played with the Sudbury Wolves of the OHL this season and has drawn comparisons to the likes of Evgeni Malkin and Rick Nash coming into the draft, two big players who can control and dominate play, and have good puck handling skills, who went top 2 in their respective drafts. Byfield is 2nd overall on almost every single main mock draft, HockeyProspects.com, Future Considerations, McKeen’s Future, EliteProspects.com all among those, but ISS Hockey has him ranked at 4th overall, as multiple players have emerged as potential 2nd overall picks over the last couple of months and challenged Byfield for his draft position, nonetheless, Byfield ranks 2nd overall on my mock draft.

Marco Rossi is the third straight CHLer in my mock draft, making the league occupy my entire top three. Rossi is ranked lower in most mock drafts, ranging anywhere from 5 to 9, mainly due to his height, however, I don’t believe that this is a valid reason for having him this low, especially due to the fact that he is built fairly large for a player of his height, at almost 200 pounds, he is around the frame of Sidney Crosby, and plays like him too, possessing a high IQ for the game along with an elite two-way game, Rossi is a can’t miss at our number three spot. Rossi is also one of the best players at 1v1 battles in the entire draft, especially in the corners, he seemingly can’t use and uses his strength to get players off of him and get the puck. Rossi is a pass-first player, with his elite playmaking abilities, he seems to always get the puck on his teammate’s tape with his precise passing and vision, along with his quick hands to get around his opponents. Rossi absolutely tore up the OHL this season, with a stat line of 39-81-120 in 56 games played with the Ottawa 67s, good for a point per game total of 2.14, just 0.01 short of Alexis Lafreniere. Rossi also has a PNHLe of 102 and has contributed to 45% of the 67s points, and 15% of the team’s goals.

The first European in the mock draft is Anton Lundell, at 4th overall. Lundell has arguably the best two-way game in the entirety of this draft, drawing comparisons to Patrice Bergeron in that aspect. Lundell has elite Corsi numbers in the LIIGA, a men’s league, and it is evident in the way he plays that he is a guy you want taking defensive zone faceoffs for you. Lundell isn’t necessarily a player who will get fans out of their seats, as apart from his defensive game, all he possesses is a good wrist-shot, and he isn’t very fancy with the puck, but he is poised to be a top analytical player that coaches will love to coach for years to come. Lundell is also one of the most mature players in the draft, and likely won’t have to play on the wing in the NHL before adjusting to the center due to this. Lundell’s standard numbers are very impressive as well, as he has a stat line of 10-18-28 in 44 games played this season, which is very impressive for an 18-year old in a league of developed men. Lundell has a PNHLe of 53, and I project him being a guy who can put up 55-60 consistently, while also racking up a couple of Selke trophies. Unfortunately for Finland, Lundell was injured for the World Juniors this year, but I would expect him to be ready to represent his nation at the tournament in 2021, as I don’t project him being the first-year NHLer.

Another CHLer emerges as Jamie Drysdale is the first defenseman in my mock draft. Drysdale is a right-handed defenseman, which is extremely valuable in the NHL nowadays, and along with that, he can drive a powerplay at an elite level, and drive offense. Drysdale is classified as a two-way defender, but I see him more as an offensive based defenseman than a defensive player. Drysdale reminds me of a Calen Addison type prospect, and a player like Torey Krug at the NHL level, due to their ability to drive a powerplay, and rack up points. Drysdale is really good at controlling the puck, and when it’s on his stick, you can always expect some mesmerizing move by him to get free and create some offense. Drysdale has maintained an almost point per game pace this season with the Erie Otters, with a statline of 9-38-47 in 49 games played, accounting for 26% of his teams points. Drysdale has a PNHLe of 70, projecting about 30-35% of those to be from the power-play, he’s going to be an offensive talent who still doesn’t make too many mistakes defensively either.

I have another German going 6th overall this year, repeating that of Moritz Seider (Detroit Red Wings) in 2019, with Tim Stutzle being drafted out of Mannheim in the DEL. Stutzle has absolutely tore up Germany this year, with a statline of 7-27-34 in 41 games played this season, not to mention his very impressive showing for Germany at the World Junior Championships, with 2-7-9 in 8 games played. Stutzle is a puck-carrying playmaker, however he doesn’t shy away from driving shots to the net, as he averaged two shots per game in the DEL this year. Stutzle can also play the center position, and we could see him down the line playing down the middle in the NHL, him being able to play both the wing and center makes him a very valuable asset. I feel Stutzle has become somewhat overrated due to his impressive showing at the World Juniors, but I do feel he can definitely be an important top-six forward or second line center in the NHL.

Cole Perfetti is a CHLer who ranked as high as 3rd on my mock drafts at the start of the season, and while he has fallen down a bit, it is at no fault of his own, as he has been dominant for the Saginaw Spirit in the OHL all season long, with a statline of 37-74-111 in 61 games played for the team. Perfetti is among one of the smartest players in this draft, as he’s a good playmaker who also possesses an elite shot and always competes when he is on the ice. Perfetti has really good vision of the ice, and can always anticipate what is going to happen prior to it happening. Perfetti’s hands are something that many people are in awe of, as he can slice and dice his way to the net with ease and make defenders look absolutely foolish, which would make him a very good option for a powerplay quarterback in the NHL. Perfetti has a PNHLe of 92, and I believe that would be split evenly between goals and assists, as he doesn’t seem like a player who favours one of those over the other. Perfetti has proven to be a vital piece to Saginaw’s offense, contributing for 39% of his teams points, and 13% of his teams goals.

Raymond, like Anton Lundell (4) is a European forward with a very good two-way game. Raymond also has excellent vision and an amazing shot, along with quick, precise hands which make for a lethal trio on the powerplay, which you can expect him to be a valuable asset on in the NHL. Raymond plays a complete 200 foot game, and many say he can almost compete with Anton Lundell in the defensive end, which is much more rare for a winger to do than a centerman. Raymond is a little lighter than you would hope for a guy his height, sitting at just 165 pounds while standing at 5’10”, and he isn’t as strong as the other prospects in this draft class, so you would hope that he could put on some muscle by the time he makes it to the NHL. Raymond has a statline of 4-6-10 in 33 games played in the SHL, which is very good for a 17 year old in one of the best leagues outside of the NHL, and he holds a PNHLe of 46.

Connor Zary at 9th overall could be seen as an off the board pick, as he is usually around 13-17 on most mock drafts, however I think the defensive aspect of Zary’s game is something that is overlooked by most scouts. Zary has patience both with and without the puck, always waiting for the opposition to make the first move before he does. Zary is also one of the most clutch players in this draft class, if not, the most clutch, as he always wants the puck on his stick in latter part of the game, and always rises to the occasion. What Zary can do on special teams is the most rare of all, as he can play on the teams first powerplay and penalty kill due to his elite two-way game. Zary has a statline of 38-48-86 in 57 games played with the Kamloops Blazers of the WHL, and a PNHLe of 72, which if Zary can even reach 70 points while also being a top unit powerplay and penalty killer in the NHL, could make him the most valuable player in the draft outside of Alexis Lafreniere.

The final player in my mock draft comes from Djurgardens IF of the SHL, Alexander Holtz. Holtz is a pure goal scorer, he won’t be a defensive presence, or a guy who you can put on your penalty kill, but he is a guy who you can plant on the point or the left side of your powerplay and get quality shots from him. Apart from having elite goalscoring, Holtz also has underrated hands, and is a smart player. Holtz holds a statline of 9-7-16 in 25 games played this season, and has a PNHLe of 64. I would compare Holtz game to that of Mike Hoffman, an elite powerplay talent, and a lethal shot, both slapshot and wristshot.