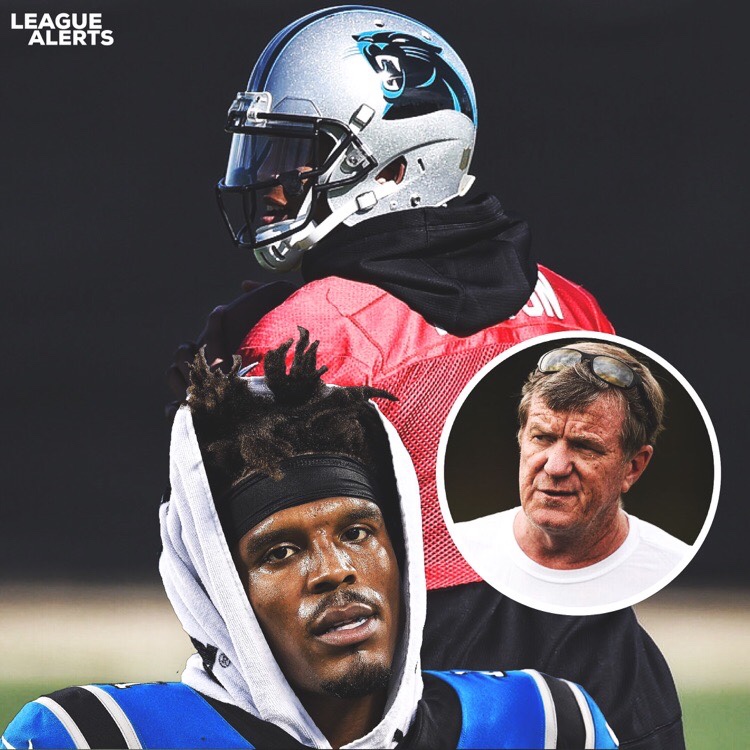 Newton would go on to comment under the Instagram post saying “ Please do not try to and play me, or manipulate the narrative and act like I wanted this; you forced me into this.”

The Panthers selected Newton with the first overall pick in the 2011 draft as he was the #1 ranked quarterback coming off an impressive year at Auburn winning the Heisman trophy. The Panthers planned for Newton to be their franchise quarterback of the future in hopes of bringing them their first Lombardi Trophy. On July 29, 2011, Newton signed his rookie contract with the Panthers a 4-year deal worth over $22 million that was fully guaranteed. Here is a timeline of Cam Newton’s career with the Carolina Panthers.

Newton was announced as the team’s starting quarterback before the start of the 2011 season which came to no surprise as all coaches were high on his play. Despite losing his NFL debut,
Newton threw for 422 yards completing 24 passes out of 37 attempts along with 2 touchdowns. Along with the impressive stat sheet, Newton broke Peyton Manning’s rookie record for the most passing yards on opening day while also becoming the first rookie quarterback to throw for 400+ yards in an NFL debut. By week 2 Newton already had 854 passing yards, breaking another NFL record held by Kurt Warner for the most throwing yards through the first two weeks of the season, but the Panthers would start the season with a record of 0-2. Although Newton was breaking records left and right he was tied for the most interceptions thrown by week 2 with 4 interceptions. Newton led the Panthers to a 6-10 record after going 2-14 the prior year while becoming the 4th rookie quarterback to pass for over 3,00 yards, landing himself his first pro-bowl appearance. Newton earned himself the AP Offensive Rookie of the Year award and Pepsi NFL Rookie of the Year beating top talent like Andy Dalton, Von Miller, Patrick Peterson, and Aldon Smith.

The Panthers 2013 season saw a huge improvement in their team led by no other than Cam Newton as he threw for 3,379 passing yards, 24 touchdowns, rushed for 585 rushing yards, 6 rushing touchdowns, and 13 interceptions. This was one of the best rushing stat lines by a quarterback since Michael Vick who is considered the best rushing quarterback to step foot on the field. Newton led the Panthers to a 12-4 record and to the playoffs for the first time since 2008 but would go on to lose in the Divisional Round 23-10 to the San Francisco 49ers. Newton was selected to his 2nd pro-bowl and would go on to be selected 3rd overall by Team Sanders and was ranked the 24th best player on the NFL Top 100 Players of 2014.

Heading into the 2014 season Newton underwent surgery to tighten up his ankle ligaments during the off-season. Newton admitted he was dealing with the problem since his days at Auburn, the surgery would cause Newton to miss training camp and the first preseason game. During the third game of the pre-season vs the New England Patriots, Newton suffered a hairline fracture on his ribs after a hit by Patriots linebacker Jamie Collins causing Newton’s streak of starting 48 consecutive games come to an end as the injury forced him to miss the season opener. Making his season debut Week 2 vs the Detroit Lion and looked like he didn’t miss a step throwing for 300 yards and a touchdown with a quarterback rating of 100.2 leading the Panthers to a 27-4 win. Newton would lead the Panthers to a record of 7-8-1 clinching the NFC South for the 2nd consecutive year the first time since the making of the division. Newton also joined Michael Vick and Randall Cunningham as the only quarterbacks in NFL history to with four seasons of at least 500 rushing yards and tied for 10th all-time in rushing touchdowns by a QB with 33. Newton led the Panthers to their first playoff win in nine years with a 27-16 victory over the Arizona Cardinal in the Wild Card Round throwing for 198 yards, 2 touchdowns, and 35 rushing yards. The Panthers would go on to lose in the Divisional Round to the Seattle Seahawks 31-17.

Newton earned himself a new contract extension in the off-season an extension of  5-years $103.8 million. By week 3 of the season, Newton recorded his 26th game with at least one thrown touchdown and one rushing touchdown ranking second all-time amongst quarterbacks. While leading the Panthers to their first 3-0 season since 2003 he accounted for 76% of the total offensive yards and 88% of the total touchdowns. In a week 8 matchup against the Green Bay Packers Newton completed 15-30 passes for 298 yards, 3 passing touchdowns, along with rushing for 57 and 1 rushing touchdown earning himself NFC Offensive Player of the Week, improving the Panthers record to 8-0 the best start in franchise history through 8 games. During a thriller, 38-25 win matchup against the New York Giants Newton threw for 340 yards, completing 25 of 45 passes, throwing 5 touchdowns, and rushing for 100 yards leading the Panthers to their 4th game-winning drive of the season and improving their record to a franchise-best 14-0. Newton was named the NFC Offensive Player of the Week making it the 4th time in a span of 7 weeks. The Panthers would go on to lose their first game of the season the following week to the Atlanta Falcons, a matchup where they lost by one possession with a score of 20-13, but followed up the next week with a 38-10 win against the Tampa Bay Buccaneers ending their season with a franchise-best of 15-1. Through 15 weeks Newton led the team to 14-0, ranking second for the most touchdowns thrown, led the NFL with 40 combined passing and rushing touchdowns, and took part in 72% of the Panthers total snaps. Finishing up the 2015 regular season with 3,837 passing yards, 35 touchdowns, a 59% completion percentage, rushing for 636 rushing yards, 10 rushing touchdowns earning himself his 3rd Pro-Bowl selection and first First-Team All-Pro.

Newton led the Panthers over the Seattle Seahawks with a 31-24 victory in the Divisional round throwing for 151 yards and 1 touchdown, but the Panthers almost let the win slip as they nearly blew a 31-0 lead. The Panthers would go on to destroy the Arizona Cardinals in the NFC Championship, a 49-15 victory where Newton completed 19 of 28 passes, throwing for 335 yards, 2 touchdowns, rushing for 47 yards, and 2 rushing touchdowns making the 49 points scored the highest in NFC Championship history. The Panthers were now headed to the SuperBowl for the second time in franchise history in hopes of winning their first Lombardi Trophy. On February 6, 2016, Newton was named the NFL MVP becoming the 1st panther in franchise history to win the award. Super Bowl 50 would feature the Panthers’ top-ranked offense against the Denver Broncos top-ranked defense; it turned out to be a battle between both teams’ defenses. Newton would fail to get his team a championship as the Panthers would go on to lose 24-10 Crowing the Broncos World Champions. Newton threw for 256 yards while completing 18 of 41 passes and led the team in rushing yards with 45 yards on 6 carries, the part that hurt the Panthers the most was Newton threw 1 interception along with fumbling twice, losing both with one resulting in a return for a touchdown.

After an impressive 2015 season, the Panthers looked like they would be heading back to the Super Bowl not with a 15-1 record again but as a powerhouse team with hopes of winning it all. The 2016 season opener was a Super Bowl 50 rematch with the Panthers vs the Broncos and it was the same results as the Super Bowl as the Broncos would go on to win 21-20. Newton threw for 195 yards, 1 touchdown, rushed for 1 touchdown, and threw 1 interception. The 2016 season would be nothing like the 2015 season as the Panthers would start off the season with a record of 1-5 and their playoff hopes looked slim to none. Newton did suffer a concussion week 4 vs the Atlanta Falcons causing him to miss half the game and the week 5 matchup against the New Orleans Saints. In week 14 vs the Seahawks Newton was benched for the first offensive series for violating the team dress code making it the first time since his first pre-season game he would come in the game as a backup. Newton had an off-year as he would have a completion percentage of 52.9% making it a career-worst, throwing for 19 touchdowns which were 16 fewer his previous season, and threw for 14 interceptions his worst since his rookie season. After a 15-1 season in 2015, the Panthers finished off the season with a 6-10 record and missed the playoffs.

On March 30, 2017, Newton underwent surgery to repair a partially torn rotator cuff on his throwing shoulder. Newton would go on to have a somewhat better season than the previous year as he threw for 3,302 passing yards which were 107 fewer yards than his 2016 and even though he threw 21 more completions than 2016. Newton led the Panthers to a record of 11-5 and had them back in the playoff picture, but they would go on to lose in the Wild Card against the Saints. Newton threw for 349 yards and 2 touchdowns.

The Panthers started off the 2018 season with a record of 6-2 and many fans felt as if the team got their swagger back. Newton led the Panthers back in week 7 after being down 17-0 to the Philadelphia Eagles, throwing for 201 yards and 2 touchdowns in the final quarter giving the Panthers a 21-17 win and was awarded the NFC Offensive Player of the Week. Things quickly went downhill as the Panthers would begin to go on a losing streak as Newton was dealing with a nagging shoulder injury. The Panthers started off 6-2 and finished the season with a record of 7-9 going 1-7 in the final 8 games of the season. Newton improved in every statistical category most notably his completion percentage of 67.9% a career-high.

Newton only played 2 games in 2019 as on November 5th he was placed on injured reserve with a Lisfranc fracture. It was unknown why the quarterback was out for week 3 until it was revealed in a Youtube Vlog by Newton that he had a Lisfranc fracture. The Panthers finished with a record of 5-11 as Kyle Allen replaced Newton as the starting quarterback. It was then reported the Panthers looked to move on from Newton, but then on March 17, 2020, news broke out that the Panthers gave Newton Permission to seek a trade one week later the team released Newton.

Newton will definitely go down as one of the greatest to ever play for the Carolina Panthers.