Kevin Ware: The Most Ugly Injury in Basketball History 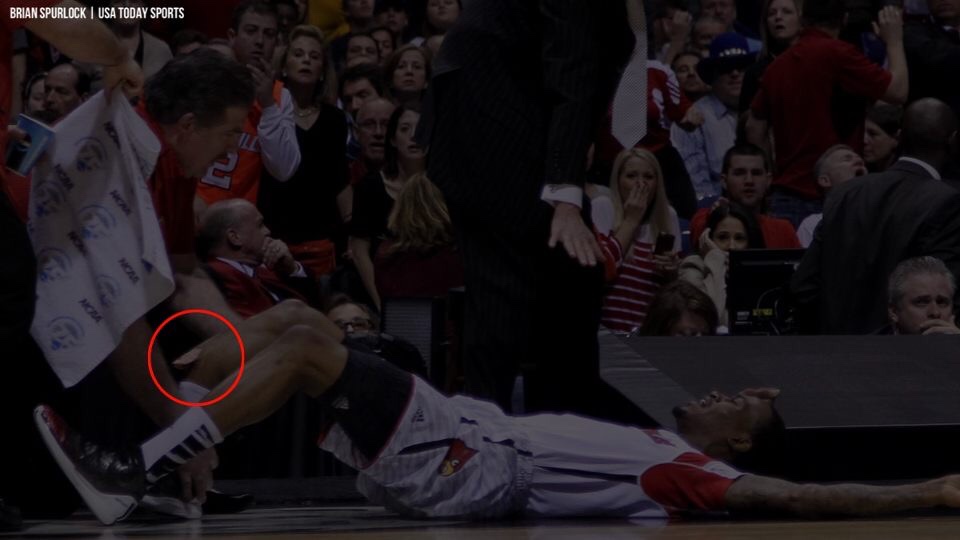 It’s April 1st 2013. The Elite Eight is underway and rival teams Duke and Louisville are playing for the Final Four.

Louisville is the #1 seed while Duke is the #2 in the Midwest Region. It was bound to be one of the most competitive games in NCAA history.

The game began and Louisville had a 21-17 lead with 6:40 to play in the first half. Marcus Thornton was open from three and took the shot. Louisville’s Kevin Ware went ran up to contest the shot when the injury happened.

On his way down, he misplaced his leg and it nearly snapped in two. Ware’s injury was a truly horrific sight. Marcus Thornton saw it and couldn’t bear it when he looked, immediately covering his eyes in shock.

Many people were discombobulated about how one’s leg could just snap like that. It had never been seen before in any circumstance, and hasn’t been seen since.

Many doctors believed that Ware’s Shin bone was already weaker than it should be, combined with the wear and tear from an entire season, the bone just couldn’t take it anymore.

A large part of how his bone snapped was his landing. When Ware jumped to contest the shot, he already began twisting himself while in mid-air, causing him to land funny. When he landed the way he did, the Shin bone snapped in two.

Although it was the most ugly injury in Basketball, it was far from the worst. Although many people thought Ware’s career was over after this injury, that wasn’t the case. The thing about his leg splitting open was that the injury was essentially a broken bone. A very disturbing looking broken bone, but a broken bone nonetheless.

When the Shin bone broke, there was nothing but skin essentially keeping it in the leg, which is why it stuck out. Although it looked like a really terrible injury, they essentially just needed to get the bone back in place and both the bone and skin would heal. It was essentially like breaking a leg or ankle. It sucks, but it won’t end one’s career.

Bones actually heal very well which is why most broken bones aren’t career enders. Players like Kawhi Leonard and Paul George have both broken bones, but are still some of the best players in the NBA.

They do still have to sit out for a while, though. Ware watched his team win the NCAA Championship against the Michigan Wolverines, but returned next season.

He played his first game against Pikeville and he nailed a triple when he entered the court. He played nine games that season for Louisville and then transferred to Georgia State where he played for two more seasons.