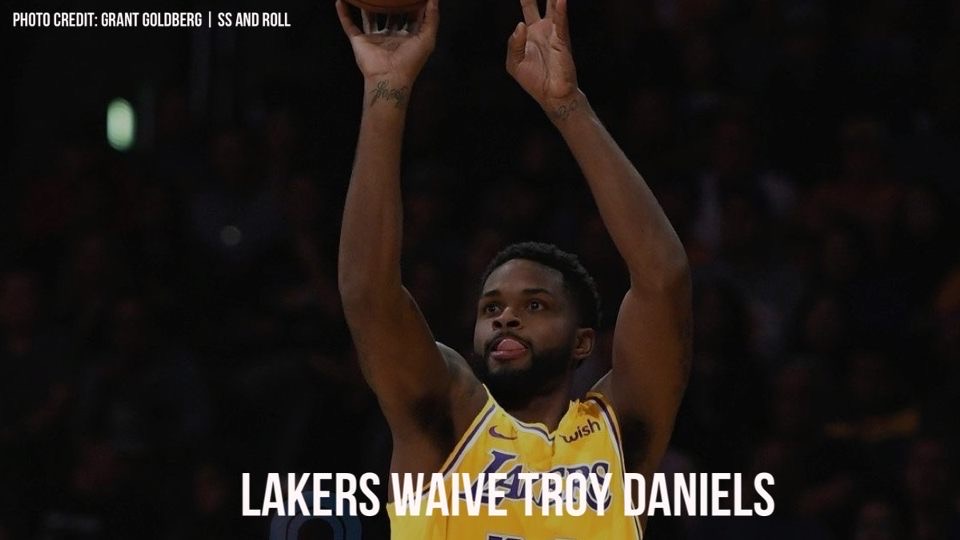 The Los Angeles Lakers just announced today that they would be waiving veteran shooting guard Troy Daniels. The 28 year old appeared in 41 games throughout the season with the Lakers, where he played just 11.1 minutes per game. Daniels averaged 4.1 points per game and 1.1 rebounds per game, as well as 39% field goal percentage to go along with 35% three point percentage.

Sadly for the Lakers, Daniels has not lived up to all they’d hoped he’d be. The defensive minded guard proved to be defensive exclusive, as his offensive game was limited to an inefficient three point shot. Daniels was helpful on defense, however the Lakers elected to give him very minimal playing time on their incredibly deep roster. Daniels will now be looking to sign with another contender, as the waiver deadline approaches today. No word on who is pursuing Daniels at this time.

In an interview with Lakers Nation last week, Daniels said this about potentially being traded:

For sure. No question. I mean people might say that he’s not —– and yeah but everybody says it’s a business, and when they say it’s a business it really IS a business. I’ve been traded five times in my career in the past seven years so I’m scarred for life. So whatever happens. I just think whatever happens is going to happen and when it does happen, just stay strong stay true to yourself and continue to work if it happens. Obviously we’ve been up and we’ve been down. That’s what teams do. You go up, you go down. You go up, you go down. But media and everybody speculating we need help with this, we need that.

According to Adrian Wojnarowski, the Lakers have have no imminent plans to add another player with the open roster spot. They will reportedly meet with Dion Waiters, and rumors of J.R. Smith and Lance Stephenson have been floating around, but now the Lakers can “react should an injury occur”. The Lakers have also contemplated the idea of adding another ball handling or play making guard at a later time. Wojnarowski says that Lakers GM Rob Pelinka plans to take his time with the open spot.

The Lakers certainly have their options open, as many players such as Dion Waiters, J.R. Smith, Lance Stephenson, Jordan McRae and Jamal Crawford remain unsigned at this point. There are more buyouts expected to be agreed upon as the deadline on Sunday looms, so the Lakers have plenty of time to make a choice. According to Pelinka’s comments however, it seems like Dion Waiters is the likely candidate.

This comes just days after the Lakers also waived DeMarcus Cousins, who will likely be out for the year, in favor of Markieff Morris, who agreed to a buyout with Detroit last week. Some have speculated that Cousins could take this open spot once again, but this seems highly unlikely due to his recent release. Cousins will remain with the team to rehab.

Any new information on the issue will be updated promptly.