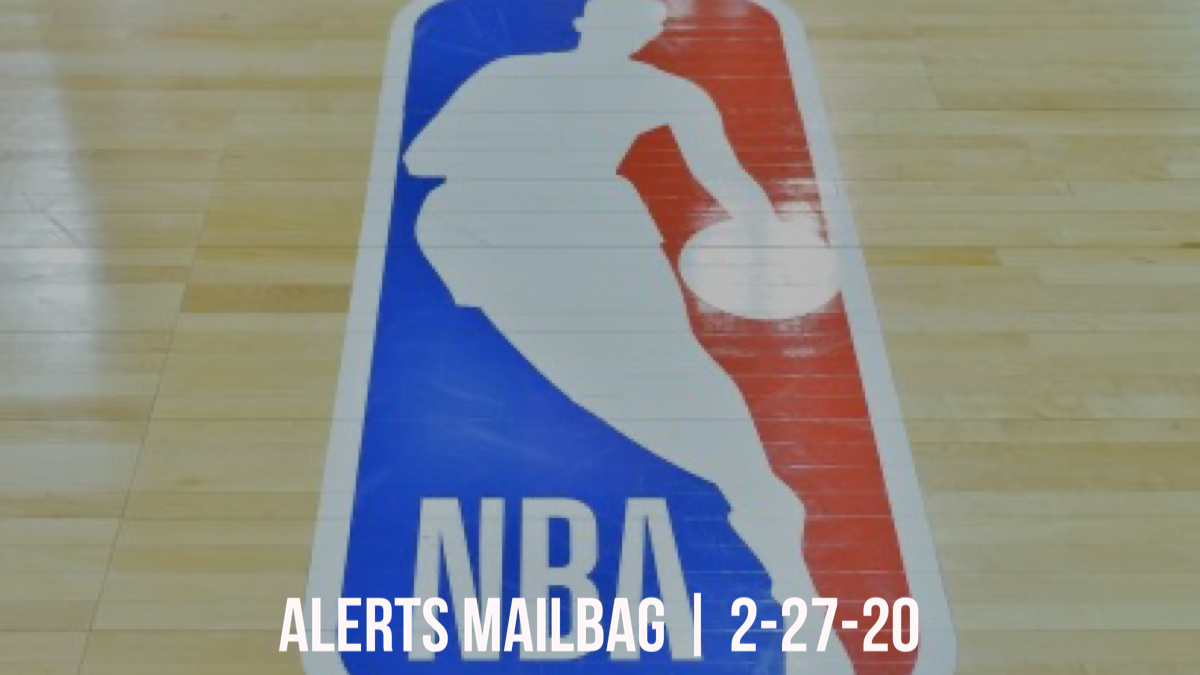 Your Leaguealerts Mailbag is going to keep you up to date on everything NBA. If you missed a game or didn’t hear about some major news, this is the place for you. This mailbag will be uploaded daily so that you can stay up to date on the NBA news!

Joel Embiid got fined $25,000 for flipping off Atlanta Hawks Shooting Guard, Kevin Huerter, in Philadelphia’s 129-112 victory. He later proceeded to curse on live TV saying “f–k it” during the post-game interview.

Third-year player, Royce O’Neale finally worked his way into Utah’s starting lineup. Joe Ingles will be moved to the bench, while Utah gets a boost defensively from O’Neale. This is a huge step for his career. The undrafted player from 2015 has really shown a great work ethic and it’s really paying off.

eBay took down a lot of items from the Kobe Bryant memorial. They claim that it is not in their policy to “profit off of human tragedy or suffering.”

The Charlotte Hornets emerged victoriously, winning 107-101 in Madison Square Garden. It was a competitive game that Terry Rozier played a major part in. Rozier put up 26 points on 7-15 from the floor and 4-7 from deep. He also pulled in three boards and four assists to add on to his scoring. Devonte Graham was another player who stood out. He scored 21 points on 7-18 shooting. Although he tends to be a great three-point shooter, he only shot 2-9 from deep today, mainly making two-pointers and free throws.

The New York Knicks were led by their Power Forward, Julius Randle. Randle scored 18 points on 7-14 shooting. He helped the Knicks stay in this game, along with 17 from Portis and 15 from Trier.

The 76ers lost in a shocker, but it wasn’t entirely sad. They lost Joel Embiid after suffering a shoulder injury during the game. Embiid only played eight minutes before going out. The game was led by Shake Milton who scored 20 points on 8-14 shooting and 4-6 from deep. He helped the 76ers not completely embarrass themselves thanks to him.

Washington pulled out a narrow victory against the Brooklyn Nets, taking the game 110-106, finally getting Bradley Beal a much-needed win. Beal put up 30 points, 5 rebounds, and 5 assists that game while shooting 11-24 from the field and 4-9 from deep. Rui Hachimura also had a good performance, scoring 17 points and pulled in 4 boards. He shot a consistent 6-10 from the field and made both of his three-point attempts. Bertans also scored 14 points.

The Nets fought hard, but it wasn’t enough to take on the wrath of Bradley Beal. Caris Levert had a great showing with 34 points, 7 assists, and 4 steals. He shot 10-20 from the field and 5-8 from deep. Other notable Nets were Dinwidde, 18, and DeAndre Jordan, 16,

The 17-40 Minnesota Timberwolves managed to pull out a nail-biter against the 36-22 Miami Heat. Led by recent acquisition, D’Angelo Russell, and without Karl Anthony-Towns, the Timmberwolves pulled an impressive win against one of the Eastern Conference’s best teams. D’Lo had a great game, scoring 27 points, along with 6 assists, 5 rebounds,a dn 3 steals. He shot 9-18 from the field and was on fire from deep, shooting 7-14. Another recent acquisition, Malik beasley, also had an impressive showing. He scored 21 points and added 6 rebounds and 5 assists. He shot 7-14 from the field and 3-9 from deep. Another noticeable T-Wolves were Hernangomes, 17.

The Heast were led by their rookie Point Guard, Kendrick Nunn. Nunn put up 24 points and 6 assists. He shot 9-19 from the field and 2-6 from deep. Nunn was a huge contributor to why the heat almost won this game in an offensive duel between him and Russell. Other noticeable Heat players were Adebayo, 22, Butler, 18, and Dragic, 16.

The #8 seeded Olrando Magic took out the Atlanta Hawks last night. The Magic are fighting to get that #7 that Brooklyn holds to play anyone but Milwaukee. They took the game 130-120 thanks to the scoring of Evan Fournier. Fournier has been having a career year and this game is no different. He scored 28 points, while also getting 5 assists, 4 rebounds, and 3 steals. He shot a fabulous 11-18 from the field and 2-7 from deep. Aaron Gordon also put on a show, scoring 25 points. He also got 10 rebounds, 6 assists, and 3 blocks. He shot 9-14 from the field and 3-4 from deep, looking like the Gordon we knew back in 2017. Other notable Magic players were Vucevic, 17, and Bamba, 15.

The Hawks put up a fight, but were no match. Their lack of defense has been their undoing their season and this game was all the same. Trae Young did manage to score 37 points and dished out 11 assists. He shot 10-27 from the field and 4-12 from deep. Collins also scored 26 points.

The Rockets and their small-ball has done it again. The mopped the floor with the Grizzlies in a 140-112 victory. Westbrook was the star of the show last night. He scored 33 points and added 9 rebounds, 8 assists, and 4 steals. He shot 15-24 from the field and actually made a three, shooting 1-2. Harden also scored a solid 30 points, along with 7 rebounds. He shot 9-16 from the field and 7-12 from deep. Austin Rivers was another notable Rocket, scoring 23 points off the bench.

The Grizzlies did what they could, but they were no match for Houston. Dillon Brooks put up 22 points, but it wasn’t anywhere near enough to take on the Rockets. He took a lot of shots to get there too, shooting 9-25, but a solid 4-10 from deep. Valanciunas also put up 16 points.

DeMar DeRozan led the way for the Spurs. He had 27 points, 9 assists, and 8 rebounds. He did the best he could, but without Aldridge playing, he just couldn’t do it against one of the better teams in the Western Conference.

The Clippers took out the Suns 102-92. Kawhi Leonard put up the stats in this one with 24 points, 14 rebounds, 5 assists, and 3 steals. He shot 7-17 from the field, but only 1-6 from deep. The reigning Finals MVP is looking to reclaim the honor for a third time. Leonard had the help from Marcus Morris Sr, who had 18 points and 5 rebounds on 6-14 shooting and 4-8 on three-pointers.

The Suns were led by DeAndre Ayton, who had 25 points, 17 rebounds, and 3 blocks. He shot 11-22 last night and attempted a three, which he missed. Ricky Rubio also had 18 points and 10 assists, making it a competitive game.

Utah fought hard against the Celtics, but the Celtics were firing on all cylinders and there was no stopping them. Donovan Mitchell had a 37-point showing along with 5 assists and 5 rebounds. He shot 15-32 from the field, but a meager 2-10 from deep. This was also the first time Utah tried a lineup with Royce O’Neale as the starter when fully healthy, while Joe Ingles moved to the bench. O’Neale had a good showing with 14 points on 4-7 shooting and 2-5 shooting from deep.

Come back tomorrow morning to get the latest update on the NBA news! Best of luck at work or in school!