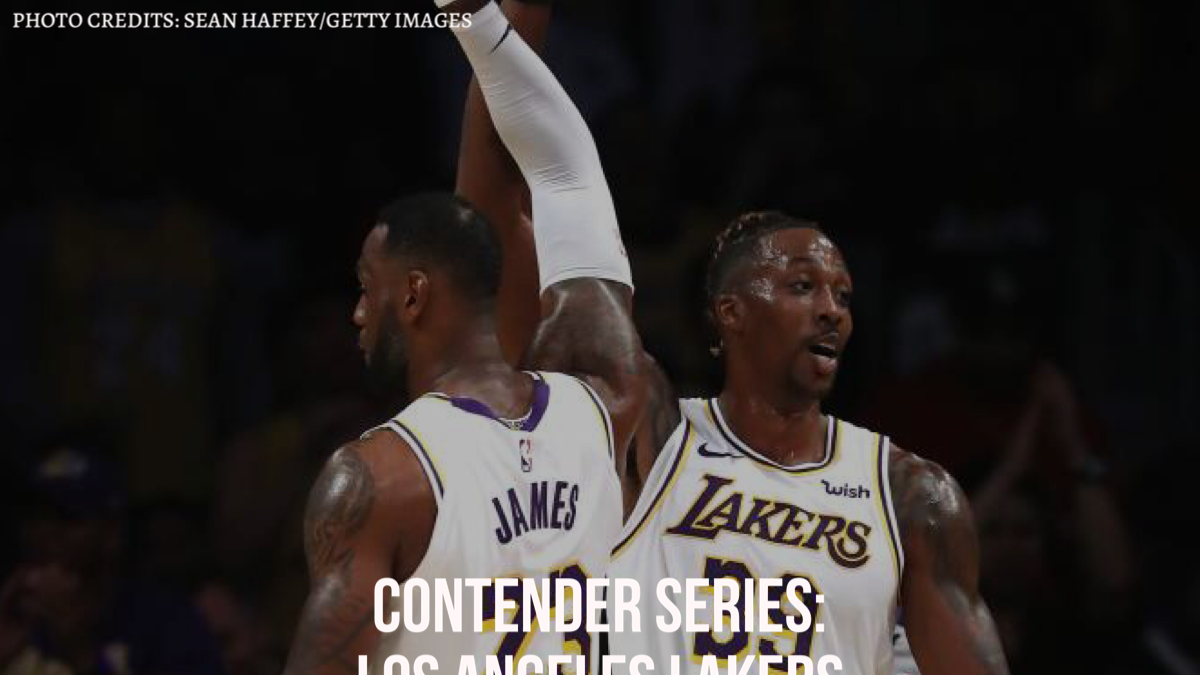 The Los Angeles Lakers. The birth of showtime. 16 championships and a multitude of hall of Famers walking in and out of the Staples Center doors. It’s evident that the Lakers have changed the landscape of the NBA. From Magic v. Bird to Shaq and Kobe, and now to LeBron and AD. This franchise just seems to be the gift that keeps on giving. Now, as we take a look into the present-day Lakers, we are posed with a question: is this team a title contender?

As always, the first place to look is at the guys who start and finish the game for a team: the starting lineup. The Lakers are led by none other than the king himself, LeBron James. Following LeBron, they have dominant big man Anthony Davis. Rounding out the starters are Avery Bradley, Danny Green and Javale Mcgee. This starting lineup is easily one of the best in the league. LeBron James and Anthony Davis are both having career years, the defense from Bradley and Green is suffocating, to say the least, and Javale Mcgee’s physicality just makes it that much harder to score. This team meshes perfectly, which gives them the advantage over a majority of the teams in the league.

Some notable names on the Lakers bench are Dwight Howard, Alex Caruso, Quin Cook, Jared Dudley, Kyle Kuzma, and Rajon Rondo. This bench pretty much has everything you want. From veterans with productivity like Dwight Howard and Rajon Rondo to young players who give the bench energy like Kyle Kuzma and Alex Caruso. This bench continues to help the Lakers win games and will be crucial come playoff time.

The Lakers have been on fire this year offensively. They are averaging around 115 points per game (FoxSports.com), which is good enough for the 7th most in the league. They are also shooting around 48% as a team on the year (FoxSports.com), which puts them at the number 1 spot in the NBA. Both LeBron James and Anthony Davis are averaging over 25 points per game. Along with this team’s offensive firepower, their defense proves time and time again to be just as good. The Lakers defense has held their opponents to 107 points per game (ESPN.com) and their opponents have only been shooting 45% against them (FoxSports.com). Just to add on to all of these things this team does well, they average 46 rebounds per game. It’s hard to look at these numbers and not immediately assume this team is a title contender, but of course, there’s always more to it.

Once again, we take a look at the “it” factor and question, do the Lakers have it? The short answer is yes. LeBron James has proved time and time again that he hones the ability to change the course of a game. Whether it’s a chase-down block or a game-winning shot, LeBron can will his team into a win. The other “it” factor on the Lakers is Anthony Davis. Although Davis has only been in the playoffs twice, without much success, he has proved himself over and over again. Davis has never had less than 20 points in a playoff game out of thirteen games. He also single-handedly led the Pelicans to 45 wins in the 2014-2015 season. There comes a point where a player is just simply too talented not to label an “it” factor, and Davis falls into this category.

Finally, we look into how the Lakers have done so far this season. The Lakers currently hold the 1st seed in the west with a record of 44-12. The Lakers have a 6 game lead on the 1st seed in the west which is extremely impressive considering how good the West is. The only thing concerning about their schedule so far has been their inability to beat the Los Angeles Clippers. Seemingly their top enemy in the west, the Lakers have not been able to beat the Clippers, losing by ten in the season opener and by seven later in the season. They’ve only played two games against each other, but if these games have any indication of what a series between the two would be like, the Lakers are in trouble.

Overall, the Los Angeles Lakers are clearly one of the best teams in the league. Their starting lineup is perfectly meshed, their bench has a little bit of everything and they have multiple “it” factors. So far this season, the Lakers have been near perfect, holding the 1st seed in the West by six games. This is insanely impressive considering how competitive the West is. Their only concern seems to be the rival team in LA, the Clippers. Since they’ve only played two regular-season games against each other, this hardly seems to be a problem as of right now, but it may be something to look out for. As of right now, the Lakers are the clear favorite in the West to make the finals, and I can’t disagree. This team certainly could be holding up their 17th championship trophy come finals time.