Joe Burrow: The Bengals have the first pick but i have leverage 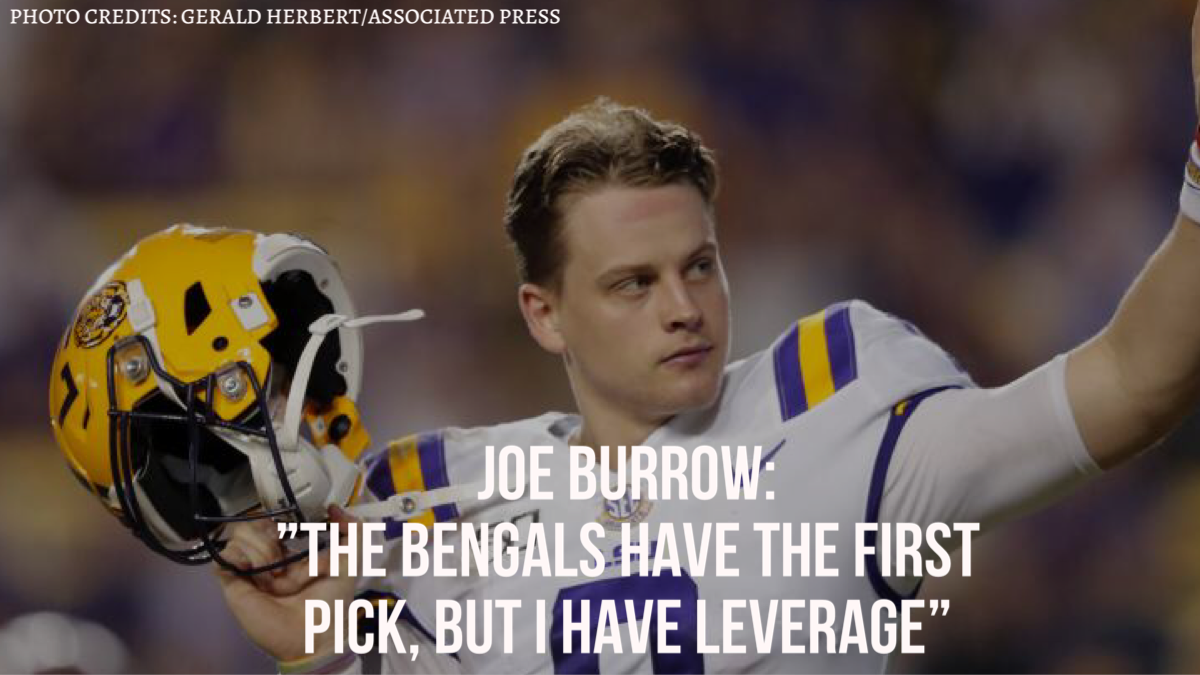 Eli Manning coming off a 10-3 record and leading the Rebels to an SBC Cotton Bowl win was the most talked-about quarterback entering the 2004 draft. The 4-12 Chargers held the 1st overall pick and had their eyes set on Manning to become the cornerstone to building up their franchise. Manning dropped a bomb when he announced that he would not play for the Chargers if they were to draft him. The Chargers would later on draft Manning with the 1st overall pick but agreed to trade him to the Giants for Philip Rivers, a 2004 3rd round pick ( PlaceKicker Nate Kaeding), a 2005 1st round pick (Linebacker Shawne Merriman) and a 2005 5th round pick. Manning signed a 6 year 45 million dollar deal where he would solidify his hall of fame worthy career with the Giants.

16 Years later, LSU quarterback Joe Burrow is coming off an amazing season where he won the Heisman trophy and led LSU to a National Championship. He is stuck in the same position as Manning. Last week former 1st overall pick Steve Bartkowski came out and said Burrow should pull an “Eli Manning” on the Bengals if he was to be drafted by them.

“The Bengals are not the best organization,” said Bartkowski during his talk with Burrow at an award reception

I know what it’s like to go to a bottom feeder team. I would hate to see that happen to him, to be honest

The Cincinnati Bengals had one of their worst seasons in franchise history this past season. Long time Bengals quarterback Andy Dalton had one of his worst years this past season with a completion percentage of 59.5% along with throwing only 16 touchdowns and 14 Interceptions. Dalton was also without his partner in crime, wide receiver A.J Green who tore a ligament in his ankle that would keep him out for the whole 2019 season. This past season has people questioning if it’s time to end the Daltons era with Cincinnati and look for a fresh start.

It is no secret the Bengals offensively are one of the worst offensive teams in the league, so could you really blame Burrow if he was to pull an “Eli Manning” and avoid playing for the Bengals?

Burrow may have his eyes on that option if necessary. “The Bengals have the 1st pick, but I have leverage,” said Burrow. Will history repeat itself and will Burrow find a way out of Cincinnati like how Manning did? I guess we will have to wait and see on Draft Day.

Joe Burrow is coming off an amazing season and it’s no secret the Bengals have their eyes set on drafting him with the 1st overall pick. For many Bengal fans, this is what they have been waiting for there chance at drafting a new franchise quarterback a chance at a new beginning. For Burrow, he will be going to a team that finished 30th in points scored per game, 26th in offensive yards per game, 19th in passing yards per game, 25th for rushing yards per game and an O-line that allowed 48 sacks. The Bengals may also be without their star wide receiver A.J Green (turns 32 in July) next season as he is a free agent this off-season and maybe looking to get paid somewhere else.