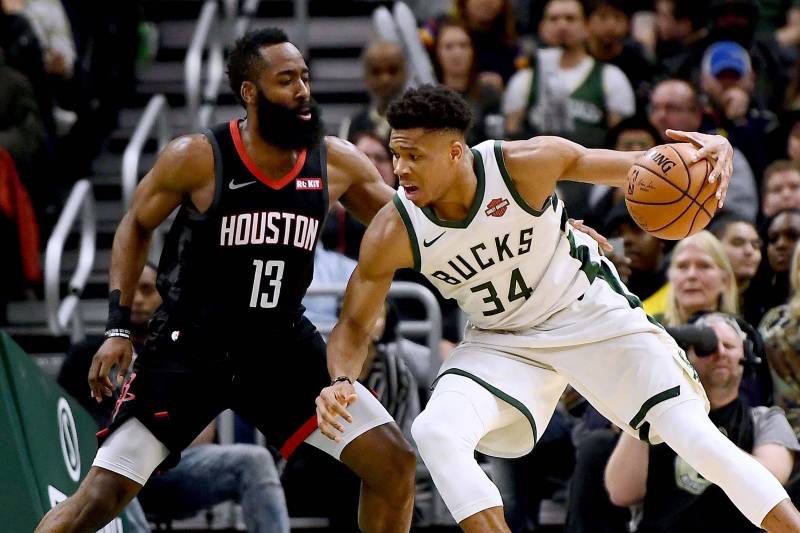 RECENT UPDATES ON THE BEEF BETWEEN GIANNIS AND JAMES HARDEN: CLICK HERE

This really all stems back to the MVP Award Race during the 2018-2019 NBA season. Giannis and Harden was a hot topic for debate among NBA fans. Harden had just come off his MVP season in 2017-2018, looking for a repeat, meanwhile, Giannis was looking to claim his first MVP. Eventually, Giannis Antetokounmpo was awarded the MVP, and Harden failed to repeat.

James Harden Interview with 97.9 The Box

On August 22, 2019, James Harden appeared as a special guest on Houston based radio station 97.9 The Box. This was James Harden’s first time publicly speaking out about losing the controversial MVP race. Harden claimed Giannis only won the MVP award because “the media, they create a narrative and run with it the entire year”. Harden is referring to the stat-padding, inefficient shooting label that often gets placed on him. Harden is often criticized for his shooting percentage. The narrative is also aimed at Giannis, as he is often credited for being the most dominant player in the league. In the interview, Harden obviously wanted to say a lot but caught himself before he could really get into it.

James Harden sat down with GQ for another interview on September 12, 2019. The interview opened up about questions regarding Russell Westbrook and eventually moved into the questions about the media narrative Harden spoke about in the interview with 97.9 The Box. Harden essentially said he had a historic season, and that despite that, the chatter was all about Giannis. The full question is below…

Interviewer: You spoke to a radio station in Houston recently about the MVP race, and how you feel like the media usually goes into the season with an MVP candidate in mind, a narrative, that helps them win that award. Do you think a narrative has already taken form for 2019-2020?

Harden: Nah, it hasn’t happened yet, it’s too early. Wait until the preseason and when the regular season starts up again. But they [the media] for sure got some teams they locked in on. We all know. That’s just what it is. You can’t tell me that a guy whose team was a 14-seed at one point last year, and ended up a four-seed with everything that was going on—so many injuries—and who went on a 32-game 30-point streak, eight 50-point games, two 60-point games in one season…and all the talk was about [Giannis Antetokounmpo]? There’s no way.

I just had to look at what I could do to get better for next year. You can’t pout or be mad, and the kid had an unbelievable season, so did his team. But the things I was putting up were legendary. You going to look back in 10, 15 years from now and be like, is that really true? Did that really happen? That’s some stuff they were doing back when Kareem and all those other guys were playing. But I’m happy. We have a team goal of winning a championship, and I’m ready to get going now.

Giannis Antetokounmpo and LeBron James were named All-Star Captains and had to choose their teammates out of a draft pool, like last year.

This year, Giannis Antetokounmpo made some rather interesting decisions for some controversial reasons. While selecting starters, three guards were left on the board which included Kemba Walker, Trae Young, and of course James Harden.

Despite Antetokounmpo’s comments, Harden would go on to lead team Lebron in assists during the all-star game (6), along with a win over team Giannis.