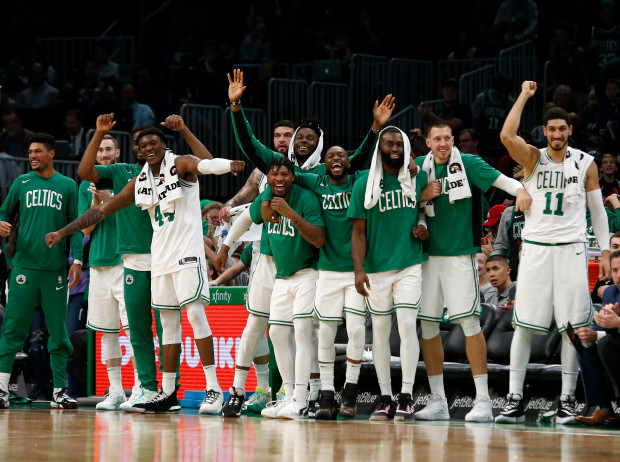 The Boston Celtics have been surprising everyone this season. With the improvements of Tatum and Brown, along with Kyrie’s replacement in Kemba Wallker have proven to be a great trio offensively, and their chemistry is one of the key factors to Boston’s success. The necessities of a good locker room have proven to be just as important as having talent on a roster as proven by Kyrie Irving’s fiasco in Boston. After Kyrie left in the 2019 offseason, Boston replaced him with the likes of Kemba Walker. Walker isn’t as good skillfully as Kyrie, but he is a much better teammate so the replacement for their point guard is there. They also lost Al Horford to the Philadelphia 76ers. Unlike with their Point Guard, they were not able to receive a replacement of the same level. They signed Enes Kanter to a two-year, $9.8M contract and already had Daniel Theis and Robert Williams III on the roster. Although all of them are solid Centers, none of them can be the starting Centers on a championship team. Boston has shown that they’ve got championship aspirations for this year and are one piece away from going from pretenders to contenders. Here are three trade options for the Boston Celtics to take a leap for this season:

Andre Drummond is a two-time all-star who will likely get that honor again this year. (Speaking of the all-star game they should have a team of #8s play a team of #24s to honor Kobe Bryant) He is the best rebounder in the NBA and has shown great improvements in is ball-handling and passing. Andre Drummond isn’t a first or second-option on a contending team but he is a great presence in the paint and for a team with a lot of talent to surround him with (i.e: literally any team besides the Pistons). A trade for the 26 year-old big man could look something like this:

Detroit would receive a couple young assets and Gordon Hayward for Drummond. Both Grant and Robert were having solid seasons. Unfortunately for Robert, he has been sidelined with an injury, but should return sometime in early February . He is only 22 years-old with plenty of upside as he is a very consistent player inside, shooting 67.3%. He was averaging 3.9 points and 4.6 rebounds in only 14.2 minutes. He likely won’t be anything special, but still could be a solid starting-caliber Center, especially with coach Dwayne Casey, who specializes in player development. Detroit also receives rookie Grant Williams. He is a 6’6 Power Forward. Williams is having a solid rookie season, getting 3.3 points per game on 38.6% shooting. That isn’t impressive but he is hitting 50% on his two-pointers. He is also getting 2.4 rebounds and an assist a game. Along with their young assets, Gordon Hayward is having a great resurgence this season. He would be very useful at the three for Detroit as that is a gaping hole for them. Hayward plays similarly to Sekou Doumbouya and would be a great mentor for him.

Boston receives Andre Drummond as the main staple of the trade (obviously). Boston would fill the hole that they have at Center with the best rebounder in the league. Drummond is a much better fit with Boston as they have really good wings and Drummond has never played with a point guard as good as Kemba Walker. Pick-and-Rolls with Drummond and Kemba would be deadly. Boston would then have another all-star on the team to help carry the load. With the loss of Hayward, though, they’d need to get another Power Forward. Marieff Morris is having a nice recovery season after his injury-plagued season last year. This year, he is having the best year from beyond the arc, shooting 40.4% on over four attempts per game. He has proven to be valuable in today’s NBA and would replace Hayward in the starting lineup, or Daniel Theis could start at the four. Either way, Morris would have quite the role with Boston and they would be in contention for a championship.

The San Antonio Spurs have been shopping DeMar DeRozan and LaMarcus Aldridge all season. Aldridge would be a great fit with the Boston Celtics as a stretch-five. He is still a potential all-star averaging 19.3 points on 51% from the field and an impressive 42.7% from three on nearly three attempts per game. He’s also putting up 7.4 rebounds and 2.4 assists. On the defensive end he is averaging almost two blocks per game. He does it all as a Center and would be a much more threatening defensive presence than Enes Kanter or a 6’8 Daniel Theis.

DeMar DeRozan has also been involved in lots of trade rumors. The 30 year-old all-star is averaging 22.6 points per game on 53.6% shooting. He is having one of the best seasons of his career with San Antonio and has a lot of intrigue with a lot of teams. He’s also pulling 5.6 boards and 5.2 assists. He is also grabbing 1.1 steals on the defensive end. A trade for the two Spurs stars could look like this:

The San Antonio Spurs will get a boost to their rebuild. Along with Gordon Hayward, they receive a lot of young players that will be a great help to them in the future. Marcus Smart is one of the best hustlers in the NBA and would thrive with a coach like Gregg Popovich. They also receive rookie lottery-pick Romeo Langford. He has had a disappointing rookie season so far, averaging only 10.6 points per game in the G-League. His trade value is not as high as many would think and does not have the value of a true lottery pick. Along with those two, the receive 22 year-old Center, Robert Williams. Although recently injured, he has shown potential to be a solid Center in the NBA. He hasn’t been averaging many points, only 3.9, but he has been doing it on 67.3% shooting. He is also averaging 4.6 rebounds and showed that he’s capable of playmaking, dishing out just more than one assist per game. He would backup Jakob Poeltl who would finally get a chance to start with Aldridge out of the picture. Poeltl may even have a breakout season. Likely not, but only one way to find out with the 24 year-old. Along with those players, Memphis’s First Round pick will more than likely be a pick that they keep. Ja Morant and the Grizzlies have been on fire recently and the pick may not end up being a lottery pick at all. Even if it isn’t, the Spurs acquire four young assets along with Gordon Hayward as the veteran of the team. This trade has the potential to make the Spurs very dangerous in a few years.

Boston, on the other hand, receives Championship level talent. Although Boston fans love Marcus Smart, they would likely get over it if their starting roster consists of Walker, Brown, DeRozan, Tatum and Aldridge. That starting five would be one of the most dangerous in the NBA and would give the Bucks a run for their money in the East. They’d also be able to compete with the two powerhouses in Los Angeles. Many Boston fans may worry that this would bring back their issue last year of having too much talent, but with Kemba Walker is their leader instead of Kyrie, it will probably be a different story. Kemba is great or a locker room and will help them get passed that issue and keep them focused on that title.

Holmes is quietly having a very solid season with the Sacramento Kings. Although Holmes is having a good season, the Kings have not. They are currently sitting third-lowest in the Western Conference with very little hope in reaching the playoffs. Because of this, they are going to want to acquire some assets to surround De’Aaron Fox and Buddy Hield. Holmes has been averaging 13.1 points per game on 66% shooting. He has proven to be a great all-around player grabbing 8.5 rebounds, dishing an assist per game, while on the defensive end, deflecting 1.4 blocks and grabbing 1.1 steals per game. A trade for the surprisingly solid big man could look something like this:

Sacramento will receive a few young players for their starting Center. Semi Ojeleye and Daniel Theis are 25 and 27 respectively. They’re both on very team-friendly deals and are useful players to any team. The main staple of this trade is Milwaukee’s pick. The pick would be a late First-Round pick, likely in the early 20s, but they’d still get a nice, young prospect for their future. Sacramento doesn’t get a great haul and maybe Boston should throw in a Second Round pick as well, but this is about what Holmes is worth on the market.

Boston receives one of the most underrated Centers in the league. Holmes has been playing very well this year and in a Big Market like Boston, he may be able to thrive in the spotlight. Holmes would be a huge help for their inside game as he is one of the better defensive players in the league. He is a great all-around player and is the perfect fit for a Boston team with four great scorers and three-point shooters. Holmes would be one of the most interesting trades of the deadline because not that many people know who he is and could really make a name for himself starting in Boston.

These three trades are all possibilities for the Boston Celtics to go from Pretenders to Contenders. Boston is one of the most fun teams in the league to watch and if they could just get that starting-caliber Center, they would be a team to discuss in Championship talks. Boston as all the potential in the world and countless trade assets. Be ready for the team to make a move at the deadline. They are going to trade for a Center at the deadline. Which one is it? Only time will tell.