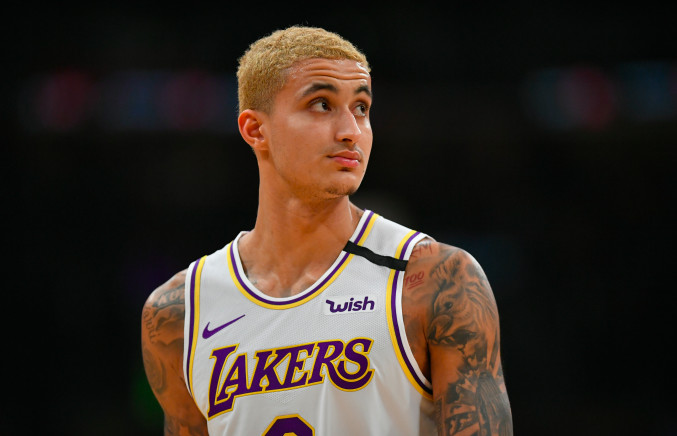 Kyle Kuzma being reportedly targeted by the Sacramento Kings has a lot of people thinking. Kuzma certainly hasn’t gotten the success he had hoped for prior to this season, and he now sits on the Lakers bench buried among the superstar talent and average- somehow starting – role players. The bench is hardly the place for someone of Kyle Kuzma’s skill and talent. So it makes complete sense for the Lakers to trade him for another key piece. Laker Nation would love a third superstar to pair with Lebron and AD and would willingly sacrifice the blonde lamb Kyle Kuzma for any starting caliber shooting guard or small forward. Kuzma quite simply is the odd man out, and it’s time for the Lakers to part ways with the young power forward, and allow him to seek out other opportunities on teams where he’ll get a real shot to prove himself.

So, if the Lakers are trading Kyle Kuzma before the February deadline, where will he go? Will the Lakers look for a rebuilding team with some oddly placed assets that they could use, or a contending team seeking a back up plan. The truth is, nobody knows. Not even LeGM. But we can certainly speculate at a variety of destinations around the league that would be willing to part ways with a valuable asset to scoop up to potential superstar talent in Kyle Kuzma.

Here’s a few destinations I find realistic for Kyle Kuzma, if Lebr- I mean the Lakers decide to move him.

Orlando has been a borderline playoff team for some time now. Led by Nikola Vucevic and Evan Fournier, the Magic supporting cast is much stronger than most would like to admit. Markelle Fultz, Aaron Gordon and D.J. Augustine are all great role players for the Magic. What the Magic really could use is a forward who can shoot, and score consistently, while also staying young. Not many players around the league fit this mold, and are available on the trade market. Orlando and Kuzma makes perfect sense. Kyle Kuzma would have an opportunity to be the first option on the Magic, and really be able to flourish on a young, yet competitive team. Either Gordon or Kuzma could step down into the SF position while Jonathan Isaac remains sidelined, or the Magic could move towards positionless basketball as many teams already have. As for what the Lakers might want from Orlando… The Lakers certainly have their pick with a deep Magic team. The Lakers could easily grab a few draft picks, plus a few young players. Potentially Mo Bamba or even the aforementioned Aaron Gordon. With a healthy Jonathan Isaac back on the roster, the Lakers would likely be interested in a swap where they could grab another solid young forward.

The Kings have already reached out to the Lakers about Kyle Kuzma, so it makes perfect sense that the Kings make the cut. Sacramento is a team that has experienced lots of failure to start the season, but they refuse to allow more tanking. The Kings, despite their constant loses, refuse to give up. Kyle Kuzma could be the perfect fit. Kuzma fits the young scoring build that the Kings have constructed. Grouped with Buddy Hield, De’Aaron Fox, Richaun Holmes, Nemanja Bjelica, the Kings could finally start winning games and make their first playoff series in years. The Kings likely would have to part ways with some valuable assets. This includes the risk of giving up at least a first round pick, which could pay off long term for the Lakers. The Kings consistently find themselves in the lottery, despite their recent efforts to make a playoff push. The Lakers could be interested in some young players like Harry Giles III, Justin James, Kyle Guy, or maybe some vets like Cory Joseph, Trevor Ariza or even Harrison Barnes.

The Pistons, much like the previous teams on this list are stuck in between the playoffs and top 10 pick zone. A rough place to stand, especially for a team with few stocked assets for the future. The Pistons have shown no signs of going up, and continue to drop crucial games as the playoff race tightens up. Kyle Kuzma could be used to start a rebuild in Detroit. This trade looks to be the most likely in terms of blockbuster trades. The Lakers could probably acquire one of the Pistons main players if they packaged Kuzma with some of their plentiful assets. Andre Drummond, Blake Griffin and Derrick Rose could all be in question here. Particularly Andre Drummond. The Lakers could add even more size and improve their already solid rebounding. Kuzma on Detroit would be rather pointless at first, however if Detroit plays their cards right, Kuzma could be the pioneer of a rebuild in the Motor City.

The Thunder have shocked everyone this year, and are looking like a legitimate playoff team. Their only gap in the roster, is at forward. Danillo Gallinari is currently injured, however when he returns, the competing Thunder still have a gap currently being filled by either Terrance Ferguson or Darius Bazley. Neither of these two are going to be able to match the impact Kyle Kuzma could have on the Thunder. Either of those two players could be on the move if the Lakers were to send Kuzma to OKC. Hamidou Diallo and Nerlens Noel could also fit the Lakers bill. The Thunder are going to be looking for more wing scoring this trade deadline, whether or not that is Kuzma is to be told. For now there are probably no better fits for the Thunder on paper. Kuzma fits the rebuild status of the Thunder at this time, yet he can still help the Thunder shock the world one game at a time.

Suns fans are drooling at the thought of Kyle Kuzma. When you talk to Suns fans about what their roster needs, they will say one of two things; an elite young power forward, and Kyle Kuzma. Kuzma very well could be the final piece to the puzzle in the Suns extensive rebuild, and give Devin Booker a reason not to run as fast as he can out of Phoenix. The Suns have seen some improvement this season, but it still hasn’t been enough. Their superstar Devin Booker is obviously unhappy about their lack of playoff appearances, and Kyle Kuzma could be a great tool to help Booker reach his goal. Kuzma would be a great fit for the Suns, who need shooting, and win presence in general. Aron Baynes to the bench is absolutely necessary for the Suns if that’s what it takes to get Kuzma. A few players the Lakers might be interested in could be Dario Saric or Frank Kaminsky, both of whom are playing very well for their minutes, but could certainly make more of an impact on a team where they see more playing time.

The Pacers are currently just a 6 seed in the East, however Victor Oladipo’s highly anticipated return is just 3 weeks away. The Pacers will have a great opportunity to really surprise people at full health this season. Kyle Kuzma could be another great piece that could help the Pacers escape playoff mediocrity as they seek to take down one of the top seeds whether that be Miami, Toronto or Philadelphia in the playoffs. The truth is, the Pacers don’t necessarily need Kyle Kuzma. They are set of pretty well with Malcolm Brogdon, Jeremy Lamb, TJ Warren, Domantas Sabonis and Myles Turner. However, Jeremy Lamb hitting the bench, or even the trade block in favor of Kyle Kuzma could perhaps help Indiana reach the next level. The Lakers would certainly be interested in someone like Jeremy Lamb, or one of the many solid role player for Indiana like T.J. Leaf or Aaron Holiday. Lamb seems to be the piece of most interest for the Lakers, who would appreciate his shooting at the guard position, which is the Lakers only flaw this season, as Danny Green struggles with his jumper and the other guards specializing in non-shooting skills.

I know this isn’t what you wanted to see, and honestly, it probably won’t happen. The Lakers would be dumb to trade Kyle Kuzma to their rivals down the road. But… what if. The Clippers need big men bad. With just Montrezl Harrell on the bench, the Clippers lack interior presence and big man scoring, which is going to be crucial if they plan on defeating their local rivals. The Clippers are currently starting Patrick Patterson and Ivica Zubac at the 4 and 5. This just isn’t good enough to stop the Lakers. Kyle Kuzma would be a great insert into the Clippers starting lineup. Is Patrick Patterson enough? The answer is simple. The Clippers need to do their due diligence in contacting the Lakers about Kuzma. I would be shocked and startled if the Lakers did send Kuzma to the Clippers, but it would be a great fit for the deadly Clippers.

So where do you guys think Kyle Kuzma is going? Or is Kyle Kuzma going anywhere at all? Wherever Kuzma ends up, he will certainly be an extremely valuable asset. For now, Kuzma can only keep proving his worth to the Lakers, and to teams inquiring about him. One thing is for sure, this trade deadline is sure to be dramatic.