LAS VEGAS — LeBron James has an impressive streak on the line that is presumably coming to an end late in the season. And it will likely come to pass because of a decision made three months ago, relocating to the same conference as the Golden State warriors.

The Los Angeles Lakers superstar has advanced to the NBA Finals for eight consecutive seasons, which is the best mark for a non-Celtic in league history. For nearly a decade in the Eastern Conference, his athletic prowess and immense skill have been on display in June.

Wednesday after a preseason clash with the very team that has eliminated him three out of the last four NBA Finals, James told Yahoo Sports that he was never opposed to joining the highly competitive Western Conference in an era dominated by those Warriors.

In fact, the 14-time All-Star said the Warriors didn’t factor into his free-agency decision-making process and neither did his Finals streak.

“Nah, that was never a thought,” James told Yahoo Sports after posting 15 points, 10 rebounds and five assists in 18 minutes in a 123-113 victory over the back-to-back champs at T-Mobile Arena. “I don’t really buy into [defeat]. I feel like with me on the floor, I can compete versus anybody individually. But at the end of the day, in order to win, your teams have to be great. Individuals are very great, but in order to win a championship, you have to have great teams.”

During locker-room pregame availability, James gave off an air of midseason focus as he sat silent at his locker stall, zoned out with his headphones on.

His back was to the media contingent hovered around. A few videographers and photographers attempted to snag a clean shot near the right side of his stall, but James kindly asked them to give him his space and they dispersed.

James was setting the tone before facing Stephen Curry and Kevin Durant.

On the court, James was spry as ever, moving without the ball and racing up the court in the team’s accelerated pace offense. It was an intense, competitive contest in the sold-out arena.

“It was a preseason game,” said Warriors guard Klay Thompson, “but it didn’t feel like it.”

On a squad filled with youngsters and promise mixed with savvy veterans, James understands that in the immediate future they are no match for the Warriors and probably no match for the other top teams in the conference.

But still, no matter the challenge, James is still looking to plow through the competition.

“I would never get into [an East-West] conversation like that,” James told Yahoo Sports. “‘Oh, he’s competitive in the East, but [the West is different].’ I’m well respected by my peers and that’s all that matters. I’m going to be as patient as I can be. I know I got a young squad, but these guys are willing to learn and I’m willing to learn with them.” 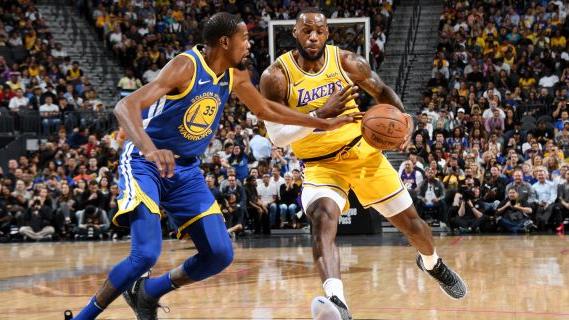