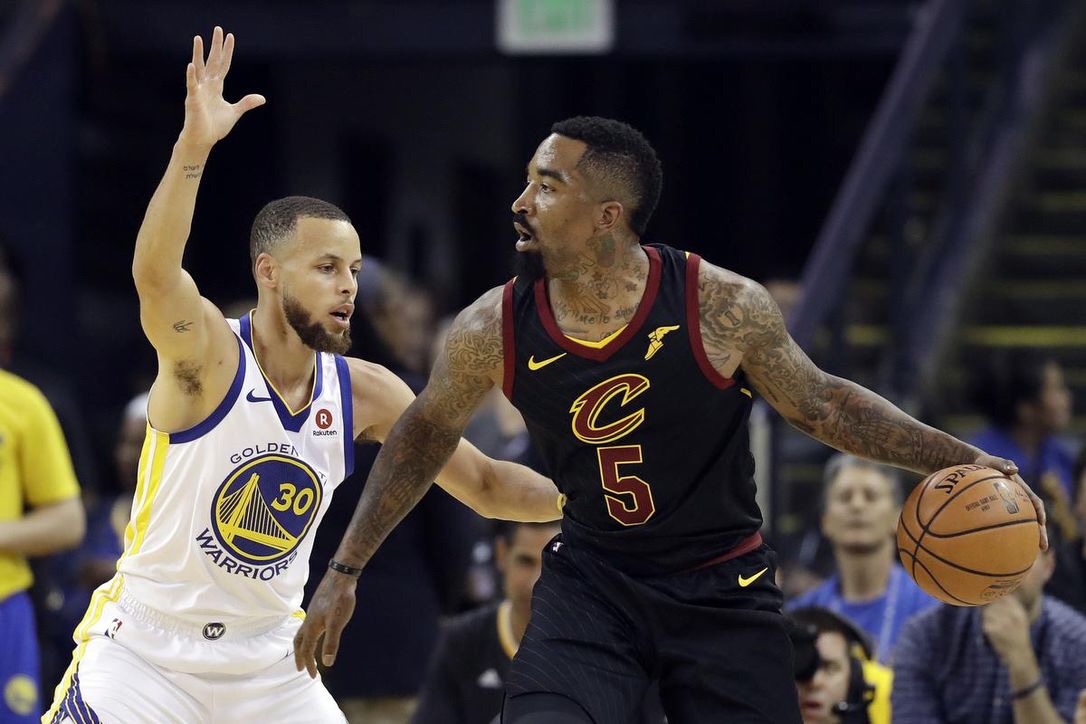 After a couple of months of relative quiet, the NBA is stepping back into the spotlight, as teams open their training camps. Later this week, pre-season games kick off, marking the first time full teams will be in action since June’s Finals.

One player who wouldn’t be blamed for relishing a chance to put some distance between himself and those Finals is J.R. Smith. That’s because he was responsible for the most memorable sequence of that series, in which the Golden State Warriors swept his Cleveland Cavaliers, when he committed a mental blunder at the end of regulation in Game 1.

Actually, that’s putting it mildly, as his brain-cramp quickly went down as one of the biggest gaffes in recent sports history. Just to quickly recap, he had a chance to help his underdog Cavs steal the opening game when he grabbed an offensive rebound with seconds left, but instead of putting a shot up, he dribbled away from the basket as time ran out.

That led to an instant meme, when then-teammate LeBron James displayed just how very exasperated he was with Smith, and Cleveland would go on to lose in overtime, never to come that close again to taking a game from the defending champions. Despite becoming something of a national laughingstock in the wake of that moment, though, Smith said recently that he was keeping it very much in perspective.

“It was tough, but it was the same after Game 2, 3 and 4. I didn’t take it no harder than those losses just because I made a mistake,” Smith, 33, told The Undefeated’s Jesse Washington in a story published Tuesday.

“We all make mistakes.

“For my teammates to know that and have my back, [Game 1] wasn’t that bad. Talked to my coaches, everybody stood behind me 100 per cent.“

Smith acknowledged that he erred by failing to “shoot the ball,” but he asserted that if he hadn’t gotten the rebound in the first place, or if he had taken a shot but missed, then his team “would have been in the same situation.”

“I mean, it’s an honest mistake,” he added. “People make mistakes all the time.”

For many NBA fans, arguably the least stunning aspect of the sequence was that Smith had a central role, as he had long since earned a reputation as something of a knucklehead. Over a 14-year career, including stops in New Orleans, Denver and New York, Smith had shown an occasional lack of awareness of game situations, including a 2016 incident in which he went over to the bench area to greet an opponent, allowing the player he was supposed to be guarding to waltz to the basket for an uncontested dunk.

At other points, Smith saw fit to untie opponents’ shoelaces during games, and he sparked a slew of jokes in March after news emerged that he had thrown a bowl of soup at a Cleveland assistant coach. Other episodes, though, have not been as amusing, including accusations of violent and/or destructive behaviour at nightclubs, and a 2007 incident in which his aggressive driving resulted in an accident that led to the death of a close friend.