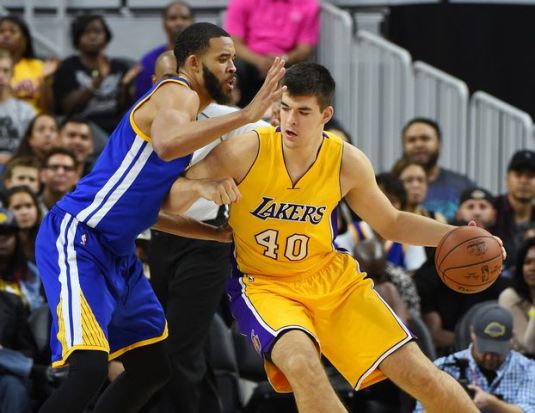 The signing of Lebron James still sits fresh in the minds of most Laker fans, but as the dust finally settles in Los Angeles, many questions about the newly formed team are beginning to arise. One of the biggest questions is, who are they going to play in the paint?

From the great George Mikan to Wilt Chamberlain, Kareem Abdul-Jabbar, and Shaquille O’Neal, the Lakeshow have had their fair share of dominance in the paint. Almost a decade after Shaq left LA, and a few years after their most recent championship, the Lakers began their infamous rebuild. After many draft picks, the 2017-2018 season was the best in five years, and despite missing the playoffs, the franchise set themselves up for one of their biggest summers since the rebuild began. Their progress seemed to entice many veterans, as star player Lebron James left Cleveland to sign a four year contract with LA. Many other moves continued to add depth and strength to the already existing young core, but one position was not as tended to as the others. The center position, reserved for the classic big man, was just about ignored this summer, leaving the Lakers with only three true ‘5’s’ left on the roster.

While they upgraded practically every other position, the focus on the paint presence was left in the backburner. One of their first moves of the summer was waiving rookie center Thomas Bryant, which came as a surprise to most hardore fans. Despite his extreme lack of NBA playing time last season, the 42nd overall pick impressed not only in summer league, but also in the G-League. On assignment with the South Bay Lakers, he averaged 19.7 points and 7.4 rebound per game, earning himself an All G-League First Team selection. While the decision was seen as a one intended to open cap for Lebron, it was still a very impulsive move on behalf of the front office. The young man who seemed to be a steal for the Lakers was soon on his way to the Wizards, and it will only be a matter of time until LA’s high risk-low reward move comes back to bite.

The Lakers ended the season with two strong bigs in the front court. After shipping away Larry Nance Jr. at the mid-season trade deadline, LA was left with Brook Lopez and Julius Randle as their presence in the paint. Lopez held the center position while Randle mainly played power forward. Randle, who was a first round draft pick by the Lakers back in 2014, was a restricted free agent. A breakout season did not go unnoticed for Randle, as both fans and teams took note. While the intentions of the team were to resign him, they eventually let him sign with the New Orleans Pelicans on a two year deal worth 18 million, which LA could have definitely afforded. The true reason why a deal never took place may never be known, as rumors are that Randle himself asked the Lakers to release their hold on his rights. Lopez on the other hand was not restricted. While he expressed that he would not mind resigning with the Lakers, the feeling was not mutual. No reports of an offer ever came out, and Lopez ended up signing a one year deal with the Milwaukee Bucks. The loss of both these players will not go unnoticed next season as Randle’s athleticism and Brook’s structure will be difficult to match.

Despite losing three centers over the offseason, the Lakers did add two others to the roster: one through the draft and one through free agency. Moritz Wagner, the 25th overall pick in the 2018 draft, was taken by the Lakers first round. While unproven, the big man came out of a strong Michigan program, and seems to be a promising addition to the young core. Despite getting injured in summer league, his first couple games showed that he can grow to be an outstanding player. Along with drafting Wagner, the Lakers signed two time champion JaVale McGee to a one year deal. While this move was met with some confusion, it ultimately added a player with a high basketball IQ to the roster and a veteran with championship experience to the locker room. While he is not known for his range, he boasts a field goal percentage above 60%, and contributed greatly to the Warriors last season despite his limited minutes. These two players join Ivica Zubac, who was drafted with the 32nd overall pick in the 2016 NBA Draft. The big man, listed at 7′ 1″ and 256 lb, was little known to the NBA world when his name was called. However, he made a big splash in summer league and earned the nickname ‘Zublocka’. His first season was outstanding as he was put into the starting lineup right after a stint in the G-League. He averaged 7.5 ppg and 4.5 rpg in only 16 minutes per game. What was supposed to be a breakout year last season started with Zubac showing up to his second summer league out of shape, which led him to the end of the Lakers bench, and eventually spending time in the G-League as a second year player. At the end of the season, he came in as part of the second unit, showing signs of his true abilities. It is obvious that the front office believes in the Croatian national as they picked up his team option for his third year, but he still has a lot to prove in a pivotal season.

A breakdown of recent moves brings us to the present time. The Lakers find themselves with JaVale McGee, Ivica Zubac, and Moritz Wagner as their only true big men. There is no question that this is a downgrade from the previous season. They pay their centers less than almost every other team as Zubac and Wagner are both on rookie contracts and McGee is on a minimum deal. However, the Lakers are definitely getting their money’s worth with these three players. Each one offers a different skill set which makes the team much more unpredictable. JaVale McGee is a smart player who will do the dirty work that does not show up on the stat sheet. The right place, right time ideology is what best describes him, and although he may not be a playmaker, he is a playmaker’s best friend. On top of this, video has come out of him working on his three point range. Ivica Zubac, on the other hand, is not as dependent on others as McGee. He is a big man with a soft touch, and while he is far from his ceiling, he has developed a reliable mid range jump shot. Around the rim, he has a wide range of skills, including a hook shot. Lastly, Moritz Wagner has the most range out of the three. His catch and shoot is solid from the three point line and his mid range is not far behind. However, Wagner will have to bulk up to be a threat in the paint, as his lack of strength was evident in Summer League. At 30 years old, McGee has the most experience of the three players. Zubac and Wagner are both 21 years of age, meaning they are players that still need to develop despite being in a win now scenario.

The question now is, what are they going to do with that position? Many different things have been proposed. When ranking the three centers, it seems as if McGee has the edge on the two young guns. His strength inside will match well with Lonzo Ball’s playmaking and Lebron James’ playing style. Despite not being crafty on the offensive end, he makes up for it on the defensive end. He will be a great presence in the paint if used with the first unit, as defense has been a big weakness for the Lakers. Zubac seems to fit best in the second unit. His personal playmaking skills will be an advantage in a second unit which will not have as much ball movement as the starters. In addition, Zubac and his developing frame will not be tasked with guarding the starting center of the opposing team. Even so, the starting position is more or less up for grabs, and Zubac’s recent play with the Croatian National Team has been impressive compared to his skillset last season. Between the three, rookie Moe Wagner is the wild card. He has been in and out of the training facility, and has bulked up in the weight room. While he has the most to prove, Wagner has been praised by Lakers GM Rob Pelinka, who has stated that he could play very nicely alongside Lebron James. Finally, there is the possibility of a small ball lineup, without a big paint presence. The deep roster would allow them to do this while also having a strong second unit. In the end, it all comes down to what the coaching staff decides, meaning that Luke Walton will have quite a bit of weight on his shoulders this preseason.